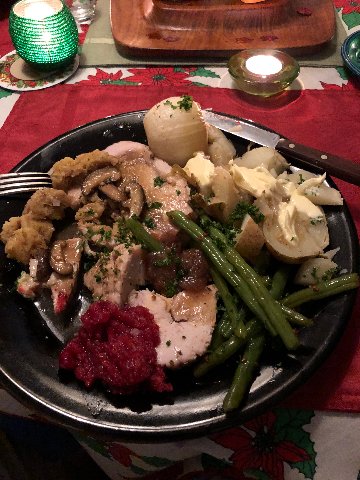 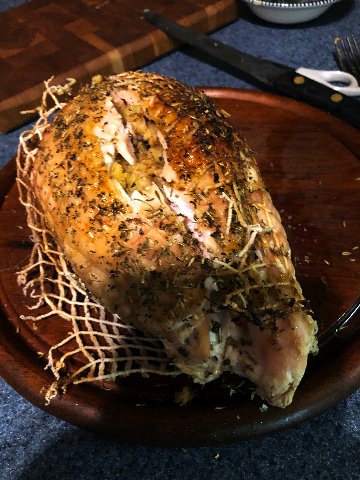 Cutting into the roast to see if it was done. 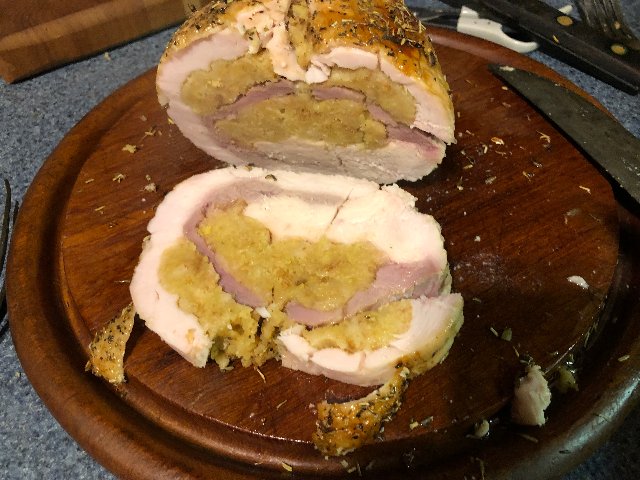 Sliced on a cutting board.

Grocery shopping for the holidays at Big Y there was a seasonal treat at the butcher station.

We had it a couple of years ago and there it was again.

The amazing concoction known as turducken.

There are numerous variations but in general it is a bound roll of three boneless breasts.

The outer layer is turkey< with duck inside that, then chicken. In the center is stuffing. The roll is bound with a string mesh which remains on during cooking.

We popped it into the oven at 350 for about an hour.

Or until the meat thermometer reached 165.

But there was a bit of a problem.

After a half hour I pulled it out, basted, and stuck in the thermometer.

Some time later Astrid couldn’t find the thermometer as she wanted to check the roast.

“It’s on the counter next to the refrigerator” I said.

Trouble is, it wasn’t.

Pulling out the roasting pan, cripes, it was still stuck in the bird. Now caput. The plastic top over the dial was melted.

So that meant eyeballing to guess when it was done. She cut into the thick center and declared it ok.

With an inch of water in the pan I had added potatoes and onions. The smaller ones were done and the rest saved to pan fry for another meal.

Set to rest I removed the mesh with scissors.

Astrid made the drippings into a gravy with minced ginger and garlic as well as port and soy.

There was still some of the wonderful fresh cranberry and orange sauce from Thanksgiving.

It made for a festive and flavorful dinner on the day after Christma know as Boxing Day in the U.K. In her native Germany it’s a three day holiday starting with Christmas Eve.

In my Sicilian/ Irish family it starts with the traditional feast of the fishes. Dad used to make octopus salad. Which was also on the table for Christmas dinner with our cousins the Sullivans.

“Gee Doc, this is great,” exclaimed my Uncle Jimmy. “What is it?”

Gasping, my uncle spat it onto his plate. Perhaps he had visions of the giant squids in Jules Verne’s Twenty Thousand Leagues Under the Sea. Our Irish relatives were strictly meat and potatoes.

Dad was always putting something tasty and exotic on the table. That happened now and then on Sundays and holidays when he took over the kitchen. The meal started on Saturday night and continued into Sunday morning. Which is why he couldn’t join us for mass. Except on Christmas Eve. We prayed for his soul.

“Dad we will all be in heaven and miss you” I told him sincerely just as the nuns had taught us.

I remember him making all those tiny meatballs for a delicious soup. Years later I realized that it was his version of Italian Wedding Soup.

Dad was the chef in our family but Mom could put a meal on the table with a fraction of the fuss or his craving for praise and attention.

But the family revolted when he served split calf heads. With gusto he downed three of them to show us what we were missing.

That sense of culinary adventure caught up with him when the family dined at Villefrance-sur-Mer. It was a picturesque fishing village on the French Riviera. There were several restaurants looking at the yachts in the cozy harbor.

It was our introduction to authentic bouillabaisse. Too much so for American palates. Except Dad of course. The dish brimmed with seafood and heat. Dad with zest wolfed down our bowls passed to him.

He was in agony for the next few days with a scorched esophagus.

In Paris trying escargot, snails of all things, our breath reeked of garlic for days.

Like father like son. I got my comeuppance in London dining for the first time in an Indian restaurant in Earl’s Court. I ordered the chicken vindallo.

“Very, very hot” the waiter warned. I managed to eat about a third. Next morning there was a ring of fire as I dubbed the experience burn twice vindaloo.

Back in the day my friends said that I would eat anything that didn’t eat me first.

My friend Phil visited me in the North End. I took him to the nearby diner. His jaw dropped when I ordered pig skin over pasta. It was like a rolled up football. I had done it as a gag. Phil fell on the floor laughing.

I was curious about the origin of turducken. This is what I found.

Credit for the creation of the turducken is uncertain, though it is generally agreed to have been popularized by Cajun chef Paul Prudhomme. The most common claimant is Hebert's Specialty Meats in Maurice, Louisiana, whose owners Junior and Sammy Hebert say they created it in 1985 "when a local man brought his own birds to their shop and asked the brothers to create the medley".

A New Orleans surgeon, Dr. Gerald R. LaNasa, was locally known for his use of a scalpel in deboning his three birds of choice, sometimes adding pork or veal roasts in the final hen's cavity, thus preserving the turducken tradition as a regional holiday favorite of the southern United States. Andouille sausage and Foie Gras were always key ingredients of the LaNasa creations. The results of Dr. LaNasa's work can be found in the modern day mass-produced turducken or turduckhen (another variation adding or substituting a cornish game hen). His turkey, duck, and chicken ballotine is now widely commercially available under multiple trademark names. Dr. LaNasa's innovation and success with ballotine, Three Bird Roast and turducken began mid century, expanding in the 1960s and seventies long before many of the popular commercial Cajun/Creole chefs of today took the stage.

In the United Kingdom, a turducken is a type of ballotine called a "three-bird roast" or a "royal roast.”