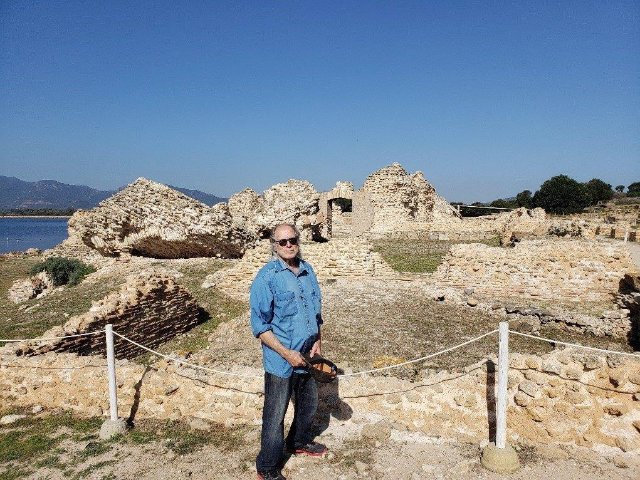 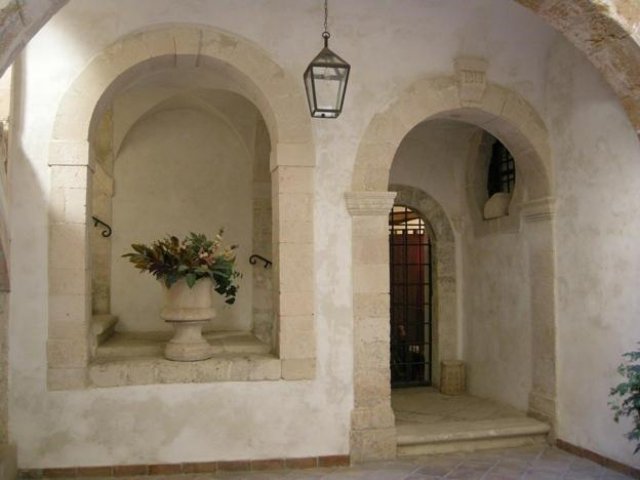 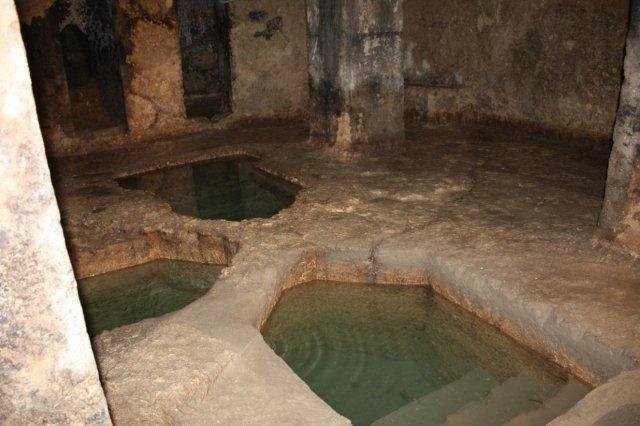 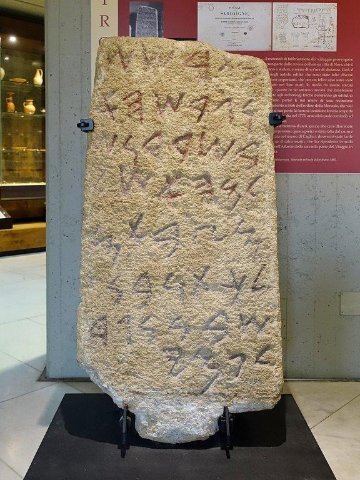 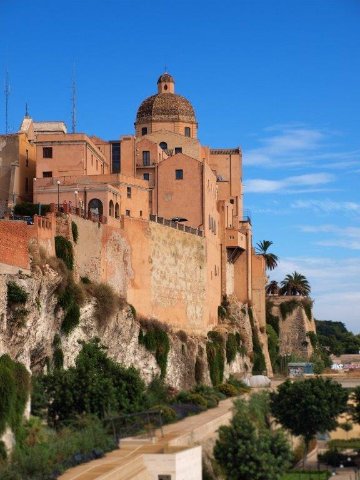 THE CATHOLIC BASILICA OF SANTE CROCE, CAGLIARI, SARDINIA BUILT ON THE SITE OF THE JEWISH TEMPLE, 1492 Courtesy M. Cristian 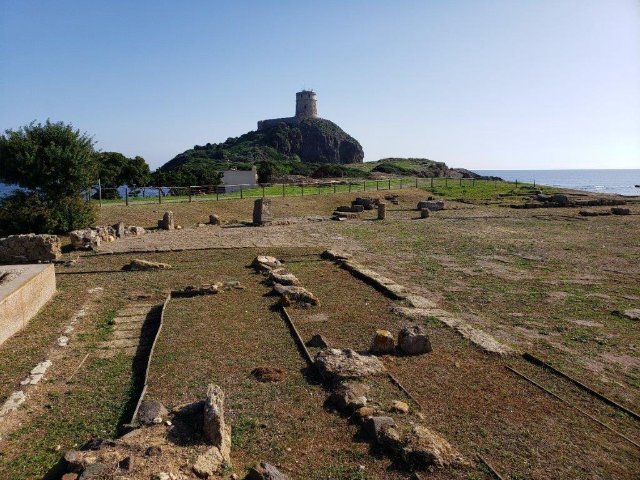 My Father passed away around 30 years ago at age 80.  I remember him telling me as a young boy, that there was an Italy Connection to the Brill Family History.  At that time, I didn’t know enough to question him.  My young life had been overwhelmed by the Holocaust.  My Father had been a Jewish Prisoner in Dachau.

Around Six years ago, I signed up for the National Geographic Family History DNA Test.  For around $125, I received a Cheek Swab Kit and some paperwork.  I was instructed to reveal nothing more than my Name and Age.  A few weeks later, I received a box which included a Printed Brill Family History based solely on the DNA I presented.

The National Geographic Report let me know that I am Jewish and that my Father’s Family started in the Middle East and traveled to Sicily around a thousand years ago.  Around 200 years later, they relocated to another Italian Island, Sardinia.  They stayed in Sardinia until 1492, when Spain Killed, Christianized or Expelled All Jews from its Various Territories.  At that time, Spain controlled parts of Italy.  The Brills were likely among Thousands of other Jews who were attracted to the supposed Safety and Opportunities in Northern Europe including Germany.

The National Geographic Report stated that my Mother’s Family was also from the Middle East, but chose the direct route to Eastern Europe.

Could any of these Stories be supported by Written Records or Peer Reviewed Archaeology?

It is believed that some of the earliest Jews in Sicily were brought there as Slaves by the Romans in the 1st Century after the Fall of Jerusalem.  Depending on who was ruling Sicily at different times, the Jewish Communities were allowed to flourish or be persecuted, but they always were restricted to Designated Ghettos.  In most cases, Jews were not allowed to publicly celebrate their religious holidays, were more heavily taxed than others and were restricted as to their livelihoods.  Life was still better in Sicily for most Jews than in other communities in Europe at that time.  The local Jewish population by the 1400s had increased to around 30,000.

That all changed in 1492, when Spain issued their Alhambra Degree which forced Jews to Leave from All Spanish Territories (officially revoked by Spain and the Second Vatican Council in 1968).  Spain controlled Sicily at that time.  It is believed that around 10,000 Jews were allowed to remain if they took the Catholic Conversion Option.  The other 20,000 Jews left their possessions and fled to other countries.  Some were burned alive and some went underground.  My guess is that the Brills arrived in Sicily around 1100 and left for Sardinia around 1350.

Curiously, over time, evidence of early Jewish life reveals itself in Sicily – an island filled with Many Historical Ruins.  In the late 1980s, a family that lived on a narrow street in Syracuse for hundreds of years and identified as one of those Jewish Families that converted to Christianity in 1492, finally sold their home to a woman developer looking to create a boutique hotel.  During the renovations, she came across vaults and dead-ended staircases blocked by boulders and sand.  After removing more than 150 truckloads of sand, what was revealed turned out to be the Oldest Mikveh in Europe.  Mikvehs were the very important Jewish Ritual Baths.  It is believed that this Mikveh was built around 500 CE and was actively used until 1492 when it was sealed to protect the owners from Death.  It remained hidden and lost to memory for more than 500 years.  The Hotel on Via Alagpna is called the Alla Giudecca and the owners have Restored the Mikveh and now offer Tours.

On the South Coast of the Island of Sardinia is the Ancient City of Nora which dates to around 1100 BCE.  Today, much of Nora is under water, but is of high interest to Archaeologists as it was one of the most important centers of Phoenician expansion in the Mediterranean.  The Phoenicians were very enterprising and were the first group to colonize both Sicily and Sardinia.  Sardinia was attractive to the Phoenicians and later to others, as it was a control point for Mediterranean shipping lanes.  Sardinia was also rich with metal deposits such as Copper, Iron, Lead and Silver.  Archaeological findings in Israel prove that Sardinian Silver was brought to Israel during the Biblical Times by the Phoenicians.  In November 2022, I hired an Archaeological Guide and toured Nora and Southern Sardinia.

In 1783, the 3 ½  Foot Tall Nora Stone was discovered under water in what may have been outside of the Main Phoenician Temple of Nora.  Since then, the text has been translated several different times, and has become an important symbol of this Ancient Trading Port.  The theme of this Nora Stone appears to refer to the need for some Magic to overcome the Drought of 730 BCE.  Some of the words are believed to be in Ancient Hebrew.

In the year 19 CE, because of some reported scandals, Emperor Tiberius exiled around 4,000 Roman Jews to Sardinia where they lived comfortably with the locals.  Things changed for the worse in 380 CE when Emperor Theodosius issued the Edict of Thessalonica which made Christianity the Official Religion of the Roman Empire.  Jews were once again abused and had to go underground in order to survive.  Things changed again in 1325, when the Kingdom of Aragon ruled Sardinia and Jewish Life was comfortable once again. It is believed that the Brills left Sicily with other Jews around 1350 and headed to Sardinia where the Jewish Community was expanding.  The Jews had many Trades and they were once again being observant in public.  The ancient Jewish Quarter of Cagliari known as the Giudaria di Cagliari became the site of a Large Jewish Temple.  This was a Happy and Productive 150 years.  That all changed in 1492 when Spain Expelled all Jews unwilling to convert to Christianity.  This is when the Brills left Sardinia and found their way to Germany.  Records show that Spain Killed around 150,000 Jews in its various Territories during this Inquisition and that around 200,000 Jews fled to other Countries. The Jewish Temple in Cagliari was almost immediately converted to an Important Catholic Church – the Basilica of Sante Croce which still stands today in a neighborhood of fine restaurants and gelato shops.  However, a garbage dump covers the Ancient Jewish Cemetery with little story telling in the local museums.   The Basilica was bombed during WWII, but is now Restored.

1492 turns out to be a Key Historical Year in Major New and Different People Movements.  The Spanish Forced Exiles of the Jews and Muslims from its Territories to New Countries is one, but it is also the year that Spain Sponsored Christopher Columbus’ Voyages to the Americas which Changed the World in Many Positive and Many Negative Ways.

The family name “Brill” probably didn’t happen until the 1500s when the Brill Clan finally arrived in the territory of Germany and were given that Local Name.  During this period, Jews from around Europe were attracted to a possible safer life under a Germanic or Polish King.  The reality in Europe was that about every 300 years, there was a major Pogrom against the Jews.  Often it was because it was believed that the present Jews had something to do with the Death of Christ or that the Jews had become Too Successful in their Trades or that the Royal Families didn’t want to Repay their Loans to the Jewish Money Lenders.  Jews during this period were only allowed to participate in certain professions which included Trades, Medicine, Money Lending and Cattle Raising.  The Brill Clan chose Cattle Raising.  Jews were not allowed to Own Land and they had to live in certain Designated Areas.  In the Lower Saxony Region of Germany, one can still find a couple very faded painted building walls advertising the Brill Cattle Raising Business.  My Grandfather Hugo Brill, split from his brothers and established his own Cattle Raising, Slaughter House and Meat Packing businesses in Westphalia around 1900.  That business was very successful, but was taken over by the Nazis in 1939 -  like what happened to All Jewish-Owned Businesses.

My Grandmother had died of an illness, but my Grandfather and his youngest Daughter fled to France when the German Government started to send Jews to its Many Work and Death Camps.  My Father’s other Sister fled with her Husband to England.  My Father was in hiding in Munich with my Mother, but was eventually caught by the Nazis and Imprisoned in the Dachau Concentration Camp.  The British Underground Smuggled him out to England in the Spring of 1939.  In France, the Nazis caught my Father’s Sister and sent her by train to the Death Camp of Auschwitz.  My Grandfather fled to the Forests of Spain and survived there for three years.  My Father’s younger Brother was caught in Amsterdam by the Nazis and shipped by train to the Sobibor Death Camp where he was Murdered.  My Mother escaped to England to meet up with my Father who was obligated to join the British Army.  The day after my Mother landed in England she gave Birth to my Older Brother.  He was named Winston to honor Winston Churchill.  While in England, my Mother learned that her Parents and younger Sister were Arrested by the Nazis in their home in Rinteln, Germany and were Sent with Hundreds of other German Jews to the Warsaw Ghetto where they were Murdered.

When WWII ended in 1945, my Grandfather came out of his hiding and made his way back to Westphalia, Germany.  My Father’s Sister Miraculously Survived Auschwitz, but didn’t want to live in Germany any more.  In 1949, my Family moved from England to the USA where we became Naturalized Citizens.  Documents relating to the Hugo Brill Family Story are in the Archives of the Jewish Museum Berlin.

Various Records show that in the Early 1900s, Europe had a Vibrant Jewish Culture consisting of more than 8 Million Jews spread over many countries.  By 1945, the Holocaust had killed off around 6 Million of those Jews.

It is only 85 years since Hitler’s Holocaust, yet the Anti-Defamation League reported 2,717 Anti-Semitic Incidents in the USA in 2021 – a 34% increase from 2020 and the highest total since 1979 – when this group began tracking such incidents.

In the 1990s, I Owned an Organic Scotch Highland Cattle Farm in Vermont and today, my Older Brother’s Son has an Animal Farm near Seattle.

And, my Younger Brother is an Expert on Columbus’ Voyages.  In fact, he Published a Book about the Relationship of Columbus and Spain in 1492.  Are these Random Coincidences?