The Moorish Heritage of Spain 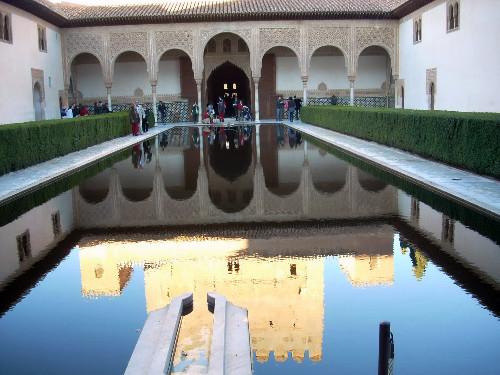 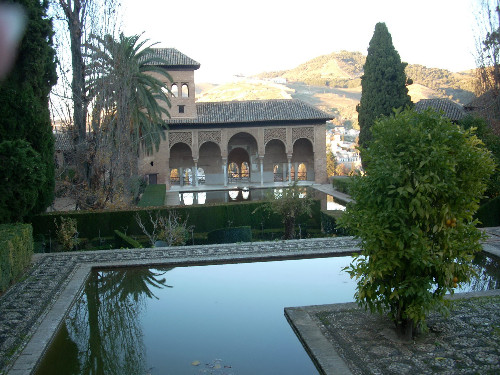 The Alhambra has many levels and villas. 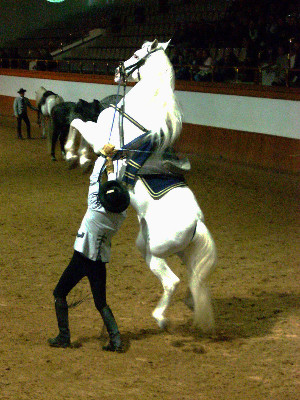 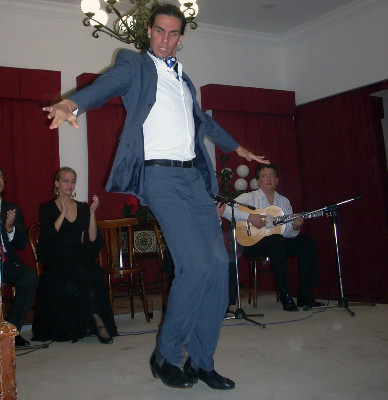 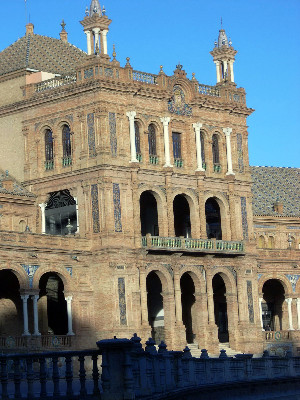 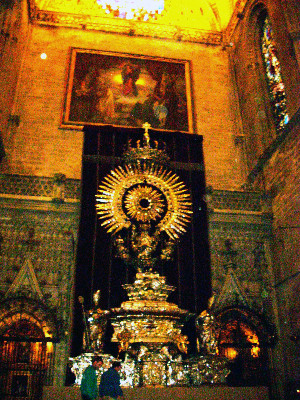 View of the main altar., 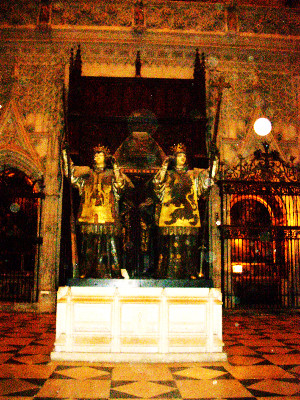 The tomb of Christopher Columbus 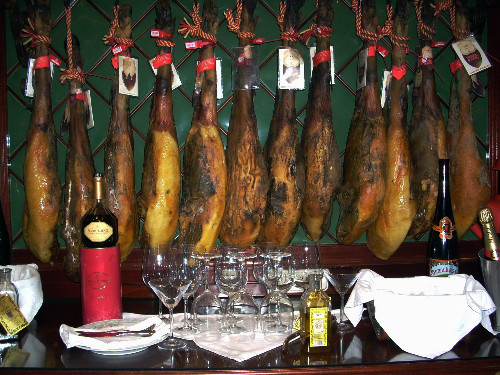 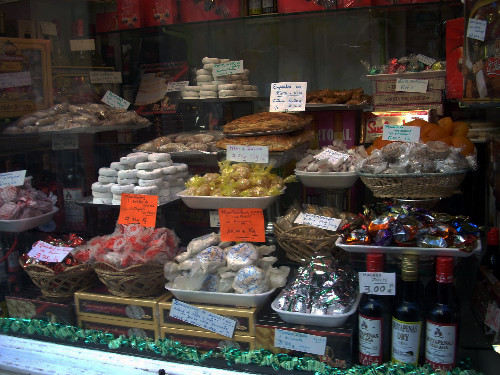 Sweets in the market. 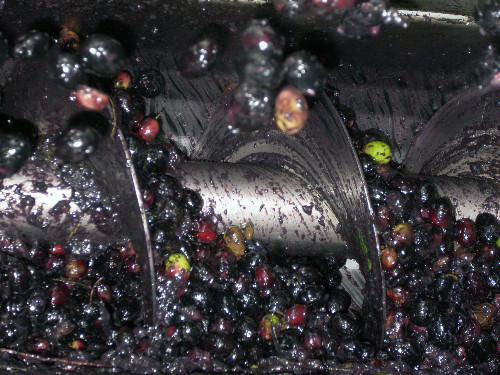 Andalusia is the best known region of Spain and warmest region in Europe.

Within this diverse land live more than seven million people. Most live in the major cities such as the eight provincial capitals of Almeria, Cordoba, Cadiz, Grenada, Huelva, Jaen, Malaga and Seville.

There is an enticing array of unique places to stay, from historic town mansions to charming country retreats, many of which are state-run paradors.

There are more bars than in any other European country, serving some of the finest seafood and Sherries. Andalusia is one of the principal European holiday destinations.

Despite the modernization of Andalusia, within just a few minutes from the cities or the coast, it is possible to step into a traditional Spanish village and sample a taste of ancient Spain.

Andalusia is the “mother” of the Spanish folklore which is probably best known abroad: here you will live the magic of flamenco and bullfighting in their most authentic style, and myths like Don Juan and Carmen were born here. Where-ever you find yourself in Andalusia; you will feel a warm and friendly welcome. Visitors are welcomed with open arms.

Iberian airline flew into Malaga airport where we started to feel the warmth of the region through a friendly welcome. After gathering our luggage, we drove an hour along a very picturesque highway to our first destination. Hotel Ritz Carlton Villa Padierna was a beautiful five star deluxe hotel, which could be the place for me to stay several days instead of one night. The deluxe hotel, themed on a Tuscan Villa is truly a destination in itself to enjoy and feel regal and pampered.

The décor and design reflect the traditional lifestyle of an Italian villa. It has a fantastic luxurious spa; Spanish cuisine provides exquisite dining and opportunity to golf to your hearts content.

My brief stay was memorable. I thought this hotel was one of the most beautiful hotels I ever stayed at.

With a population of half a million, Malaga is the second largest city in the south.

Most of the cities I visited the mode of transportation to see the city is by walking and Malaga was no exception. The streets were all narrow and filled with stones of every size and shape. Watch your step at all times, especially when looking upwards viewing the tall buildings and churches. Wear your best walking shoes, preferably with thick soles that can absorb the wrath of the streets.

We visited a few of the interesting churches and museums in the elegant central zone. This city was the birthplace of Picasso and now has a new Picasso museum, housing an important collection of work by Malaga’s favorite son, Picasso.

You will still find Picasso’s birth house at Plaza de la Mercid 15. The building is now home to the Foundation Picasso. The larger and more famous Picasso Museum can be found at Palacio de Buenavista at Calle San Augustin. It is not to be missed if you are a Picasso fan. Here you can see 155 works by  Picasso.

The spotlight is expected to shine on Malaga for some years to come since Malaga City Council decided in 2004 bid to the European Union requesting to be given the title European Capital for the year in 2016.

Grenada’s extensive history of its towns and villages, the variety of artistic styles in its monuments, render culture one of the keys to the identity and the major tourist attraction. For here, extraordinary well preserved and in a tremendous natural setting stands the Alhambra-the most exciting, sensual and romantic of all European monuments. It was the palace-fortress of Nasrid sultans, rulers of the last Spanish Moorish kingdom, and with its construction Moorish art reached a spectacular and serene climax.

It is a massive castle constructed over many centuries consisting of gardens, fortifications and sumptuous palaces. The goal of this undertaking was an Arabic attempt to create heaven on earth.

The Alhambra is considered by some to be one of the 10 wonders of the world and Spain’s most visited monument as one of the most brilliant jewels of universal architecture.

Famous American writer and former ambassador to Spain, Washington Irving took up residency in the palace in 1829. It was here that he penned his best-selling “Tales of Alhambra”, which focused world attention on Grenada and conjured up a romantic image of Andalusia which persists to this day.

In the south east of the province of Cordoba, besides the fertile plains and set in a circle of mountain is the place where olives flourish. They are the main crop of this region and Spain is the world’s largest olive producer.

Our visit to seventh generation family-owned Nunez de Pardon Organic Extra Virgin olive oil manufacturing plant was exciting and enlightening. Their unique processing of this oil preserves the flower of the oil. Many awards have been won by this olive oil.

I was able to snap a dramatic picture of the process, where olives actually look like glistening jewels. A delightful olive oil tasting and lunch was provided.

Cordova is also home to a fabulous Mosque, which is the third largest structure in Islamic world. The prayer hall is filled with almost 500 slender columns and arches with a marble floor. During Arab domination (711-1263) Cordoba was the artistic and cultural center of the “Al-Andalus” empire.

This Andalusia capital is the third largest city of Spain and very popular among tourists thanks to its unique ambience and its great monuments.

Seville has three important monuments and an illustrious history. And Don Juan, Figaro and Carmen!

A walk around Seville is a journey through time. Its narrow streets, its squares and its magnificent monuments reveal the secret of its charm to the visitor and the importance of history.

Outstanding attraction is the Cathedral, which was built on the site of a Moorish Mosque and is the third largest in Europe. It was built between 1401 and 1507 as a vast, rich and harmoniously balanced blend of Gothic austerity and Spanish flamboyance.

One of highlights of Cathedral is visiting Christopher Columbus’ tomb.

Another attraction not to be missed is The Museum of Flamenco Dancing, which sits in the historic heart of Seville. The state-of-art museum has very interesting exhibits and chance to learn flamenco dancing from the best. Flamenco is a passionate and seductive art form, mysterious and misunderstood culture that has been in Andalusia for nearly five hundred years and today flamenco has thousands of aficionados world-wide.

We ate lunch “Carmona-style” at the Parador de Carmona in the outskirts of Seville. It looked more like a fortress than a parador Foundations of the hotel date from 14th century and was last renovated in 1998. We ate at a big table and sampled their specialties: Carmona partridge with vegetables, Carmona spicy spinach and codfish pies.

We learned about sherry and did some tastings at the Valdiva and Villa del Duque Winery, where the “Magic of Sherry” spectacular amazed the visitors.

The Royal Andalusian School of Equestrian Art show of dancing horses was one of the highlights of my journey through Andalusia region. This riding school is comparable to the world-famous Riding School in Vienna.

This city is also famous because flamenco singing began here. We attended the conference on history, origin and evolution of flamenco, route of the greatest flamenco personalities of the Andalusia flamenco territories. It took place at the Casino Club in the Main Square. A tapas dinner in the casino followed the performance of singing and dancing by the best Spanish singers and dancers. The crowd showed gracious appreciation with thunderous applause.

Spaniards throw themselves whole-heartedly into eating out; shopping; going to soccer matches; spending a day at the beach; flamenco singing and dancing and spectators of bullfighting.

The Andalusia’s love their cuisine and their tasting plates of food. The cuisine of that region has been made into an art and Mediterranean products, praised by dieticians are the basis of their cuisine.

Spaniards take their ham seriously and pay for high quality. In 1862 Trevelez cured ham won a national food competition and Queen Isabelle granted Trevelez to stamp royal crown on his ham. There are even several museums of ham.

After the horse show, we ate at El Faro, where I saw the famous hams hanging from ceiling of the bar.

Daily life in Spain differs in one major way. Mealtimes are very late. Spaniards love their food. Seville lies claim to inventing the famous tapas, that little Spanish meal. Tapas are snacks, canapés or finger foods. They can be anything from a chunk of tuna. Cocktail onion, an olive skewed on a long toothpick to meat with sauce served piping hot in a miniature clay dish.

Bread is always on the Spanish table used to mop up sauces. Spanish lunches are always large! Courses come one at a time, so pace yourself,

Spaniards are night owls. The typically don’t eat dinner until at least 9 pm and don’t go to bed before midnight.

The last stop on the way home from an evening of fun might be to Churro stand. Churros are fried pastries close to donut in USA. Fresh Churros piping hot and sprinkled with sugar are best eaten with hot chocolate. What a wonderful Spanish tradition.

The magic of sherry: www.villadelduque.com