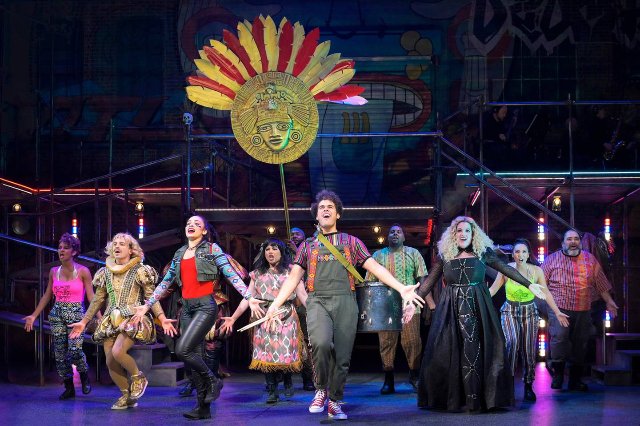 Kiss My Aztec at Hartford Stage

Here’s my list of the best Connecticut productions I saw this year. Instead of ranking them, I’ve just listed what I found particularly noteworthy.

Playhouse on Park in West Hartford is another smaller theater that scored with a high-energy production of Five Guys Named Moe. It was glorious.

Sunset Blvd received a terrific production at MTC in Norwalk. Director Kevin Connors has a way of taking big shows and making them work in his small, intimate theater.

Kiss My Aztec! ended Hartford Stage’s 2021-22 season. It is a new musical that uses humor to look at the time when the Spanish Conquistadors invaded the Aztec nations. The show was a work in progress, and many had mixed feelings about it. I saw potential while enjoying the production as presented. It is aiming for Broadway.

Goodspeed’s production of Forty Second Street made me happy. This certainly was in my top two musicals of the year.

Fun Home at TheaterWorks-Hartford was also one of the top shows. Once again, the intimate theater, excellent cast and interesting set design added an emotional punch to the musical.

The runner-up would be Ring of Fire at Ivoryton.

Though not in Connecticut, the Barrington Stage Company’s production of A Little Night Music would be in my top.

Kim’s Convenience, a play based on the Canadian sitcom that streams, got a fine production at Westport Country Playhouse. I had never seen the TV show, but the play encouraged me to look at it.

Long Wharf had a strong production of Dream House about a reality home renovation show. In addition to the fine acting, the scenic design was outstanding.

The solo show Dishwasher Dreams at Hartford Stage was both a funny and moving story of the immigrant experience.

Yale’s opening production this fall of Who’s Afraid of Virginia Woolf had strong performances from the actors playing George and Martha and was well-directed by James Bundy. It is not an easy play to see but it was well worth it.

This Bitter Earth at TheaterWorks Hartford explored the issue of how politically active we should be.

While not in my top two or three, Queen was a fascinating play about science, ethics and ambition that was produced at Long Wharf.

Straight White Men succeeded though the play is flawed in many ways. The Westport production was excellent.

Runners-up include Native Gardens at Ivoryton, Deathtrap at Legacy Theatre, and Lend Me a Tenor at MTC.

New York City: I didn’t see many shows this year. Of those I did see, Leoopoldstadt stood out as did the revival of Take Me Out, and the musicals Into the Woods and A Man of No Importance.