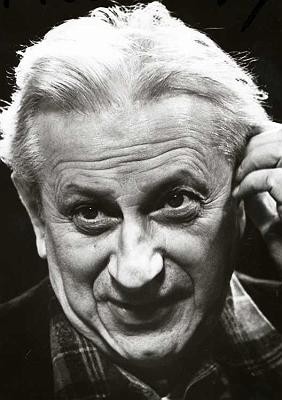 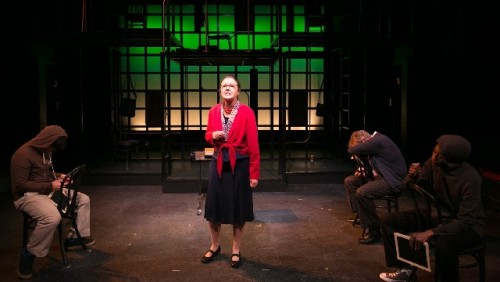 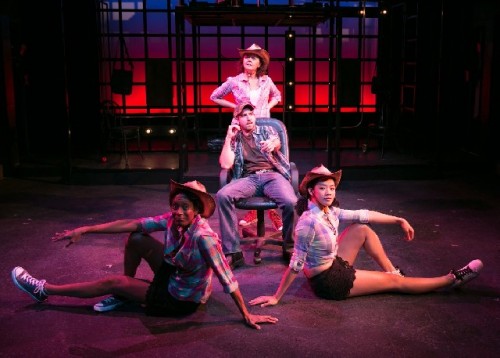 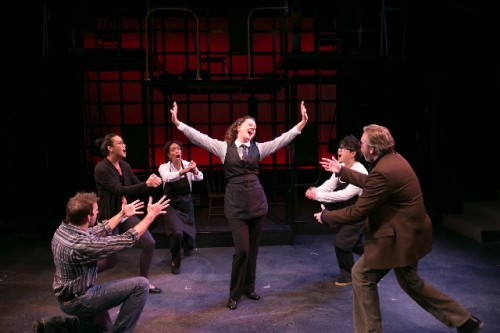 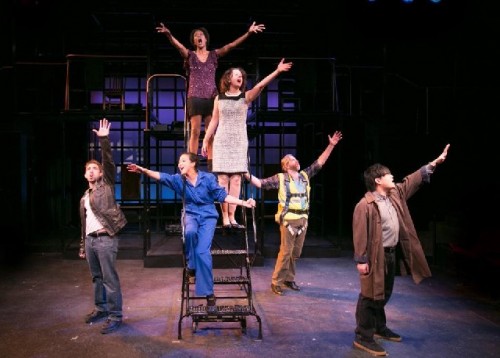 Cast of Working at Lyric Stage Company of Boston

The premise of Working now at the Lyric Stage Company of Boston is certainly compelling. Even though there is a lot of truly sincere songs and performances, the sum of this musical production is less than its parts. Based on Studs Terkel's weighty tome of insightful interviews, and often poignant descriptions of the American everyman and everywoman, this is at best a work in progress. Be it the play itself or this particular production or both, Working just doesn't work very well.

In the 21st Century, the world of work has changed, but the premise is the same as in the 20th Century: we work to make a living. Some of us live to work while others are defined by their work. Is our work who we are or what we want to be? Is it a stepping stone or platform to the rest of our lives? Or is it a rut that we cannot climb out of?

Do we see work as means or purpose? Is it our identity or just our duty? The generation now joining the workforce is quite different than those that proceeded it. Jobs are no longer for careers but for changing status and directions. Great perks no longer underscore job loyalty or job attraction as they once did. First produced in 1977-78. these more current notions have been added to the Terkel ordinary people's pronouncements in this the updated 2011 version of the show. Even so, there is a datedness to many of the story lines.

The topic of work is huge. Its implication are immense. Perhaps that is part of the show's problem. Utilizing a couple of dozen jobs as focal points, the only ones that seemed to be left out of the show are the butcher, the baker and the candlestick maker. Included are a cleaning lady, fireman, prostitute, hedge fund manager, interstate trucker, ironworker, UPS delivery man, waitress, stone mason and pr man. Each views their working in different if not nuanced ways.

However, there is a repetition to the first part of the narrative that leads to more than a bit of audience fatigue. The second part of the show is much stronger.

Starting out slowly, the show doesn't dazzle but seems to build tentatively. Though Ilyse Robbins did wonderful work last year with the Lyric’s On the Town as choreographer, here as director she was unable to make the musical adaptation of Studs Terkel’s landmark oral history succeed. It labors/sings but not always vibrantly.

Having to play multiple roles, all of the performers are enthusiastic if not brilliant. But though there are several touching moments in the  the production, the show never quite hits its theatrical stride. It seldom expresses the energy to match its substantial subject.

With that said, the cast standouts are Christopher Chew, Merle Perkins and Phil Tayler. Mr. Chew has the strongest roles to play. His retired old man suffering from dementia is a great piece of physical acting. Ms. Perkins inhabits various characters with realism and gusto, while Phil Tayler continues as with his previous performances to sing and dance with vitality and energy.

The set by Anne Sherer is spare and utilitarian without being aesthetically interesting. It is copper piping and a movable staging ladder. Here minimalism demonstrates that sometimes less is just less. John Malinowski lighting designs underscore and backdrop rather than evoke an environment.

Instead of a bold statement of professional purpose, this is just a production of of echoes of mostly unwanted experiences. The narrative goes from a sort of socialist dissidence to a sense of personal pride with all kinds of thoughts thrown in. Here a great even grand idea is not presented as boldly as is necessary.