Once on This Island

Music al Revival at Circle in the Square 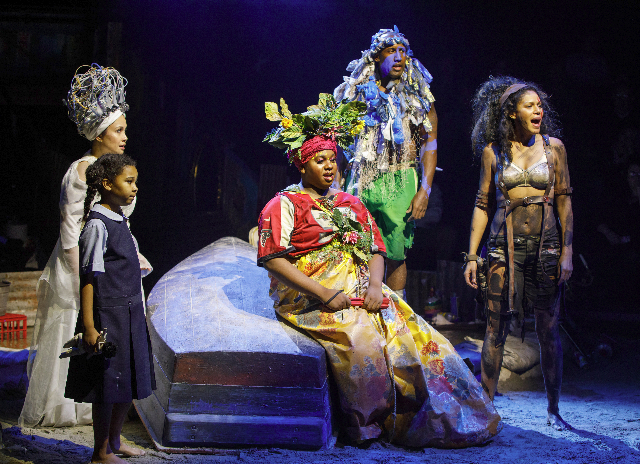 Joan Marcus production photos courtesy of Circle in the Square. 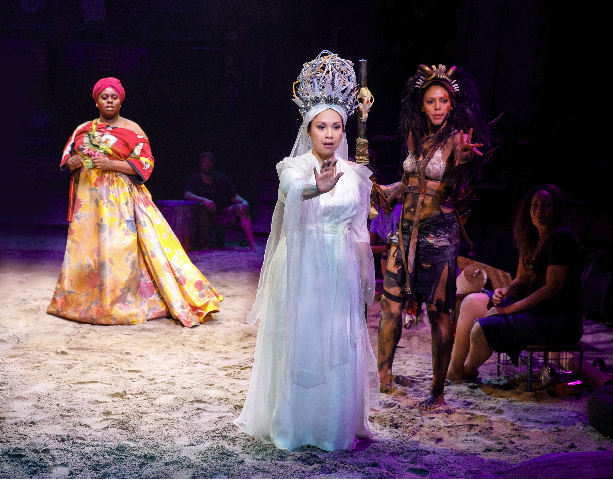 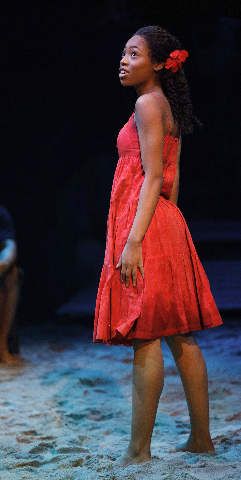 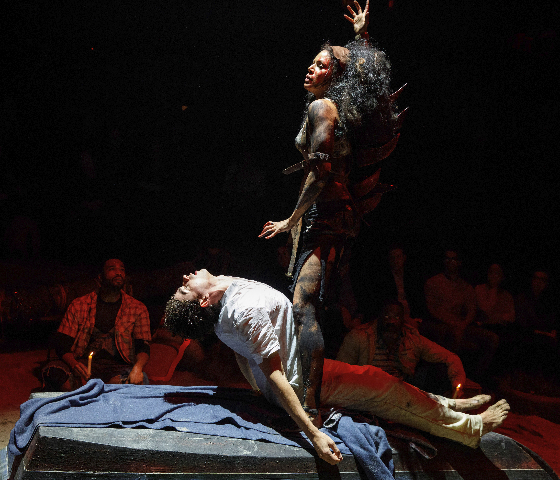 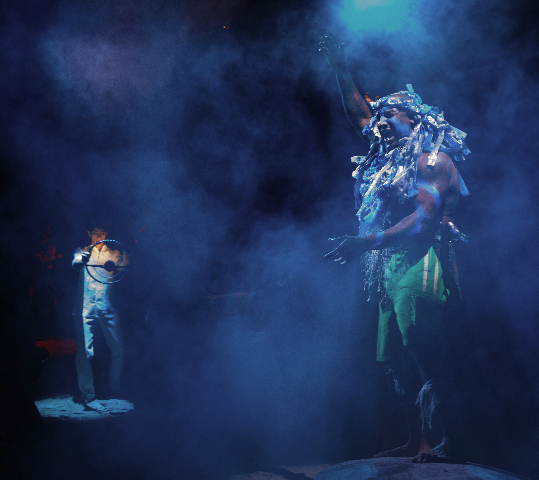 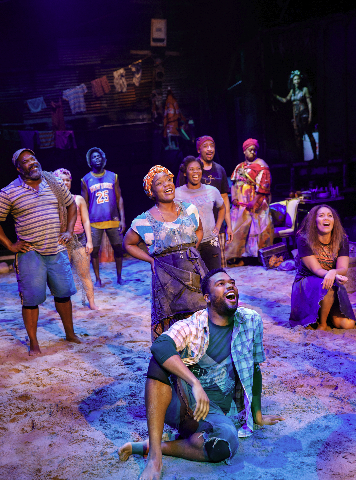 No one would blame you if, upon entering Circle in the Square, you had an irresistible urge to kick off you shoes, take off your coat, and order a tropical drink.

That’s the kind of atmosphere that Once on This Island inspires. This revival of the 1990 musical, now at Circle in the Square immediately creates the Caribbean atmosphere. Not the atmosphere of the wealthy residents or the port areas where the cruise ships dock, but the other side of the island, where the residents live. As you walk in you see clothing hung along the walls of the theater, as though they are on clotheslines or trees.

Circle in the Square features a large rectangular playing space with the audience seated all around and above it. Here as you settle into your seat, you see sand everywhere. You are looking down on a village, with various ramshackle buildings, clotheslines and more. Before the show starts, various cast members are on the beach and even a goat makes an appearance. It certainly sets the mood.

Unfortunately what follows is only partially successful. That may be due to the source of this musical – a 1985 novel by Rosa Guy entitled My Love, My Love; or, The Peasant Girl. The plot seems bifurcated. Is it the telling of an island myth? Is it a Romeo & Juliet story? Some have said it draws on Hans Christian Anderson’s “The Little Mermaid.” With so much going on it is easy to get confused.

As a huge storm blows through the island, a small girl is frightened. From there we are cast into another story of a young woman, Ti Moune who falls in love with one of the wealth islanders after saving him from drowning and nursing him back to health. Four gods and goddesses are involved in the story of Ti Moune and Daniel Beauxhomme which, as many myths must, ends both unhappily and yet inspiringly.

The problem for me was that the more I thought about this story, the more confused I became. Was the young frightened girl at the beginning the reincarnation of Ti Moune?  What were the four women Goddesses of? Was one a God? Why did one of them wear a stethoscope at the beginning of the show? What was the point – that we sacrifice ourselves for love?

The score by Stephen Flaherty and Lynn Ahrens (she also wrote the book), is tuneful and captures the feel of the Caribbean.

Director Michael Arden has used the playing space extremely well. The scenery by Dane Laffrey extends up some of the aisles; Arden uses the aisles extensively for entrances and exits. When we left the theater, evidence of sand was everywhere. This uses of aisles and even some interaction with the audience keeps us involved and brings an intimacy to the piece. You are both spectators but also feel like participants, when performers are singing next to you.

Chris Fenwick, the music director does an outstanding job with this mainly sung-through piece. For a 90+ minute show, there are over 20 songs plus some reprises. It is well sung.

Two other members of the production team did exceptional work.  The costumes by Clint Ramos are spectacular. Plus lighting designers Jules Fisher and Peggy Eisenhauer created wonderful effects on this stage.

It is mainly an ensemble show, with one major exception. Hailey Kilgore as Ti Moune is the central character and she must grab us. Kilgore does. She displays a fine singing voice and the optimistic and romantic nature of the character. She is a new face, that I hope to see in other shows.  The primary “name” performer is Lea Salonga who plays one of the Goddesses. She is more like a Cinderella fairy godmother. But her one solo, “The Human Heart” is lovely.

Two other songs stood out; “Forever Yours” a love song sung by TiMoune and one of the Gods and “Mama Will Provide” which stopped the show the night I saw it. It’s given a rousing performance by Alex Newell.

Isaac Powell as Daniel is fine as a person that is hard to like – he is entitled and snobbish, rejecting true love in order to up-hold family expectations. Powell could bring more strength to the role.

Overall, your reaction to Once on This Island may depend on how you react to this fairy-tale, mythic story that attempts much symbolism. You will either be totally enchanted by the characters and the island or you will walk away with a shrug.

It is at Circle in the Square, 235 W. 50th Street. Tickets are available through Telecharge.

Posted courtesy of 2 on the Aisle.