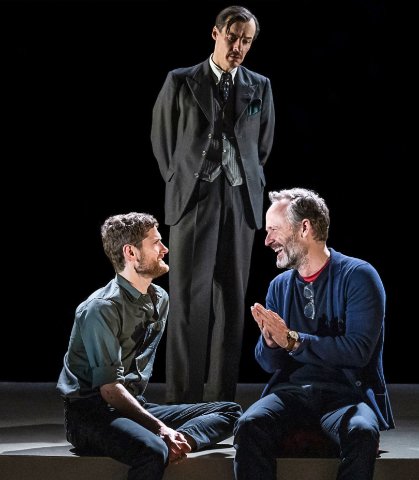 Matthew Lopez’s epic The Inheritance raises fascinating questions that as people we have been grappling with for years.

What do we owe to previous generations that sacrificed and fought for us? What is our responsibility to each other?

We meet a couple (Toby Darling, a budding playwright, and his partner, Eric Glass) and a group of their friends just before the 2016 election: The group is optimistic about the future though there are the normal relationship problems between some of the couples.

You may have heard that the play bears some resemblance to E.M. Forster’s Howard’s End. It seems that Foreter is an author who Toby admires. The play opens with a discussion of first lines and the one that is quoted is from that book:

Forster is actually a character in the play. He appears at various points; at times the others argue with him, particularly in the second part. After all, Forster was a homosexual, who even though he lived until 1970, never acknowledged his sexuality. His only “gay” novel, Maurice, was published posthumously in 1971.

Even if you have never read Howard’s End or seen the award-winning 1992 film, you will not miss very much. A cursory knowledge of the book will let you see certain similarities, but it is totally enjoyable and moving on its own.

During the 2016-18 period, the time covered by the two parts, much happens to the characters. Just as in the novel, we have socioeconomic discrepancies, unethical behavior and romantic entanglements.

But most of all we have an engaging and emotional story.  As a counterpoint to the group of young friends, we have the closeted Forster as a commentator and an older couple Henry and Walter; Eric becomes involved with each of them. They are the generation that lived through the AIDS crisis, seeing the hysteria, the fear and the deaths of dozens of friends. How each responded differently to the crisis is a part of the story.

If it sounds complicated, it isn’t really.

The play also raises the concern that the current generation of gay men have forgotten or are ignoring the lessons learned during the crisis. While they have gained much – legal protections, the right to marry and more – it seems that some have forgotten the need to still prevent the spread of the disease.

At times you may be disturbed by the graphic discussions of sex and drug use.

Inheritance was originally commissioned by Hartford Stage; its premiere was at London’s Young Vic, directed by Stephen Daldry where it won raves and numerous awards.  His production has moved to Broadway with the main actors recreating their roles and a supporting cast of American actors playing what are called the “Young Men” – they are achorus but also take individual roles of members of the friend group.

Kyle Soller plays Eric brilliantly; to me this play is his story more than Toby’s played by Andrew Burnap. Both are brilliant in delineating these opposite characters: Toby a hedonist and Eric the more grounded of the two. Samuel H. Levine plays Adam and Leo – both young men to whom Toby is attracted. Lopez has made the two almost mirror opposite of each other; Adam more focused and Leo the street hustler.

Paul Hilton plays both Morgan (the Forster character) and Walter. These two are very different and Hilton creates two distinct characters but shows some of the similarities between them. John Benjamin Hickey plays Henry Wilcox, Walter’s partner. This is a difficult role because Henry is a mass of contradictions – father of two sons, a multi-billionaire and a political conservative. Lopez, though the characters attack Henry’s views, doesn’t make him a punching bag. Henry gives as good as he gets.

Lois Smith has a brilliant cameo late in Part II as the mother of one of the earlier AIDS victims that Walter helped. That and the ending of Part I, are the emotional highlights of the play. They are stunning and certainly there weren’t many dry eyes in the theater after each.

Daldry has directed this with an even hand, turning the group of friends sometimes into a Greek chorus and at other times, letting them create individual characters. He is aided by the entire production team – the lighting by Jon Clark, sound by Paul Arditti & Christopher Reid, music by Paul Englishby and the design by Bob Crowley, who gets nearly equal billing with Daldry.

It is easy to compare Lopez’s work with Kushner’s Angels in America. The similarities include that both plays are long and deal with AIDS and homosexuality in America. But while Kushner’s play was more fantastical, Lopez’s is more realistic and funnier.

The Inheritance is at the Ethel Barrymore Theatre, 243 W. 47th Street. Tickets are available through Telecharge.

Two on the Aisle.