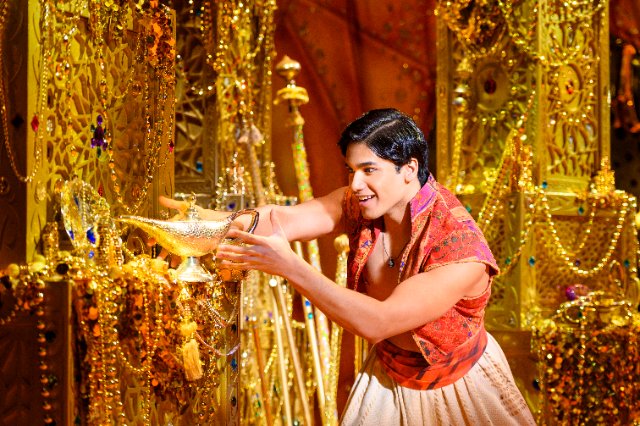 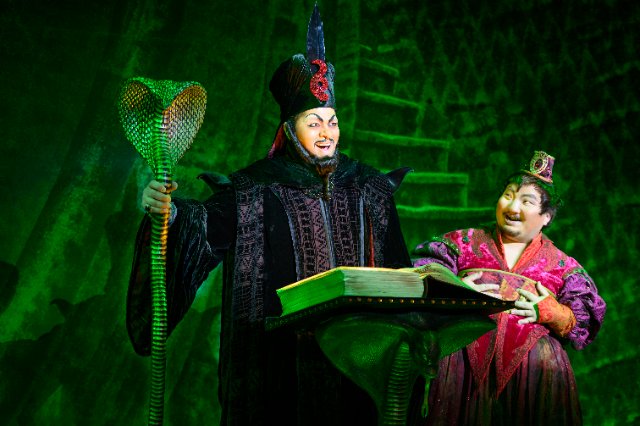 Photo by Deen van Meer Jafar (Anand Nagraj) and his sidekick, Iago (Aaron Choi) cook up a scheme in Aladdin.

The last time Aladdin visited South Florida, life as we knew it was still operating.

Specifically, a little less than three years ago, in January 2020, virtually nobody had heard of COVID. And a vibrant national touring production of Disney’s Aladdin played the Broward Center for the Performing Arts in Ft. Lauderdale. Perhaps, back then, some of us took the show’s breathtaking magic and spectacle, as well as the power and joy of live theater, for granted.

About two months after Aladdin’s early 2020 Ft. Lauderdale run, a “whole new world” invaded our lives. Certainly, it was a scary, lonely, and unpredictable world. It traumatized countless individuals and killed many. Merely being with other people was dangerous. Of course, experiencing the magic, immediacy, and vibrancy of live theater with an auditorium full of people was out of the question. Unquestionably, if we were each granted three wishes back then, most of us probably know what they would be.

Unfortunately, it is wishful thinking to hope for granted wishes with the wave of a wand. And the “whole new world” that COVID brought with it is still here. But at least we are now able to gather together again, in person, and experience Aladdin’s jaw-dropping visuals. This time, we watch the magic and breathtaking spectacle with renewed appreciation, awe, and gratitude. At least, that is how this critic felt recently while experiencing Aladdin for the second time in about three years.

The beloved show, based on the award-winning 1992 Disney animated film, which an ancient folk tale inspired, is making its Miami premiere with a vivacious and believable equity national touring production. It remains at the Adrienne Arsht Center for the Performing Arts of Miami-Dade County through Sunday before heading to venues in other cities.

Somehow, those gorgeous, glistening costumes shine brighter than they did three years ago. To give you an idea of how sparkling they are, there are 8,644 Swarovski Crystals in a single Aladdin costume, according to the show’s website. And the show’s 84 special effects, which include a flying magic carpet? They astound us more this time around, perhaps due to our renewed appreciation. The applause I heard for the magic and energetic performances seemed to last longer and sounded louder.

Chances are, many of us are familiar with Aladdin. But for the uninitiated, the titular character is a street urchin in the fictional Arabic town of Agrabah. Meanwhile, Jasmine is the beautiful daughter of the sultan of Agrabah. While visiting her exotic palace, the title character stumbles upon a magic oil lamp. It unleashes a powerful, wisecracking, larger-than-life genie. He can, with restrictions, grant three wishes. But first, the titular character and the genie must stop the evil sorcerer, Jafar, from overthrowing Jasmine’s kingdom.

No doubt, while witnessing Aladdin, eyes widen at what resembles real, glistening gold over which 1848 California Gold Rush miners would have salivated. And jaws drop when we witness magical transformations and characters’ sudden appearances, as if out of thin air. In addition, when the titular character and Jasmine, on a “magic carpet,” ascend into a starry night sky, we wonder what is the secret behind such magic.

If you are looking for a satisfying meal, Aladdin offers it in the form of a festive feast for the eyes. There is plenty in this show that will delight the kiddos. In fact, at one point during the reviewed performance, one could hear the voice of a child in the audience repeat what a character said on stage.

While Aladdin appeals to children, adults will appreciate the show’s messages. They include be yourself,  value friendship, avoid greediness, and realize that money cannot buy love. Meanwhile, it is tempting to think about what we would wish for if we were granted three wishes.

With all of the eye candy that Aladdin affords, it can be easy to overlook such messages and even uncomfortable moments. Namely, you may be uncomfortable whenever the Genie, whom a black performer portrays, notes that he is a “slave” to his lamp. Surely, with racial tensions as thick as they are today, that can be hard to hear. Needless to say, it is easy to cheer when the titular character frees the Genie.

Also, it is easy to appreciate some of Aladdin’s humor, such as when a character asks, in surprise, “People pay to watch people sing and dance?” Other attempts at humor are lame. For instance, when Jafar tells the title character, “You’re the chosen one, my boy,” the young man responds, “I think the chosen people are to the west.”

While Aladdin certainly shines in some areas, it falls short in others. For instance, none of the characters feel like three-dimensional people. In particular, we learn nothing about the titular character’s backstory, other than the fact that he lost his mother when he was young. Also, we learn practically nothing about Jasmine. At least the musical, unlike the animated 1992 Disney film, includes a touching ballad, “Proud of Your Boy.” It fleshes out Aladdin (the character) just a bit. Through the song, the titular character earnestly communicates his wish to please his mother, even though she is deceased.

From a music standpoint, many of Alan Menken’s songs are catchy and Howard Ashman, Tim Rice, and Chad Beguelin’s lyrics are simple and heartfelt. Beguelin’s engaging book is also one of the show’s strengths.

Many may argue that the showstopper is the rousing, eight-minute number “Friend Like Me.” However, the glorious “Prince Ali” is also a worthy candidate. Meanwhile, the opening song, “Arabian Nights,” contains a welcoming, lively melody. And a sense of wonder suffuses the familiar song, “A Whole New World.”

In the equity national touring production playing in Miami, Adi Roy, as Aladdin, sings "Proud of Your Boy" with believable sincerity and conviction. In general, Roy lends the titular character an impulsive and brave demeanor that seems appropriate. Also, appropriately, Roy has created a nimble Aladdin.

Roy, and Senzel Ahmady, as Jasmine, make us believe that the characters are in love. Ahmady also imbues Jasmine with a convincing independent streak, and an assertiveness that makes the character a woman ahead of her time. Undoubtedly, Jasmine is a strong female character who is “not a prize to be won!” as she asserts. Ahmady says the line with conviction; you want to shout, “You go girl!”

You also want to loudly commend Macus M. Martin for his tireless effort as the Genie. Martin displays a boundless charisma and stamina, especially during the eight-minute “Friend Like Me,” a calorie burner to be sure. Afterwards, the actor took a well-earned breather while still staying in character. What is particularly impressive is that Martin not only imbues the Genie with boundless energy, he makes it look natural. And the actor’s comic timing is spot on.

Other cast standouts include Anand Nagraj as a sinister and sly Jafar, Aaron Choi as a buffoonish Iago, and Sorab Wadia as a commanding and loyal Sultan.

These triple threat performers act, sing, and dance strongly on Bob Crowley’s handsome, stately set, which lighting designer Natasha Katz illuminates with mood-enhancing lighting. Katz deftly contrasts realism from nonrealism through her work. And as gorgeous as Gregg Barnes’ character-appropriate costumes are, they do not appear to hamper the performers’ movements.

Despite its flaws, Aladdin is a musical that will enthrall all ages. Go and enjoy. You will appreciate this show’s magic, and the magic of live theater in general, even more this time. It’s still a “Whole New World,” but at least we have access to vaccines and COVID-combating medicine.

A national equity touring production of Aladdin is playing in Miami through Sunday. Remaining showtimes are 8 p.m. Friday, 2 and 8 p.m. Saturday, as well as 1 p.m. and 6:30 p.m. Sunday. Ticket prices range from $39 to $139. You may buy them at the Arsht Center box office, by calling (305) 949-6722, or online at www.arshtcenter.org. The Arsht Center’s address is 1300 Biscayne Blvd. in Miami. For information about future touring stops, go to https://www.broadway.org/tours/details/aladdin,1402.