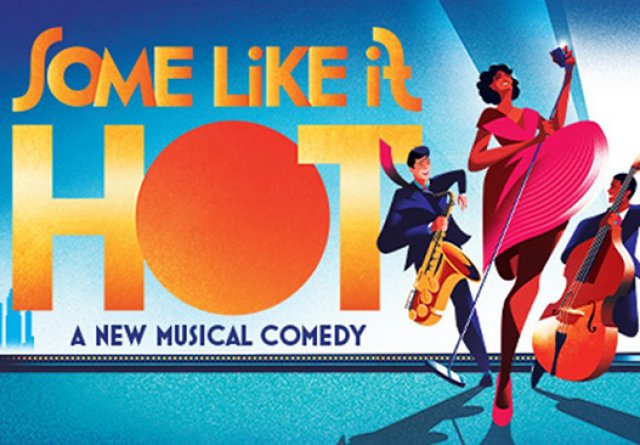 Some Like It Hot is fun, tuneful and worth spending Broadway prices to see. Is the musical really an adaptation of the classic slapstick, Billy Wilder comedy?

Not really. The creators – Matthew López and Amber Ruffin, who wrote the book, Marc Shaiman, the composer, and Scott Wittman and Shaiman, who did the lyrics –  only keep the broad outline of the film’s plot.

It is about two musicians (male) who witness a gangland slaying and are on the run. They end up pretending to be women, playing in an all-female band.  The film with Marilyn Monroe, Jack Lemmon, Tony Curtis and Joe E. Brown focused on the slamming doors, fast changes, and the almost catastrophes.

This version, instead, of focusing on the near disasters, is all about identity and self. Yes, the two musicians witness a murder; yes, they dress as women and join the all-female band. But this is not slapstick but an exploration of each musician learning about himself and accepting who he really is.

Do these changes reflect our current discussions about fluid sexuality? Perhaps the day of heterosexual men pretending to be women, with all the jokes about that, is passé.

Some Like It Hot exhibits all the current trends of Broadway musicals. It is loud and over-amplified to the point of not being able to understand the lyrics. Most songs are belted, and each number starts at such a high-energy point that there is no way to build to a climax.

Director Casey Nicholaw – who also did the fine choreography – has slowed down the pace of the story a little, in keeping with the more serious overtones.

He is blessed with a fine cast. Christian Borle plays Joe (who becomes Josephine) in what was the Tony Curtis role. Borle is known to overact at times, and he does so to some extent here. It’s more that you never feel anything about the character – you don’t even dislike him for his manipulations and deceits. I never thought I would say it, but Borle was bland.

Adrianna Hicks has the unenviable task of playing the role that will always be identified with Marilyn Monroe. Hicks sings and dances up a storm. She and the authors have created a different Sugar. While you guessed at Monroe’s innate smarts, here they are more obvious.

You might have thought of Monroe’s Sugar as the dumb blonde who is easily taken advantage of (though it never was actually the case), here the character has more clearly stated dreams and ambitions. Hicks is very good though she doesn’t project the sexuality of Sugar like Monroe did (could anyone?). The real problem in the performance is that all the songs begin “big” and have little room to get “bigger.” The same goes for the role; you don’t see a change in her.

Three performances stood out: NaTasha Yvette Williams as Sweet Sue, J. Harrison Ghee as Jerry/Daphne and Kevin Del Aguila as Osgood. Williams benefits from the expansion of role of Sweet Sue, the bandleader. Here she combines motherly concern for her “girls” but also a tart wit and awareness of the world around her. She sets the tone with the opening number, “What Are You Thirsty For?”

It is Kevin Del Aguila as Osgood that almost steals the show. Every time he appears, you laugh; he created a multi-dimensional character.

Adding to the pluses of the show are the scenic design by Scott Pask, including the Hotel Coronado in San Diego, the costumes by Gregg Barnes that capture the ‘30s look and the lighting by Natasha Katz.

Shaiman and Wittman have given us a typical Broadway score that sounds both ‘30ish and modern. I might not have gone out humming the tunes, I expect that if I hear them a few more times, I will. Certainly Sugar’s numbers – “A Darker Shade of Blue” and “Ride Out the Storm” as well as “Dance the World Away” and Daphne’s “You Coulda Knocked Me Over with a Feather” are terrific.  But let’s admit that the second act opening number, “Let’s Be Bad” owes a lot to Cole Porter’s “Let’s Misbehave.”

At the end, I was still wondering why the authors moved the show from the 1920’s to the darker 1933; the height of the depression. Was it just to celebrate the end of Prohibition? I hope not.

Before the show opened, many wondered how the authors would account for the interracial romances in the show, given that the band heads to Miami in 1933. Even Sweet Sue makes a wry comment about her going to Miami. Instead the band departs for San Diego, but while that partially solves the problem, it still doesn’t effectively deal with the societal issue around the romances.

Despite some qualms, Some Like It Hot is a very enjoyable evening’s entertainment. It is at the Shubert Theatre, 225 W. 44th Street.