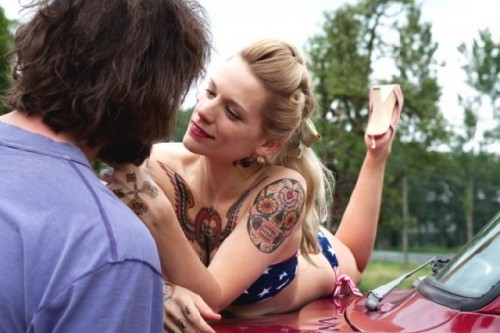 Elise is a tattoo artist. 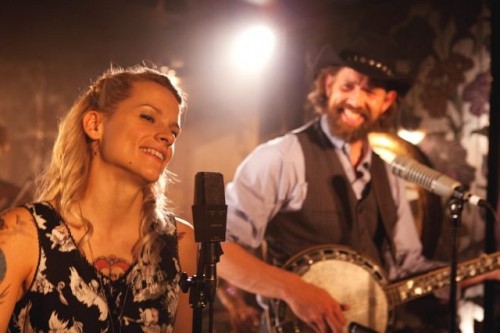 Foreign films, thankfully, are still mostly character-driven and require strong stories to underpin the emotions and actions that appear on the screen.  Screening at the 25th Annual Palm Springs International Film Festival (PSIFF) is the intense, powerful and thought-provoking film “The Broken Circle Breakdown”, Belgium’s Official submission as Best Foreign Language Film for the 2014 Oscar.

“Broken Circle Breakdown”, masterly and sensitively directed by Felix Van Groeningen, from a script written with Carl Joos, is a story that resonates with audiences in a bitter/sweet way.  Potent forces and emotions are unleashed in this film concerning the healing power of the grieving process, the role of guilt in personal relationships, the part played by unconditional love, and the reality and finality of death.

It’s a story that could take place anywhere, however, this is a poetic and poignant story revolving around a young family that takes place in rural Belgium.  Elise (brilliantly played by Veerle Baetens, and Didier, (a towering performance by Johan Heldenbergh) fall in love at first sight (yes, it still happens).  Elise works as a tattoo artist and Didier plays and sings in a bluegrass band.  They are drawn to one another by their shared enthusiasm for American music and culture (he is a bluegrass fanatic whose idol is Bill Monroe, she’s an Elvis fan) who jump headlong into a passionate relationship.

Didier has a passion for all things American.  He dresses, looks, and acts like a cowboy, calling his farm a “ranch”; raising cows and horses in between his bluegrass music gigs is part of the charm that attracted Elise.  Her passion is tattooing.  They adorn a great part of her lithe and attractive body.  Tattoo’s are not for Didier but on the beautiful Elise… well that’s a different matter.

When Elise becomes pregnant, and delivers a daughter named Maybelle (an adorable young Nell Cattrysse), Didier and Elise’s relationship moves into a “parental mode” which both relish.  He proposes to her during one of his bluegrass gigs, propelling their love story to a new level, and Elise eventually joins the band as a solo singer, and the band becomes increasingly popular.

The ultimate test to their relationship comes when Maybelle, now seven years old, is diagnosed with cancer.  The scenes during her treatment periods are both heart -wrenching, and uplifting.  The film walks a thin line between melodrama and being a tearjerker.  But the performances of Baetens and Heldenbergh, never fall into bathos.  Both gifted actors are firmly anchored in the reality and the moment of the film and its complex and powerful message and story.

“The Broken Circle Breakdown” is not structured in a linear format.  There are many flashbacks punctuated with musical bluegrass interludes, which then help move the narrative forward.  The music for the film composed by Bjyorn Eriksson is just terrific, becoming a haunting leit-motif that lends an aura of grace and tranquility to the visuals created by director Van Groeningen and his cinematographer Rueben Impens.

Together, the creative and artistic teams have combined to render a modern European film with an “old world “ philosophical feel to it.  But it’s not without some controversy.  The decision concerning what some might consider as “assisted suicide”, even in a hospital setting, maybe a point of contention and/or discomfort for some American audiences (precisely a point made in the film).

I had an opportunity following the film to meet director Van Groeningen.  He is already on the film industry’s 10 Directors to Watch list.  This is his fourth feature film, which he said was made for about $ 2 million dollars, and took one year to make.

He also added, the editing process is a key component in his filmmaking career.  “I sit in the editing room with my editor, however, I never touch the equipment.  We just keep rearranging and shifting the scenes until the magic begins to happen.  Filmmaking is quite an emotional roller-coaster ride” adding, “If you asked me ten years ago would I ever make a movie where music played a large part in the story, I would have said No, yet here we are in Palm Springs with a film where music is intrinsic to the story.”

Van Groeningen is a filmmaker with a wealth of personal vision, and that’s what it takes to get quality films made.  There is no doubt that “The Broken Circle Breakdown” is a powerful, quality movie that is richly filled with thought-provoking ideas, images, and emotions about life, love, marriage, and death.  It’s an impressive piece of work.

It will be a strong contender, for Best Foreign Language Film, come Oscar time on March 2, 2014.