Dazzling Architectural Allusions at the deCordova 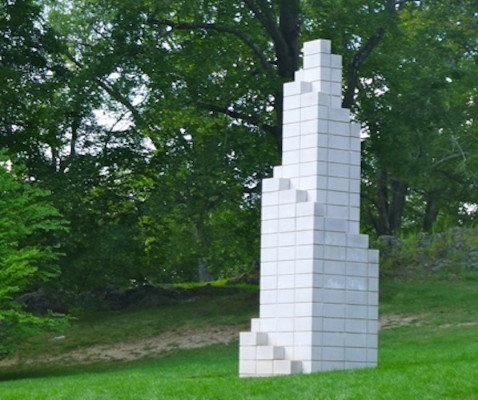 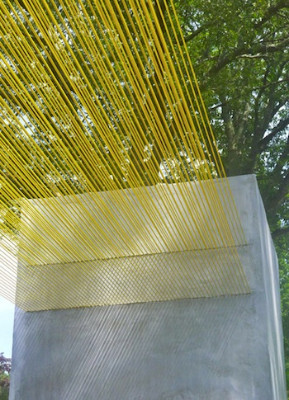 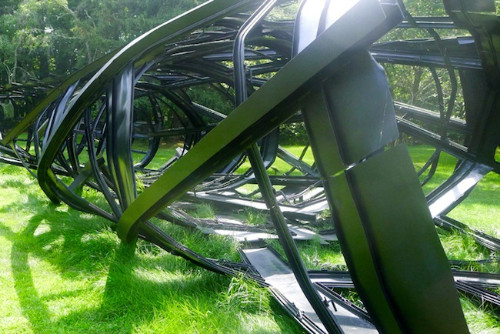 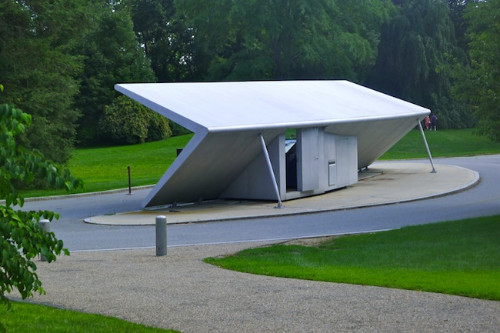 During the previous curatorial regime, entering the deCordova Museum’s Sculpture Park was like walking into an overcrowded elephant’s graveyard of mediocrity. Justifying its acquisitions by reason of limited budgets, almost everything the institution accepted was a gift or loan from artists or collectors who most often donated their second, third or even fourth tier larger works. A couple of decades of this awkward curatorial process created an uninspired and crowded mélange of  pieces of varying qualities. Instead of collecting, the deCordova seemed to be warehousing large sculptures with little logical rhyme or reason.

Thankfully, times have changed and for the better. Current Chief Curator Jennifer Gross has cleaned away the previous hodgepodge and is focusing on an astute placement of quality pieces. Now the visitor walks into the Sculpture Park and finds a collection of strong, well-placed aesthetic statements. One of deCordova’s first thematic outdoor exhibitions, Architectural Allusions, offers an illuminating example of what the institution is up to. This astutely curated exhibit, which includes an international group of carefully selected new commissions, long-term loans, and permanent collection artworks, explores the presence of architecture in contemporary sculpture.

Sculptor Stephanie Cardon’s Beacon is constructed of two 11 ft high concrete pillars connected by a lattice made from thin yellow electrical cables. The Boston-based artist has created a structure that takes the form of a passageway that visitors can walk under and look through. Though the structure’s form appears to be more bridge than shelter, the brightly linked elements generate a surprising poetic quality.

Los Angeles-based Oscar Tuazon created Partners for the deCordova in 2014. A concrete beam extends up and over to connect with one of the Sculpture Park’s maple trees; the structure forms an architectural lintel between the natural and the man-made. This elegant hybrid sculpture visually suggests a gateway as well as a shelter.

For over half a century, Dan Graham has traced the relationship between architectural environments and their inhabitants through the creation of what he calls “pavilions.” Activated by the presence of the viewer, they produce a sense of uneasiness, a vision of psychological alienation that arouses feelings of inclusion and exclusion. Graham’s two-way mirrored glass pavilion sculpture Crazy Spheroid: Two Entrances deals with the notion of enclosure. While walking into and around the reflective ‘half-ellipse’-shaped structure, a viewer’s perception is significantly disrupted. The piece establishes unexpected relationships between our own body and the surrounding landscape of the Sculpture Park.

Ancient ziggurats and the zig-zag shapes of various modern skyscrapers are probably the inspiration for the evocative Tower (DC) by the late Sol LeWitt. This piece, like much of LeWitt’s body of work, could be called an example of geometric minimalism. Here the artist creates a structure out of building blocks or cubes. Previously on extended loan to the institution, the deCordova recently acquired Tower (DC) to honor longtime gallerist Barbara Krakow.

Resembling the skeleton of a coiled headless dragon, Tower, a monumental pillar by Polish artist Monika Sosnowksa, was installed in May 2015. Measuring over 100 feet long, Sosnowska’s sculpture is among the deCordova’s largest installations. Set horizontally rather than vertically, Tower directly references the iconic architecture of Mies van der Rohe, notably his Lake Shore Drive apartments in Chicago. Based on a portion of the building’s steel façade, the artist has twisted the sculpture into a cylindrical shape. With its scale, materiality, and visual allusions, Tower confronts both architecture and sculpture.

German artist Esther Kläs created a park installation during this past spring as well. Ferma is composed of two granite slabs that evoke weathered, timeworn architectural ruins and stone-laid pathways. Purposely hidden from view, the artwork is meant to be “discovered” within the Sculpture Park’s woods. The rawest, least relevant artwork in the exhibit, the piece is more archeological than architectural. The two elements appear to be ‘found’ excavated decorative objects rather than distinctive architectural ruins.

Constructed with stainless steel rods and tension wires, Kenneth Snelson’s Wiggins Fork was placed in the Sculpture Park in 2014. Perhaps the most engineered of the exhibit’s pieces, the sculpture gives off an impression of airiness and weightlessness, despite the strength of its design. Since the 1960s, Snelson has been employing the technical forces of compression and tension to create structures that are composed of both flexible and unyielding components. Without rigid walls, the compression and tension suggest form and volume.

Another piece in the exhibit (though not labeled as such) is the building where the visitor stops to pay admittance for his or her vehicle to enter the Museum and Sculpture Park. Sixty feet long, Wellington Reiter’s ?Visitor Station (installed in 2004) makes a geometrical structural gesture that is both pragmatic and appealing. It serves as a floating sculptural element as well as an entryway that houses a gatekeeper. This is literally a piece of architecture as functional sculpture.

Each of the sculptures in Architectural Allusions is based on rectilinear geometry. Even though they are all studies in abstract form, each exudes a quiet elegance that proffers an inner strength, an emotional muscularity. Rather than coldly wrought objects, these examples of conceptual and minimalist architecture are visual expressions of a very understandable human language.

Architectural Allusions is at the deCordova Museum’s Sculpture Park, Lincoln, MA, through May 1, 2016.

This article was originally published at Arts Fuse. It is republished by permission.