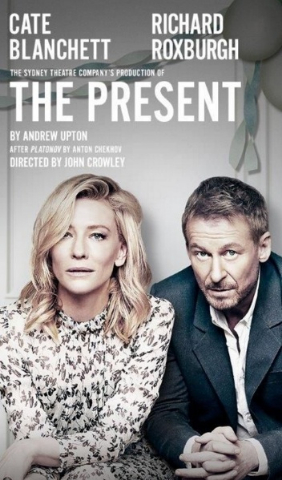 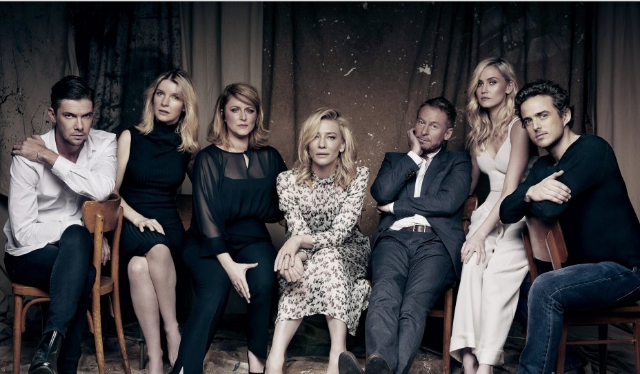 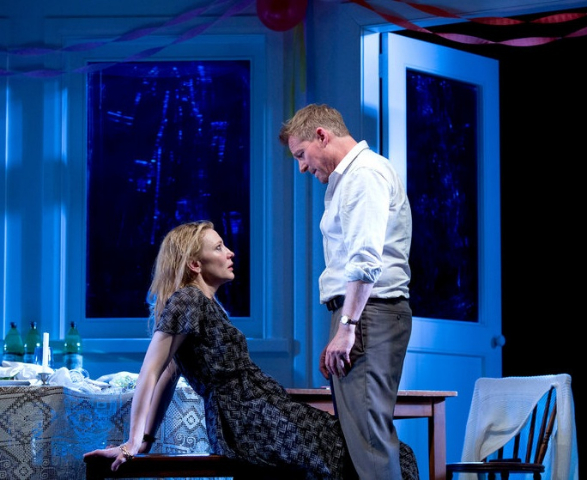 Blanchett and Roxburg. No question what this is about. 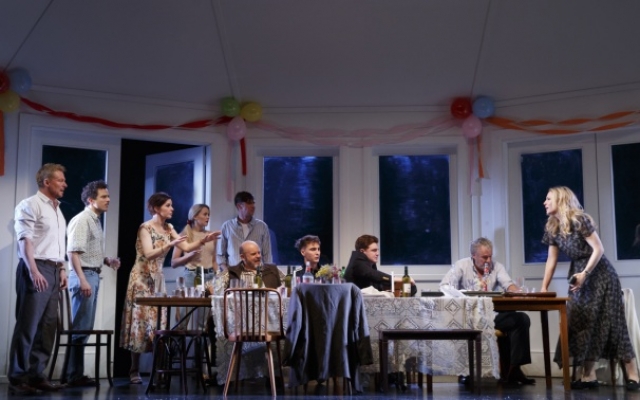 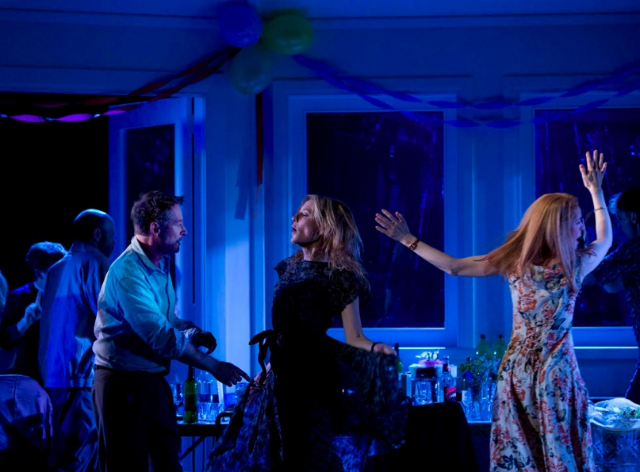 It is hard to imagine an actress as present as Cate Blanchett. Chekhov often dramatizes the present in which emotional and psychological truths are felt and portrayed.  In The Present, an update of Chekhov’s first known play, titled originally, A Play Without a Title in Four Acts, the feelings of sixteen main characters, now cut to thirteen, are abundantly felt.

Andrew Upton, a Chekhov expert, is responsible for this new take. The play was found in 1923 and first produced in Sweden in 1954.

Upton has chosen to leave the play’s setting in Russia, but now we are in Russia post-Glasnost and in the age of the oligarchs. The Present moves easily from the specificities of one time and place to new ones. The plots, subplots, sub-subplots, farce and pseudo tragedy, violence, jokes and complication upon complication, lofted in the original play, are trimmed and made more linear. Bits of talk are left hanging. Conversational logic is abandoned from time to time, a technique that would come to characterize the later work. Cause and effect can’t be joined. Seemingly disconnected fragments slide away from us into an unstable, yet intriguing dramatic space.

Chekhov is a poet of all our lives. His work not only survives but continues. At the age of 18, he begins to explore the relationship between being and expression. Reality is used to make a different kind of reality.

Yet we remain in the physical world. Anna, the Blanchett character, packs pistols and guns and shoots them off to punctuate, emphasize and forecast throughout the play.

The characters seldom talk past each other as they so often do in Chekhov. Blanchett’s often acts like a music hall character, entertaining the guests who have gathered for her 40th birthday party. She is also direct and curiously modern in her suggestion that the rogue Don Juan, Mikail, share his wares with all the women who want him. We meet four, including Anna.

Introductions take up the first act, as guests arrive for Anna’s party. Once introductions have been made, the play picks up pace for the remaining three acts.

How many men, like Mikail, who have been reduced to the role of small town school teacher, build up their smashed egos with sex?

Curiously it is not Anna’s marriage to a now-deceased wealthy general that seems like a contemporary trophy model on the arm of, well, a wealthy President-elect. When Anna says that she married the general for love, we believe her.

Mikail in the original play kept slipping in and out of focus. We are tight on Mikail in Upton's take and John Crowley's both specific and broad direction.

Mikail's recitation of amo, amas, amat in the original is nowhere to be heard. Actually it is not love that obsesses Mikail, but rather his diminishment and the release of his sex drive which dominates matters of the mind and Latin.

Richard Roxburgh, Blanchett’s frequent stage partner, is brilliant in the role of Mikail, turning a bright red as his blood pressure escalates with his private parts.  It is a physical matter, not one of the schoolteacher’s mind. He anchors us in this world, a self-described sufferer, a ferocious womanizer and a drunk. A triple threat.

Why are women attracted? He has the gift of gab. In the original, he was as lost as Hamlet. The Dane is of course detached from love as is Mikhail, remaining the vessel that invites love without understanding or reciprocating in any way.  Hamlet haunted Chekhov.

The sets are rooms in outline, which suggest timelessness. Many windows and doors provide the exits and entrances for the thirteen characters.

In the Third Act, Mikhail sits on a bench and the women in his life gallop by, if that’s a correct word for hoped for assignations and actual sex. The stage is filled with mist covering the white birches which one imagines in the background

The overall drama is fun. Yes fun. It works to play Chekhov for his humor. The actors are wonderful to watch.   The heart of the play is a bit flimsy, but Chekhov, even at his weakest, is a pleasure to see performed by such a superb group.