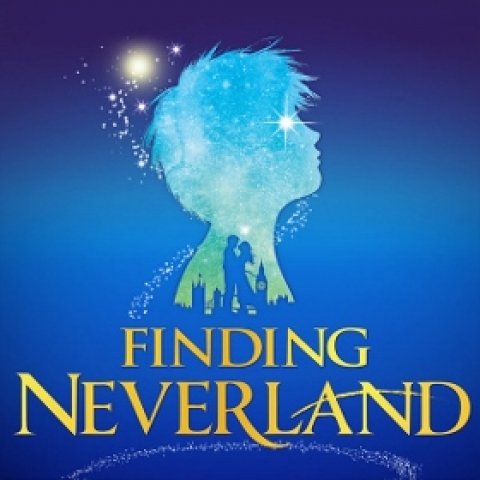 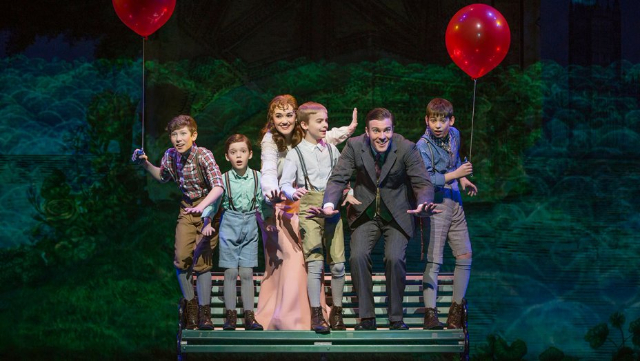 Your special fairy dust doesn’t transform Finding Neverland into the magical, soaring stage musical it could be.

With its eye candy, child characters, live dog and slapstick, young children may delight in the stage version of the 2004 movie and 1998 play. All three relate the true story of how Scottish writer/playwright J.M. Barrie (1860-1937) came to pen Peter Pan. But Finding Neverland provides little to no insight into an artist’s creative process. Although the musical is charming and touching to a point, there are few magical moments that result in jaws dropping and eyes widening. Add to that mostly forgettable pop anthems and pedestrian, sometimes repetitive lyrics. It’s no wonder this 2015 Broadway musical received zero Tony Award nominations. It closed on Broadway after 17 months. Critics, for the most part, panned it.

An equity national tour, which kicked off in October 2016, is still flying, but not soaring, across the country. It just finished a run at West Palm Beach’s Kravis Center for the Performing Arts.

One problem with the show is that Barrie “finds” Neverland too quickly and conveniently. There’s not enough sense that he’s searching.

At one point, Barrie, in early 19th century Kensington Gardens, London, happily strolls through the park. We'd never know he just endured a flop and is living through a strained marriage. Then, he sets eyes on the Llewelyn Davies boys and their mother, Sylvia. Suddenly, Barrie is jumping for joy and playing silly games with the lads. Shortly after, he’s basically written Peter Pan in his head.

Surely it wasn't just the boys who inspired Barrie to create Peter Pan. A deeper focus on the author’s past, his problematic marriage, or even some semblance of a struggle/effort in the creative process might have resulted in a richer, more fulfilling story.

Instead, musical book writer James Graham relies on an assured, but unoriginal method to win over audiences. The first thing we see, even before the curtain rises, is Tinker Bell’s shadow. Then, as the curtain rises, we notice a happily dancing Peter Pan. The knee-jerk reaction among Peter Pan fans, no doubt, is to clap loudly. It's kind of like the "entrance applause" a Hollywood star receives before uttering a word in a Broadway play.

After Peter Pan dances briefly and freely in Finding Neverland, we cut to Kensington Gardens. That's where Barrie and the Llewelyn Davies family met and frequently hung out.

Unlike the time I saw the musical on Broadway, Graham now frames Finding Neverland as a memory play. Barrie addresses us with the timeless, if overdone words “Once Upon a Time.” There was a time, he tells us, before Peter Pan existed. With that, Barrie delves right into his story. Curiously, the framing devise of memory isn’t used again until the very end.

The opening song is now the ingratiating “Welcome To London,” which London parkgoers sing. While the song and this opening setting might arrive at the story's heart more quickly, useful exposition is missing.

Barrie meets the children and the author suddenly experiences a “eureka” moment. He tears into pieces his play that has just flopped and dramatically tosses it into the air.

Shortly after, Barrie tells producer Charles Frohman he threw the torn-up pieces into the River Thames.

“Was the current strong?” a silly-sounding Frohman asks, suggesting Barrie could perhaps retrieve it.

Frohman (1856-1915) was a Jewish American theater producer responsible for the first stagings of Peter Pan, or the Boy Who Wouldn’t Grow Up.

In the touring production, John Davidson's portrayal of Frohman is curious.

Davidson’s Frohman, sporting a pony tail, is strangely jolly, flashy and flamboyant, even foolish. Any hint of exasperation at Barrie sounds more like a boy whining than a businessman insisting on results. Davidson, whose Frohman is too cartoonish to take seriously, doubles as a sneaky Captain Hook. But it's questionable whether the notorious pirate is needed in the show.

Karen Murphy doesn't fare well, either, as Sylvia’s mother, Mrs. Du Maurier. In the movie, Julie Christie played the older woman as a wary, protective mother. While she could be cold toward Barrie, Murphy invested the character with a mother’s love. We could at least sympathize with the woman’s concern that a strange, married, grown man wants to hang out with her young grandsons.

Murphy’s Mrs. Du Maurier comes across as an austere woman with superior airs and righteous indignation. She’s more caricature than flesh-and-blood human being, and it’s difficult to sympathize with her and her concerns.

Over-the-top acting is another production weakness. It’s one that hampers several performances -- even those prone to overacting, such as members of a hammy theatrical troupe.

Billy Harrigan Tighe, as Barrie, also overacts. Tighe, who lacks any semblance of a Scottish accent, seems too carefree and jolly. He is, after all, playing a man struggling through a tense marriage and under pressure to come up with a hit play. Tighe’s Barrie doesn't bring out his inner child as much as he simply acts childish. Tighe fares better during intimate scenes with Sylvia. During these moments, he and Lael Van Keuren, who plays Sylvia with a touching sensitivity and motherliness, enjoy a convincingly close chemistry. Tighe’s Barrie also projects a sincere concern for her and the boys, with whom he enjoys a robust, child-like chemistry. There’s never a suggestion that this author is some pervert.

One of the movie’s strengths is the pathos after Sylvia quickly grows gravely ill. You can’t help but sympathize with the already-fatherless boys about to lose their mother. The difference on film is Freddy Highmore’s powerfully emotional, convincing performance as Peter Pan’s main inspiration – little Peter Llewelyn Davies. Highmore’s affecting performance included seemingly authentic tears and a meltdown that no doubt shattered your heart.

The scenes following Sylvia’s descent into serious illness are less touching in this production. The child actors could use work on these dramatic scenes, although they’re fine while carefree and at play.

Speaking of “Play,” it’s the title to one of the songs in the musical. It’s sung, well, playfully by actors playing troupe members who will be among the first to appear in Peter Pan.

The song nicely captures the good times of The Edwardian era (c. 1901-1910). The musical is set during this period of prosperity, fashion and rich art, following the Victorian era. The aura of the Edwardian period is elegantly captured by costume designer Suttirat Anne Larlarb and scenic designer Scott Pask.

Cast members possess serviceable singing voices. They fare well with the less than stellar music by Gary Barlow and Eliot Kennedy. At times the lyrics, which don't deepen characterizations as well as they could, are hard to discern. That’s due to an at-times overpowering live orchestra.

In the end, Tink, even with all her fairy dust, isn't enough to transform Finding Neverland into a truly magical, soaring musical. The flying effects, for instance, are inconsistent. Why not use unnoticeable ropes throughout, instead of at times also having actors carry fellow cast members to simulate flight?

But with enough references to Peter Pan and some visually appealing projections, audiences may have all they need for a nostalgic, if not always enthralling, theatrical experience.

The equity national touring version of Finding Neverland, following its just-completed West Palm Beach run, will land in perhaps a city near you soon. For a list of tour stops, ticket prices and venues, visit https://findingneverlandthemusical.com