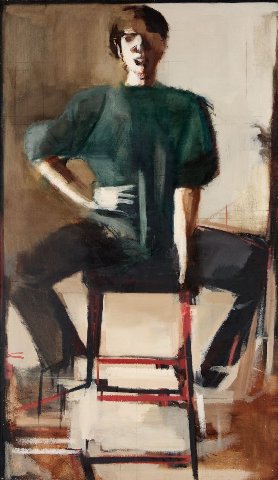 Gallery NAGA welcomes a new year with an exhibition of paintings by Peri Schwartz.

Peri Schwartz: Self Portraits & Studio Paintings opened to the public on Friday, January 8.  Gallery NAGA’s hours are Tuesday through Saturday from 11 to 5, at 65 Newbury Street, Boston. No appointment necessary.

The exhibition comprises a mix of both studio paintings as well as self portraits dating to the 80s and 90s.  The studio paintings reflect Schwartz’s long history of using her space as her subject matter.  In the studio, where she creates stage sets using books, bottles, and the architecture of the space, she is constantly arranging, re-arranging, adding, and subtracting objects in each painting.  Schwartz plays with the scale of her space using bottles and jars set against the backdrop of large blocks of color, which is then set against a window to the exterior of her studio in New Rochelle, NY.  Her palette is filled with both pastel and vibrant tones and often punctuated by sharp black.

The self portraits, never having been previously exhibited at Gallery NAGA, give context to Schwartz’s later studio paintings.  Self Portrait (1986) is the earliest painting in the exhibition.  In it, Schwartz’s torso is half turned but her gaze reaches across her shoulder to encounter the viewer.  In fact, all of Schwartz’s self portraits depict the figure gazing directly at the viewer.  Self Portrait in Pink Shirt (1988) portrays a confident artist seated on a stool, arms strong and propped in front of her, as if to challenge the viewer or perhaps herself.

Peri Schwartz’s work can be found in many public and museum collections including the British Museum, the Metropolitan Museum of Art, the Corcoran Gallery, the Harvard Art Museums, the Museum of Fine Arts Boston, the Bibliothèque Nationale de France, the Victoria & Albert Museum, and most recently the Philadelphia Museum of Art.