The Liar at Shakespeare & Company 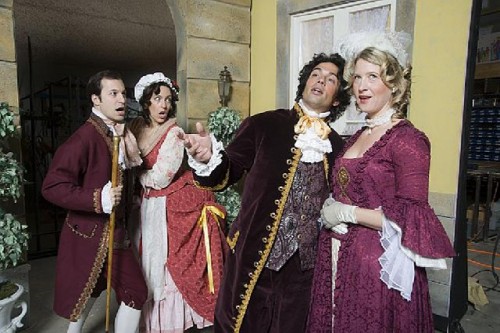 Another fine mess you’ve gotten us into.

Following last winter’s wildly successful run of Molière’s The Learned Ladies, a hilarious French farce will once again heat up the Elayne P. Bernstein Theatre in February and March at Shakespeare & Company. This year, a talented ensemble of Company artists will take on award-winning playwright David Ives’s (Venus in Fur, All in the Timing) razor sharp and rib-tickling adaptation of Pierre Corneille’s classic farce, The Liar, running from February 1 through March 24. The production is directed by founding member Kevin G. Coleman, the critically acclaimed director of The Memory of Water (2011) and The Winter’s Tale (2010), among many others.

“We did a reading of The Liar at Shakespeare & Company a few years ago in their play reading series and I’m looking forward to having it in their winter season," says Ives. "To be part of the rehearsal process, to be in the room in the early days of rehearsals working with the director and actors is something I very much enjoy. Hopefully, this will be the first of many more collaborations with the Company.”

Tickets are $15-$50, and S&Co. offers a wide range of discount options, including discounts for groups, students, senior citizens, military, teachers and our very popular 40% Berkshire Resident Discount. To view a complete schedule, receive a brochure, or inquire about discounts, please call the Box Office at (413) 637-3353 or visit www.Shakespeare.org. For customized group visits—which may include artist talkbacks, tours, and catered events—contact the Group Sales office at (413) 637-1199, ext. 132. The Bernstein Theatre is hearing aid assisted, heated, and wheelchair accessible. Back by popular demand, Shakespeare & Company’s annual Valentine’s Day Brunch will return on Sunday, February 10th. Visit www.Shakespeare.org for further information and to book brunch and show packages.

A tangled web of lies, misdirected advances, and the unmistakable confusion of love, The Liar has all of the ingredients of a perfect French farce. The truth will set most people free, but for Dorante (our disingenuous hero) a series of fibs may pave a convoluted road to happiness. The Liar was originally penned by the classic 17th Century playwright Pierre Corneille, in 1664. This translation by award-winning American playwright David Ives merges the iambic humor of classic verse with a contemporary twist.

The Liar reunites several of the stellar cast members from The Learned Ladies, including Dana Harrison (As You Like It), Alexandra Lincoln (The Venetian Twins), and Enrico Spada (King Lear). The leading role of Dorante will be embodied by Company favorite David Joseph, who was last seen in the summer’s sold-out run of The Tempest featuring Olympia Dukakis. The ensemble is completed by Jake Berger (Tartuffe the Imposter), Emily Rose Ehlinger (the New England Tour of Macbeth), Douglas Seldin (Tartuffe the Imposter), and newcomer Marcus Kearns.

“We were looking for a play to offer up in our February and March slot when winter has lost – maybe just a touch of – it’s romantic allure,” says director Kevin G. Coleman. “A time when spring seems too distant to hope for, or too improbably to be believed in. A time when our craving for intellectual rigor and emotional authenticity can only be satisfied by a French farce.

“Of the dozen or so plays I had read, this jumped out at me as a perfect bromide to the paucity of the Red Box and the uncertainties of Netflix. So, come join us, laugh at the misfortunes of others, and warm yourself at the fire of mistaken identity, rhyming couplets and characters high in moral fiber. Come for a rejuvenating dip in the shallow waters of David Ives’s translation and reinterpretation of a lost French farce. It’s really more than you might expect. It’s really very good. And it’s funny as hell.”

David Ives gained international fame by penning some of our most beloved evenings of one-act comedies, including All in the Timing and Time Flies. His most recent hit, Venus and Fur, garnered Nina Arianda a Tony Award for Best Leading Actress in a Play. All in the Timing celebrates its 20th Anniversary this January with a revival at Primary Stages in New York.

In the article The Whole Truth About The Liar, penned for the Shakespeare Theatre Company in Washington, D.C., Ives described his method of adaptation: “My version of the play is what I call a translaptation, i.e., a translation with a heavy dose of adaptation. For what I have realized in translating plays is that, in an odd way, the language of a play is of secondary concern… In the end, I did to The Liar what Corneille had done to his Spanish source: I ran with it. The truth, the whole truth and nothing but the truth, as refracted in a theatrical fun-house mirror.”

“I can confidently speak for the entire Company when I say how excited we are to welcome David Ives back to Lenox,” says Shakespeare & Company Artistic Director Tony Simotes. “David has left an indelible stamp on American theatre. For the cast and creative team to hear his first hand perspective on this artfully adapted work is invaluable. The beginning of a rehearsal process is always exhilarating, and to have the playwright here to share his insights adds an additional layer of excitement. I couldn’t think of a better way to wrap-up what has been the most successful season in Company history.”

KEVIN G. COLEMAN founding member (Director of The Liar; Director of Education) teaches text analysis, stage combat, clown and directing. Kevin has directed and acted in over three dozen plays with Shakespeare & Company and has has been a guest teacher or director at the American Stage Company, MIT, Harvard, UMass/Boston, L.S.U., SUNY/Albany, Stanford University, Shenandoah Shakespeare, Queensland University of Technology-Brisbane, Australia, Lincoln Center, the Folger Library in Washington, DC, the Stratford Festival in Ontario, and the Mercury Theatre in Colchester, UK. Kevin is the Project Director for the National Institute on Teaching Shakespeare, a program funded by the National Endowment for the Humanities where high school teachers from across the nation train with the master teachers of Shakespeare & Company and internationally renowned scholars in a month-long, intensive workshop. Shakespeare & Company’s Education Program has been recognized by the President’s Council on the Arts and Humanities, the MacArthur Foundation and the GE Foundation as a “Champion of Change” in Arts in Learning. It also received the Commonwealth Award, the highest honor awarded by the Massachusetts Cultural Council for contributions to the quality of life for Mass. residents in the arts, humanities and sciences. He was recently honored at the White House for the Education Program’s work with juvenile offenders which received the Coming Up Taller award. He has also received the Teaching Artist Award for Theatre from Massachusetts. Outside the Education Program, Kevin is the Theatre Director at the Austen Riggs Center where he has directed over 30 productions. Kevin holds degrees from St. Louis University and NYU.

DAVID IVES (Playwright of The Liar) David Ives is perhaps best known for his evening of one-act plays, All In The Timing (he has been included in the Best Short Plays series seven times), and for his drama Venus In Fur, which was nominated for a Tony Award for Best Play. His plays include New Jerusalem: The Interrogation of Baruch de Spinoza; The School for Lies (adapted from Molière’s The Misanthrope); Time Flies; and Is He Dead? (adapted from Mark Twain). He has also translated Feydeau’s A Flea In Her Ear and Yasmina Reza’s A Spanish Play. A former Guggenheim Fellow in playwriting and a graduate of The Yale School of Drama, he lives in New York City.