Life and Death of Marina Abramovic 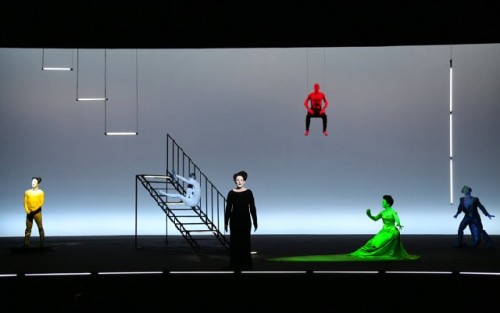 Marina Abramovic, Yugoslavian performance artist famous for her long durational works once said, “The only last thing an artist can control—his own funeral.” She in fact wrote her last will and testament in which she wants three coffins to be buried in three different countries, and her memorial ceremony to be a celebration of life and death combined.

Marina’s desire to rehearse her own funeral was not unexpected. However, it probably took some guts from Abramovic, whose performances deal with real time and space to give full control of re-envisioning her life to Robert Wilson, whose works are famously abstract. When about a month ago I asked Marina about her work with Mr. Wilson, she told me about her initial shock when Wilson announced she will be playing the role of her own mother…

Entering the 55,000-square-foot Drill Hall of the Park Avenue Armory, to view the production of “Life and Death of Marina Abramovic,” the audience first faced a massive construction that later revealed itself to be a specially installed stage. On each seat there was a newspaper announcing that “Artist Marina Abramovic dies at 67.” On stage there were three white angular coffins and three bodies each with masks all resembling Marina.

Where do you begin when making a piece of biographical theater? Robert Wilson certainly didn’t follow any chronological order in the life of his subject. He bombarded the audience with visually surreal, fragmentally structured scenes that were rather reminiscent of paintings. Meanwhile Willem Dafoe, the narrator, was chaotically pronouncing the dates and facts from Marina’s life, bursting, giggling, whispering, and rolling his sounds. Dafoe was like a mad scientist dissecting and examining all the emotional and painful stories that make up the artist Marina Abramovic. “The story of the washing machine,” “The ashtray,” “The story of the shoe polish,” “The story of the Russian roulette”—all the absurdist suffering and black Slavic humor becomes so tragic in this staging that you almost have to laugh.

Directed and designed by Robert Wilson, the whole piece was like a puzzle of abstract visual and sound elements with, of course, endless light cues. Traditional Serbian music by Svetlana Spajic was interwoven with the emotional performance of Antony from Antony and the Johnsons, who wrote several compositions for the production. Excerpts of original works of Amanda Koogan’s “Yellow” and “Medea” as well as Kira O’Reilley’s “Stair falling” were also organically incorporated into what turned out to be something of a quasi-opera. It seemed that each character, each element in the visionary staging of Robert Wilson, spoke its own personal story yet being a metaphor to the life of Abramovic. Marina’s acting, on the other hand, was awkward, but beautifully so. She seemed to be in constant need of “reality” in order to feel in sync with everything on stage, and yet she was the furthest from it. In the end, all the pieces came together.

In the closing scene, Wilson brought us back to the funeral. While Antony was singing “Volcano of snow”—an overall transcending experience—Marina Abramovic was elevated on the ropes suggesting ascension of the spirit…

What were you thinking about, Marina, levitating above us?