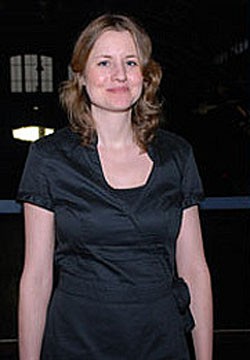 Paul C. Ha, Director of the MIT List Visual Arts Center announces the appointment of Henriette Huldisch as the List Center’s Curator. Ms. Huldisch, currently curator at the Hamburger Bahnhof, Museum for Contemporary Art in Berlin, will relocate to Cambridge with her husband, artist Andy Graydon, and their 6 year old son in June 2014.

“I am delighted that Henriette is joining the MIT List Visual Arts Center as our new curator,” said Ha. “She is recognized among our peers as an exceptional leader and has demonstrated  great ability to mentor staff, engage donors and be accessible to the public. I look forward to Henriette, alongside our current staff members, developing the artistic vision of the institution and helping realize support from donors.”

Since 2010 as curator at the Nationalgalerie at Hamburger Bahnhof, Henriette Huldisch organized major exhibitions focusing on art from the 1960s to the present, with a particular emphasis on time-based art and performative approaches. Exhibitions Huldisch curated include Harun Farocki (2014); Body Pressure: Sculpture since the 1960s (co curated with Lisa Marei Schmidt) (2013); and Anthony McCall: Five Minutes of Pure Sculpture (2012), the artist’s first solo exhibition in Germany.

In addition to her curatorial appointment at Hamburger Bahnhof, Huldisch has served since June 2010 as Visiting Curator at Cornerhouse, the respected visual arts center in Manchester, UK. As part of a team of four internationally based curators, she has been instrumental in redefining the space’s program in contemporary art and raising its profile. Her most recent exhibition projects at Cornerhouse include Playtime (2014); and Rosa Barba: Subject to Constant Change (2013).

From 2001-2008 Huldisch worked at the Whitney Museum of American Art in New York. In her position as Assistant Curator she co-curated the 2008 Whitney Biennial with Shamim Momin. She also curated or co-curated additional exhibitions such as Small: The Object in Film, Video, and Slide Installation (2004), which included works by John Baldessari, Sol LeWitt, and Michael Snow; and Full House: Views of the Whitney’s Collection at 75 (2006), the largest survey from the museum’s holdings to date spanning the early 1900s to the present in all media. She also produced a diverse range of large-scale art projects including off-site exhibitions, events, and performances.

As curator at the List, Huldisch will be part of the leadership team. Her role will be to oversee the exhibition and public programs at the museum, in conjunction with the Director. “I’m thrilled to be joining the MIT List Visual Arts Center, and to work with Paul and his team in continuing to expand the List’s reputation for presenting bold new voices and supporting artists at a decisive point in their careers,” said Huldisch.  “It will be a new and exciting experience for me to be part of a university museum, connecting with MIT’s spirit of inquiry and experimentation and reaching out to its large and diverse audiences.” Philip S. Khoury, Ford International Professor of History and Associate Provost, who oversees the arts at MIT, stated, “Henriette Huldisch brings an international perspective to our already well-respected and dynamic programming in contemporary art, and her tremendous experience and skill will be a real asset to the List and MIT.”

The MIT List Visual Arts Center has a history of innovative, provocative, and scholarly exhibitions and publications, and for supporting significant artists at an early stage of their careers, as well as for exhibiting important works by mid and late-career artists. The Center maintains and adds to a permanent collection of over 1,800 pieces that includes dozens of publicly sited sculptures and hundreds of paintings, prints, photographs, drawings, and sculptures located throughout campus buildings and offices. In addition the Center administers and maintains a student loan art collection that makes works of art available to MIT students for their dorms or apartments on a yearly basis.

The MIT List Visual Arts Center is located in the Wiesner Building, 20 Ames St near Kendall Square, Memorial Drive, and the Longfellow Bridge.