The Most Happy Fella 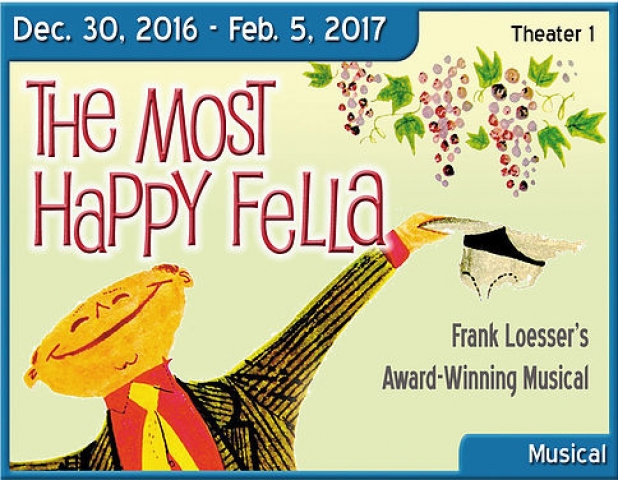 Stage Door Theatre’s breathtaking production of “The Most Happy Fella” offers some of the strongest singing you’ll hear on a stage. And you’ve got a little less than a month to hear the gorgeous voices belonging to members of a superb cast.

“The Most Happy Fella,” a touching, heart-warming, dramatic and comedic Tony-nominated musical from the mid-1950’s, requires great singing voices. Opera and musical theater companies have performed the show which, when performed in its entirety, comprises more than 40 songs, many in a style similar to opera. The musical numbers include sweeping ballads, intense dramatic arias and Broadway-style songs, requiring not just skilled singers but diverse performers.

Broward Stage Door is doing a version of the show from an early 1990s New York revival that featured duo-pianos. Credit must go to pianists David Nagy and Michael Ursua, who play robustly, don’t miss a note and don’t drown out the performers.

Andrew Rogow, who is directing Stage Door’s production, has trimmed the number of songs from more than 40 to about 30 and cut part of the story. He’s condensed the musical without removing the message at the heart of the tale: True love will ultimately prevail despite people’s differences.

In this case, the difference is age.

In 1920s San Francisco and Napa Valley, Calif., Amy (called “Rosabella” by her love, Tony Esposito), are separated in age by decades. Esposito, an Italian immigrant grape farmer, fears the younger woman, a San Francisco waitress, will turn him away because he’s much older. But Esposito’s love for the young woman is so strong that he risks his life—and his credibility -- in an effort to meet her.

Whether “The Most Happy Fella” falls more closely into the realm of musical theater or opera, the show has the necessary ingredients for success. A charming, touching love story with dramatic tension, recognizable characters who strongly desire something, as well as lush and varied music.

The songs and story are by the great Frank Loesser, whose diverse Broadway credits include “Guys and Dolls,” “How to Succeed in Business Without Really Trying” and “Where’s Charley?”

The music in “The Most Happy Fella” isn’t as memorable as the songs from “Guys and Dolls,” whose catchy, stylish music sticks in your mind once you’ve heard it. But “The Most Happy Fella’s diverse songs (some comic and playful, song heartfelt) succeed in heightening the emotions of its characters.

Plot wise, “The Most Happy Fella” brings to mind the work of Rodgers and Hammerstein: The more serious part of the story involves a central couple strongly in love. But their future together is threatened by a love triangle, hard feelings, a painful, shocking revelation and Esposito’s protective older sister. The subplot, which not only doesn’t detract from the main story,  but is seamlessly integrated, involves a secondary couple whose love affair is more comedic with less tension.

As Esposito, Kyle Yampiro boasts a robust, rich, voice that conveys all the character’s hope, charisma, tenderness and vulnerability. Yampiro, for the most part, nails a strong Italian accent, although he loses it sometimes in song.

Yampiro invests Esposito with the right amount of vivacity and modesty. The actor makes us feel Esposito’s desire to be accepted among the young crowd.

The musical, among other things, pits the desire to remain forever youthful, do what young people do and mingle with them against recognizing the limits placed on you when you’ve aged. For this romantic but injured man (a car accident figures heavily into the plot), his slow recovery serves as a reminder that he’s not young as young as he used to be. As though that’s not enough, his younger sister, Marie, who still acts maternal toward him, is there to further remind him. She's played with a mixture of loving protectiveness, wariness and a stern manner by a serious-faced Lisa Franklin, who wishes to keep her brother away from Rosabella.

As that young woman, Shay Weinberg has a soaring, gentle, expressive soprano. Weinberg radiates charm, sensitivity and a strong sense of being torn between Esposito and Joe, a younger man who works for the grape farmer. Rosabella initially mistakes Joe for Esposito, which sets in motion the story’s rising action. A love triangle develops between Rosabella, Esposito and Joe (a free-spirited, charming, youthful and restless Kyle David Pressley).

Rogow has made some wise directorial decisions. In the beginning, for example, Esposito passionately kisses Rosabella’s picture, leaving us no doubt how strongly and quickly the gentleman has fallen for her.

The director who deftly stages and paces the production, also finds the comedy in the piece, particularly in the case of the secondary couple: the perpetually-pleased Herman (a gentle, sincere Ellington Berg) and Rosabella’s colleague at her restaurant, Cleo (a commanding, sassy and wise-cracking Kimberly Abrams), who seems mildly irritated, in an amusing way, at how Herman is never irritated.

Under his direction and the cast’s strong, earnest performances, the production never crosses over into melodrama. Rogow and his entire crew have helped tell a sincere, touching love story between people who may be different culturally and age wise, but truly love each other.

This musical is from the 1950s, yet it feels particularly relevant today, when families are more heterogeneous than during the decade this musical was written.