The Marvelous Mrs. Maisel on Amazon 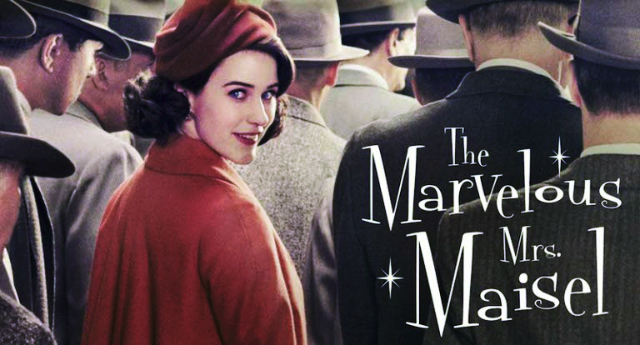 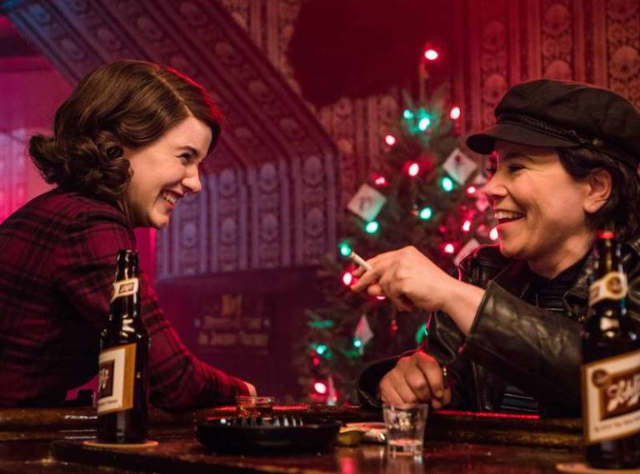 The comic and her manager.

It’s the late 1950s on the upper West side of Manhattan. Midge Maisel (Rachel Brosnahan) is a well-dressed, well-educated woman with a husband, two preschool children and a gorgeous apartment. Midge’s husband Joel (Michael Zegen) is a businessman and flailing standup comic. She goes with him to his late-night gigs and during the day, takes the tots for walks in Central Park, discussing Dr. Spock with her friend Imogen. But when Joel leaves Midge for his secretary, Midge transforms herself into an outspoken, sometimes profane, and bitingly funny standup comic, using her own life as raw material.

That’s the whole story right there. During every episode of the eight-episode season, Midge does a standup routine of some variety. True, she’s sometimes drunk or stoned. But to be fair, she didn’t know what would happen when she took her first hits on a joint in the alley outside the Village Vanguard with three musicians and comedian Lenny Bruce.

“The Marvelous Mrs. Maisel,” an Amazon Studios series, won two Golden Globes Sunday night—one for best TV comedy series and one for best actress in a comedy series for Brosnahan, who grew up in Highland Park. It’s a hilarious look at a life among the wealthy and the lovably wacky flavor of Greenwich Village before Bob Dylan arrived.

Midge’s sidekick and erstwhile manager is Susie (Alex Borstein), who works at the Gaslight Cafe (a basket club) in the Village, where Midge first takes the mic. Seeing an undiscovered talent, Susie takes Midge in hand and leads her on a tour of New York comedy clubs, seedy to splendid, to show her how the comedy world works.

In the 1950s, a performer could be arrested for using profanity or showing too much skin. (Which Midge does in the pilot.) Cops in New York and Chicago loitered around clubs, waiting for a performer to violate anti-obscenity laws. When Midge gets arrested, the cops cart her off to the station in a squad car with a comic named Lenny Bruce. (Bruce gets a competent portrayal by Canadian actor Luke Kirby, who plays Hamlet in the first season of “Slings & Arrows” and many other TV series and films. He gets the posture and attitude right.)

Midge’s parents—Tony Shalhoub and Marin Hinkle–live in the same building where Midge lives because Joel’s father owns their apartment. After the separation, both Midge and Joel end up living with their parents.

Midge’s struggle to overcome prejudice against female comics is patterned after the careers of pioneering comics like Phyllis Diller (of which more later), Joan Rivers and Totie Fields.

At the end, there’s a chance that Midge and Joel will get back together. I won’t tell you how that turns out. But episode 8 ends with a fistfight outside the Gaslight Café. Just like Inside Llewyn Davis ends.

You’ll love it for:

The Marvelous Mrs. Maisel is an Amazon Studios original series, available for streaming or watching on any device on Amazon Video (free if you’re a Prime subscriber). The series pilot premiered last March and the eight-episode season was released on November 29. The producers, Amy Sherman Palladino and Daniel Palladino, have contracted for two seasons.