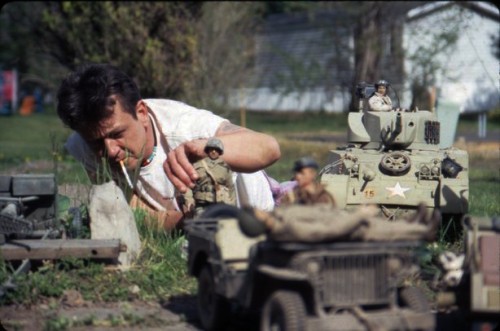 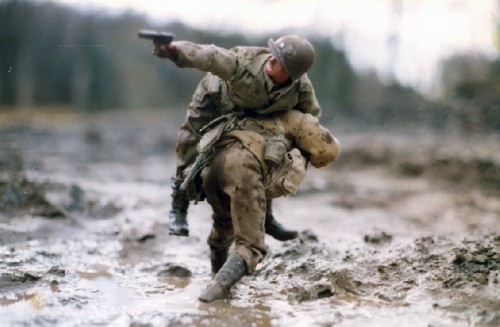 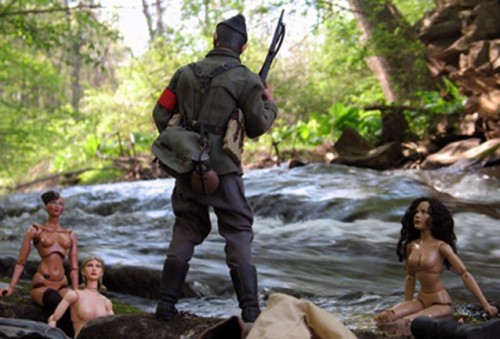 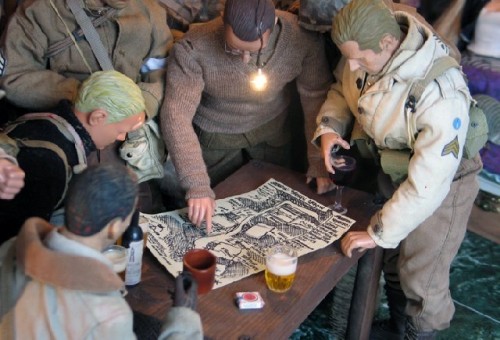 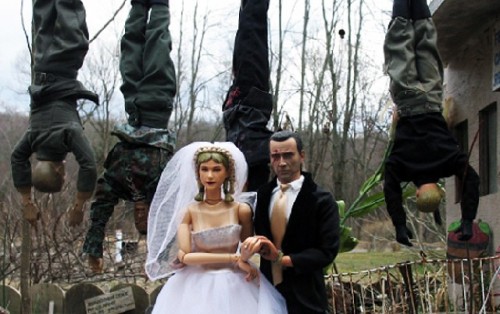 The marriage of his alter ego is staged in front of a gallows of his SS assailants.

In 2000 an alcoholic, Mark Hogancamp, apparently mentioned cross dressing. Five teenage patrons of the Kingston New York bar jumped him outside. The severe beating left him in a coma with brain damage and memory loss.

When benefits expired, well short of recovery, he was given minimal disability coverage. Moving in for a year with a roommate he struggled to relearn how to speak, walk, read and write.

A unique aspect of his memory loss is that he could no longer recall the taste of alcohol or the sensation of being drunk. While seemingly cured of alcoholism, alarmingly, he is a chain smoker.

Prior to the assault he was a talented artist, illustrator, and set designer. Because of hand shakes he no longer has the motor control for drawing.

But his artistic instinct has led to the outsider creation of a World War II, 1/6th scale, model Belgian town, Marwencol. It is populated with a collection of Barbie dolls, GI Joe, German, and French soldiers. Over time these items, as well as jeeps and tanks, have been acquired through a local hobby shop.

Remarkably, the dolls, which he alters and dresses to make them compellingly authentic, are used to create story lines that act out his real life relationships and trauma. Some of the conflict, depicted with gruesome detail, is gory and graphic. It allows him to confront and act out rage and a desire of revenge on his savage attackers. The real life thugs have morphed in his fantasy village as the SS. These he distinguishes from enlisted German soldiers who, in his narrative, drink at the same bar with American and French troops. They all enjoy staged “cat fights” between his sexy Barbies.

To make his jeeps and vehicles more authentic Hogancamp drags them along the highway during endless walks. Locals have become used to him camping about in high heels.

But we encounter this aspect of the story rather well along in the feature length, 83 minute film which was screened last night at Images Cinema in Williamstown. The project, directed by Jeff Malmberg, took five years to produce.

It reveals how he slowly came to the attention of a photographer, the publisher of an art magazine Esopus, the filmmaker, and the curators of the non profit gallery, White Columns, in New York’s Greenwich Village.

Using a point and shoot camera, with a broken light meter, Hogancamp created thousands of snapshots piled into cardboard boxes. If the exposures of the film he sent out for processing are off he simply reshoots the staged setup. Given the miniscule amount of money he receives through disability every spare penny goes to Marwencol and the life of his alter ego, a rugged, battle hardened, tortured, GI. Who eventually marries a gorgeous Barbie.

In real life Hogancamp was married. We see clips of the wedding video. And before the assault he had a girlfriend for a year. But while he is aware of these relationships he has no memory or emotional connection to them. When his real life crush on a blonde neighbor is gently rejected he kills off her Marwencol character. His alter ego acquires a new “girlfriend.”

The wedding is staged in front of a gallows of SS attackers hanging by their heels. They had beaten his alter ego before being captured by several knife and gun wielding Barbies. Their execution is justice rendered for Hogancamp's real life and fantasy assaults.

We learn that the White Columns show was well received. It included a selection of his photographs, a couple of the model buildings, and a single, life size blowup of an image of soldiers in a jeep. The scale is essential to understanding how Hogancamp sees and relates to the dolls and their elaborate narratives.

The exhibition received an appreciative review from the influential critic Jerry Saltz. The 2010 documentary film has won awards and been included in year end critic’s lists.

During the Q&A, with Tod Lippy, of the non profit magazine and space Esopus after the screening, it was revealed that Hogancamp has expressed concerns for Arizona Representative, Gabrielle Giffords. It is too soon to project just how she will recover from a bullet wound to the head. But it gave viewing this film an extended level of relevance and insight.

While Hogancamp never intended Marwencol as art the work is now of great interest to critics, collectors and curators. The question was asked about possibly exploiting the artist? Apparently, it has been a concern of those related to the project.

It was stated that the White Columns show, and another after that, might easily have “sold out” but raised an issue. If Hogancamp earns income he will loose his disability support. The legal ramifications are being explored of creating a trust in his name. There is also a loophole in which visitors to the website make direct donations to the hobby shop. This provides Hogancamp with expanded access to materials and dolls.

The question inevitably surfaced as to why WWII and a village in Belgium? Apparently, Hogancamp anticipates that question. His response was paraphrased as “WWII was a time when men respected women and treated them well. Also, it was an era when women liked to wear nylon stockings and high heels.” My goodness.