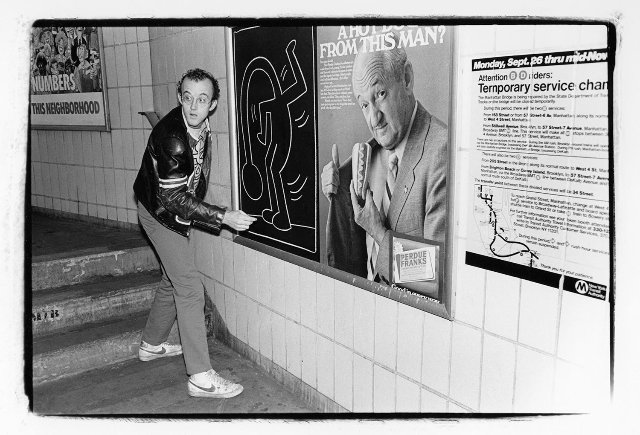 In the early 1980s, Keith Haring was a little-known artist from Reading, Pennsylvania, not yet the international art superstar and social activist he would soon become. During this time, Haring made thousands of unsanctioned chalk drawings in New York City subway stations. Most of them were promptly thrown away or papered over by subway authorities. Only a limited number survive to this day. Seventeen of these historic drawings will be exhibited publicly for the first time at the Brattleboro Museum & Art Center (BMAC) in the exhibition “Keith Haring: Subway Drawings,” on view February 18–April 16, 2023. The exhibition’s opening reception, free and open to the public, will take place at the museum on Saturday, February 18, at 5 p.m.

The drawings in the BMAC exhibition were saved from destruction by a Metropolitan Transit Authority (MTA) worker who carefully removed them and held them in safekeeping for decades. Eventually, art dealer and collector Alex Trimper acquired the drawings and agreed to lend them to BMAC along with a selection of other artworks by Haring.

“This is a real coup for BMAC,” said Director Danny Lichtenfeld. “We’re deeply grateful to Alex for allowing us to share these iconic artworks with our community.”

The subway drawings are one of many projects Haring executed in public spaces. In late 1980, Haring noticed blank advertising billboards covered with black matte paper in New York City subway stations. He purchased white chalk and began a daily routine of making spontaneous drawings in these blank spaces. The resulting drawings, which Haring made quickly to avoid getting caught by the MTA police, were crucial to the development of Haring’s recognizable, cartoon-like imagery and unique characters, such as the barking dog and the radiant baby.

Haring’s images had immediacy and impact. They also carried multiple meanings. Although Haring self-censored his subway drawings, leaving out explicit sexual and political imagery, the compositions still subtly responded to a wave of conservative politics. Their imagery includes references to gay rights and nuclear energy, among other pressing issues of the time.

Because of their visibility, the subway drawings launched Haring into the public spotlight. The performative aspect of making the drawings also attracted attention and drew an audience. Haring leaned into the public interest that the project brought him. He designed buttons illustrating the motifs in his images and gave away thousands to subway riders. A video of one of his arrests, taped by a friend, was featured on CBS News on a nationwide special. The public attention that came with the subway drawings and related activities helped launch Haring’s commercial art career.

The upcoming exhibition at BMAC offers a rare opportunity to see a selection of Haring’s subway drawings alongside a number of his iconic posters, buttons, stickers, and other ephemera. Even decades after their initial production and display, Haring’s works remain visually compelling and speak to social and political issues still relevant today.

Two events organized in conjunction with the exhibition will offer audiences the opportunity to learn more about Haring and his work. On Thursday, March 16, at 7 p.m., art historian Amy Raffel will discuss Haring’s subway drawings and artistic development in the early 1980s. On Thursday, March 23, at 7 p.m., Angelina Lippert, Chief Curator at the Poster House in New York, will give a talk at Next Stage Arts Project in Putney, Vermont, on how posters marry the worlds of art and commerce. For more information on these and other BMAC events, visit brattleboromuseum.org.