Philip Guston at the MFA 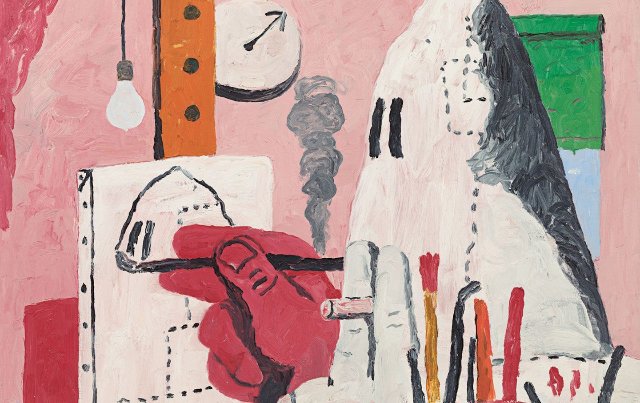 Since I saw the Philip Guston show last Fall at the MFA Boston, I have been hoping to write a review of his work. Should be something easy to write about but it isn’t.

In sum the stops along the way of his evolution are as follows: he starts out his career working realistically with a strong social consciousness finding its subject in the human suffering of the Great Depression. Then, addressing the same topic of social realism he integrates the various languages of Modernism: the flattening effect of Matisse, the activated line of Klee and the color atmosphere of Monet to arrive in the latter part of his life with a scathing and sardonic vision of the rot of the underbelly of modern consciousness visually borrowing from the language of cartoon pop culture. He even overcomes the last seduction of Abstract Expressionism, although someone thought it looked like, to his chagrin, abstract impressionism. This is the only ambiguous period where the Ab Ex appears to establish a clear break with Social Realism.

Summoning memories of my encounters with him personally and his work over the years, there are some questions that are hard to answer. What is the importance of Piero about whom he talked so vehemently at Yale/ Norfolk with the minimalist composer Morton Feldman. Piero deals with a space that is metaphysical in nature grounded in Christian eschatology. Did it influence his work and where?

There are the references in the late work to what would be considered by Catholics venial sins such as smoking but predominantly it is the sinister masks of the KKK that dominate the later work.

My last encounter with the Guston story and final push to inspire this review was yesterday on a Zoom lecture on his life and work sponsored by the Brooklyn Rail featuring two experts on his work: Kelly Baum, a curator at the Met in NY and Alison de Lima Greene a curator at the MFA Houston who mounted a Guston show. Alison thankfully clarified the canard concerning the delayed opening of the show as having nothing to do with the controversial nature of the show’s subject. It was all Covid related. How does one open a show to the masses when society is in lockdown

In the Zoom event I was surprised that Guston’s dialogue with the language of Modernism was only partially addressed. The easy path could have been to remain a social realist as many of his generation did, working in the volumetric style of much of Depression era art. The dynamic compression of space seen in Matisse and Klee he adapted to expand his visual language to its betterment. His use of splotches of color from Monet put him in the Ab Ex movement alongside of Rothko, De Kooning and Gorky, which is where I learned of his art.

I recall William Bailey discussing how the abstraction that was being formulated in the work of the Abstract Expressionists in the thirties burst out of the realm of private exploration to define the public notion of American art in the Fifties pushing social realism to the back burner.  That Guston was able to join up with a movement antithetical to where he was taking his early work, speaks volumes of his creative and inventive talents. This break with social realism and zig zag back has probably been explored  by Guston scholars.

He was seen to be such a successful practitioner of that abstract mode of painting that his move to cartoon-based imagery was seen as catastrophic by Hilton Kramer and others. In Charles Giuliano’s book on the history of the MFA, I read that curator Ken Moffett turned down a gift of a late Guston. He wanted the abstract work without a trace of social realism. Even the above mentioned curators did not bring up the pure visual play of that period of his work and in fact seemed to see some edgy indication of social conflict in the Monet inspired work.
Part of the Guston lore is that he found at Boston University, where he taught through the end of his life, a group of artists/professors, with similar ethnic/religious roots. It revived an identification with his Jewish roots. He had changed his name from Goldstein to Guston and was not a practicing Jew.

I recall a discussion with the artist Bernie Chaet, who grew up in the same neighborhood that produced the Boston Jewish Expressionist movement and whose career in Boston moved in parallel with several of the professors who taught at BU alongside of Guston.  Chaet said he, himself, was shunned by many of them for embracing the seductive color of Bonnard and Matisse in his work. At his home in New Haven, I saw examples of his early work that displayed Jewish religious iconography. So at one point Chaet did embrace his roots. He said that he was seen as an apostate. The artists who grew up in the Jewish neighborhoods of Boston looked to Beckmann, Dix and Grosz as worthy exemplars to portray the human drama of hypocrisy and exploitation that defined the 1930s.

Whereas the earlier Guston is looking out at the world where the social drama is taking place, there is a sense of Guston also being aware of his own corruption, physical and spiritual. He like the Klan is a wearer of masks. Does he hide behind a public persona? In fact, the use of masks appears in his earlier work. Is there a sense of guilt arriving out of his failings in his personal relationships. (I am being speculative here) In a tweet, that I came across, the artist/critic Walter Robinson felt the late painting were very personal and dealt with Guston’s guilt that in some way. Not on the same level but failings, nonetheless.

Walking through the Boston show I found my sensibility put off by the predominance of red. (the two curators on Zoom refer to recurring red walls in the early and later work) It was not the vibrant red of fresh blood that Goya represents in Saturn devouring his offspring but dried blood. In Goya the demonic devours something alive and fresh.  In Guston the demonic is reduced to the cartoon imagery as something desiccated. How does that affect an interpretation of the late work? Do contemporary notions of the banality of evil enter the dialogue as addressed in Arendt’s notion of that topic? There is no attempt to embody violence as in the work of Golub.  The Klan goes about their business of public self-promotion. We do not see the violence of say the murder of Emmet Till. The cartoon imagery provides a sort of barrier to experiencing direct violence

But enough criticism of what he didn’t do. Unlike so many of his peers his late work was a sort of apotheosis of self-awareness, personal and cultural. The move to the cartoon allows for the societal space in which we live to move to the fore. It disallows the sort of thing that realist painting allows such as the raw and the real of a moment in time. That so much of our identity comes from the political haunted Guston from early on in his career and in the end becomes codified in the way in which we are reduced to cartoon characters reified by the political. The political can impose itself on us whether we want it to or not.