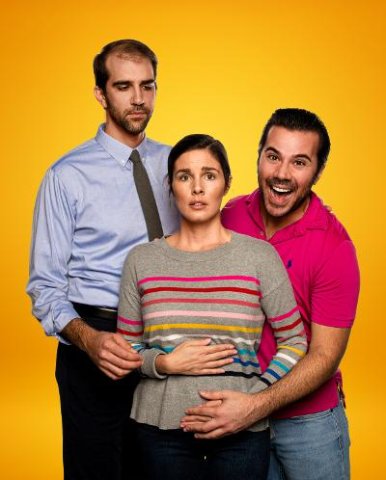 When Island City Stage (ICS) Artistic Director Andy Rogow discovered a new piece titled Compensation, “I knew right away this was a play I had to produce,” he says. “As many in the LGBT+ community seek to create families with children, I felt that this was an important story to tell.”

So, the professional, nonprofit ICS will tell the story starting in early February. Specifically, the Ft. Lauderdale-area theater company’s world premiere production will open on Feb. 5, with two weekends of live performance. Then, a week later, ICS will present Compensation virtually.

In the play, Tara is a lonely young woman. She drops out of college without her mother’s knowledge. And she becomes a surrogate for Gabriel and Elliot, a well-established gay couple.

“Suddenly, Tara finds herself carrying not only their future child, but a terrible secret as well,” reads a summary on the National New Play Network’s New Play Exchange. “Compensation is a dialogue about the complex systems that coerce women into outsourcing their bodies for income, the ethical implications of men purchasing access to those bodies, and the profound yearning for family that drives these people to entangle themselves in these systems in the first place.”

In fact, playwright Hannah Manikowski, an award-winning new play artist, originally intended for her piece to explore such systems. But eventually, “I really found that the heart of the piece was in the profound yearning for family that drives these people to entangle themselves in these systems in the first place,” the Georgia native says.

Patrons choosing to attend the production live rather than experience it virtually must undergo temperature checks before entering the theater. In addition, they must wear masks. For patron safety, Island City Stage, located at 2304 N. Dixie Hwy in Wilton Manors, is operating at 50 percent capacity.

Tickets for the live and video performances are available at islandcitystage.org. To reach the box office, call (954) 928-9800.