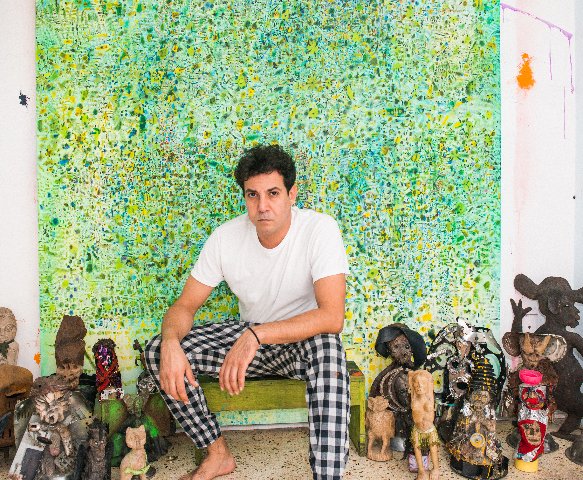 (Williamstown, Massachusetts)—A selection of large-format paintings by Tomm El-Saieh are on view at the Clark Art Institute in the latest in its series of year-long installations of contemporary art. Tomm El-Saieh: Imaginary City is being shown at the Clark from January 29, 2022 through January 2, 2023. The free exhibition is presented in public spaces in the Clark Center’s lower level and the Manton Research Center’s Reading Room.

“Tomm El-Saieh creates powerful, mesmerizing pictures.” said Olivier Meslay, Hardymon Director of the Clark. “It is exciting to have the opportunity to show the work of this promising young artist here at the Clark and we look forward to having many months to study and appreciate his complex compositions during the time they enliven our walls.”

El-Saieh (b. 1984, Port-au-Prince, Haiti; lives and works in Miami) creates paintings that dazzle with dense, all-over compositions of compact marks—achieved through painting, erasing, and abrading—often accompanied by atmospheric washes of bold color. His pictures test the limits of abstraction and perception with parts that resemble patterns, symbols, or even language, and a whole in which larger figures appear to coalesce, advance, or recede. Haitian vodou traditions inform his distinctive visual style, which also reflects influences from Abstract Expressionism and Surrealist automatism.

The exhibition title, Imaginary City, comes from one of the works in the show and refers to a cityscape theme of the same name, common in Haitian art. An “imaginary city” generally depicts a colorful urban landscape teeming with people—a representational stimulus for El-Saieh’s work, that likewise telegraphs a buzzing energy in its color palette and rhythmic compositions. For the artist, who has been unable to return to Port-au-Prince in recent years due to political instability there, his birthplace now exists mainly as such a place—a figure of memory and imagination and a site of joy and trauma, potential and uncertainty.

“Tomm El-Saieh uses abstraction to navigate his own complex, hybrid formation, in which questions of identity and belonging are nothing if not blurry,” said Robert Wiesenberger, the Clark’s associate curator of contemporary projects. “These dense, even dizzying paintings contain multitudes, and should reward viewers over repeated visits.”

El-Saieh’s paintings resemble informal urban plans and, similarly, develop intuitively without the use of preparatory studies or outlines. Two works featured in the exhibition, Vilaj Imajine? (2021) and Wanga Ne?ge?s (2021), are mosaic-like compositions that are both denser and more geometric than other earlier works included in the installation. The latter picture takes its name from a small hummingbird common in Haiti, whose colorful plumage and flickering motion find expression on El-Saieh’s canvas.

In Kafou (2021), El-Saieh uses little more than a tube of black paint and a dry brush on a primed canvas to create a gray monochrome painting, or grisaille. To modulate the flat, all-over composition of the large format (8 feet x 6 feet) painting, the artist varies line weights and patterns—erasing some sections and emphasizing others—thereby making them seem to advance or recede, like a “magic eye” optical illusion. The painting is named after a commune in Haiti, and comes from the word carrefour, which means crossroads or junction. Crossroads are often the site of offerings in the Haitian vodou tradition, and are considered liminal spaces, between the earthly and spiritual.

Like Kafou, Canape? Vert (2021) began as an all-over network of gray marks before El-Saieh added a vibrant veil of cyan and retraced different parts in purple, green, and black. This process accentuated what might resemble labyrinths, language, or veves, the religious symbols of Haitian vodou. The painting’s title refers to the district in Port-au-Prince where the artist was born and where his grandfather—a musician, big band leader, and gallerist who inspired El-Saieh’s interest in art and rhythmic compositional strategies—died. Speaking of the area, El-Saieh explains: “For me it is a location of death and regeneration. In the painting there is a snakelike form that I see as a sort of umbilical cord bridging two worlds.” Both Kafou and Canape? Vert are on view in the Manton Reading Room, while Vilaj Imajine? and Wanga Ne?ge?s are presented in the Clark Center’s lower level.

In conjunction with the Clark’s presentation, El-Saieh will also curate an exhibition of works by contemporary Haitian artists that will be presented at the Williams College Museum of Art in spring 2022.

This exhibition is organized by the Clark Art Institute and curated by Robert Wiesenberger, associate curator of contemporary projects.

ABOUT THE ARTIST
Tomm El-Saieh was born in Haiti and grew up in Miami and is of Haitian, Palestinian, and Israeli descent. He was the subject of a solo show at the Institute of Contemporary Art (ICA) Miami in 2018 and was included in the New Museum triennial in New York that same year. El-Saieh is a partner at the artist-run gallery CENTRAL FINE in Miami and long directed the El-Saieh Gallery in Port-au-Prince, a venue for contemporary Haitian artists that his grandfather established in the 1950s.