An Invitation to Listen 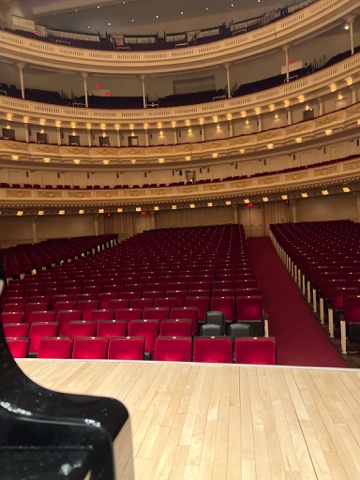 Igor Levit says hello to Carnegie Hall Photo by the pianist Posted on twitter the day of his concert Tonight Red heart
Long before over 50,000 new listeners discovered Igor Levit in his at home piano concerts during the height of the Covid pandemic, his teachers had awarded him the highest honors ever at school in Hanover.

Listening to him practice while playing doubles table tennis in the courtyard below his Berlin home, the wit, the humor and the deep thinking required of ping pong reflect his approach to the instant moment.

Riccardo Muti also sets the stage for performance with a very deliberate quiet.  Levit’s however extends to the music itself. He takes Wagner’s instruction at the start of the Introduction to Tristan and Isolde “slowly and languidly’and often begins whatever work he is performing in a slow and languid take.

Levit is inviting us to listen. The quiet of the first bars he performs is meditative. Think. Feel. Hear.  The two-note figure which is often repeated in the first movement on Beethoven’s Sonata 30, is treated with grace and buoyancy. Yet you need to lean in to hear it. The artist wants you to attend. Unobstructed listening.  Music emerging from silence and then returning to it.

In his popular twitter feed, he greeted us ‘hello’, accompanied by his photo of the empty Carnegie Hall that he would soon fill with the notes of Beethoven, Fred Hersch, Wagner and Liszt.

In the first half of the program, we journey through variations. The third movement of the Beethoven begins with a beautiful chorale-like succession of chords. In a highly unusual fashion, they are followed by four variations. Levit is fond of showing us the many facets of a melody as they are presented by composers. Variation suits his purpose.

A world premiere by American jazz pianist Fred Hersch led us through a series of variations on the folk tune Shenandoah.  Originally the story of the love of a fur trader for the daughter of an Indian chief, we are put on notice. Love is a big subject for Levit.

Like the aria that begins and ends Bach’s Goldberg Variations, Hersch in the hands of Levit journeys on the river’s classic melody, whose lyrics begin: “I long to hear you.”  We then do, in the turns on melodic themes that characterize jazz improvisation.  Improvisation, chromaticism and counterpoint fascinate throughout the evening.

The Tristan and Isolde prelude followed intermission.  Transcribing this music for the piano is a challenge. The instrument cannot sustain notes for as long as this music requires. Yet we got a hint of Levit’s interest in building a structure, a structure which yearns to resolve and does not.  The suffering and love themes whose variations thread through the opera are introduced here.

Levit without a pause then launched into Franz Liszt’s B Minor Sonata, a work revolutionary in its tine: it has one movement.  Within this, the traditional forms are indicated.  Liszt introduces at the start the three melodies which will propel the work.mLevit’s pyrotechnics are on full display. He seems to say: Don’t think because you haven‘t heard me crush the instrument that I can’t. Every exercise you’ve ever imagined is on display in scintillating form.

If you wondered for a moment why Liebestod did not follow the Tristan introduction, the artist returned in encore performing it. You sense that he wants to leave a love note to music in Carnegie.  He did.