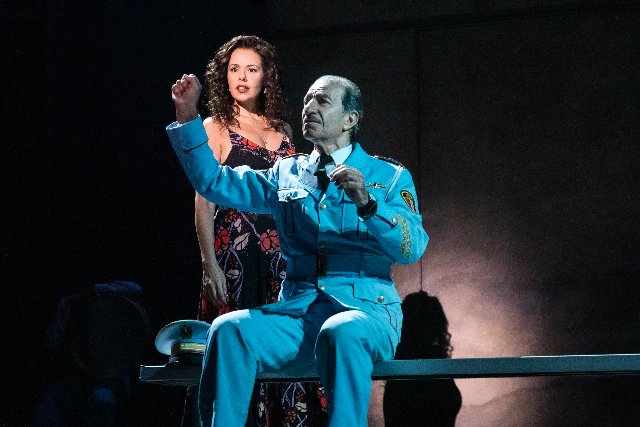 How do you set expectations for the touring production of a Broadway musical?  Case in point - what about “The Band’s Visit”?  Did it get great reviews?  Check.  Did it have a long run on Broadway?  Check.  Was it well recognized by the industry, as in one of the most decorated musicals in Broadway history with 11 Tony nominations and 10 wins?  Check.  Is most of its artistry transferrable to other stages, like its recognition for Best Musical, Best Book, Best Score, Best Director, Best Scenic Design, Best Lighting Design, and Best Sound Design?  Check.  So, what is needed to ensure success on the road is a fine cast and professional execution.  Check.  To conclude, be prepared for a crowd-pleasing escape to a far away world full of issues that are close to home.

The unlikely setting is a desolate town in the Negev Desert of Israel in 1996, aptly characterized by one of the play’s songs, “Welcome to Nowhere.”  The incident that triggers the action is that the Alexandria Ceremonial Police Orchestra has been invited to perform at an Arab Culture Center in Israel.  Arriving at the Tel Aviv bus station, the band’s expected reception party fails to show.

Tewfiq, the enterprising conductor of the band, decides that they will catch a bus to their final destination, but because of a minor communication problem, they end up in Bet Hatikva, not the intended Petah Tikva.  After realizing their misdirection, they learn that the next bus back to Tel Aviv is the following day.  Landing at the café of lively and lovely divorcée, Dina, she arranges overnight housing for the stranded musicians.  In the meantime, the evening fills with sweetness and sadness as various groups of hosts and visitors get to know one another.

As a classic cross-cultural collision, several clashing dimensions of difference could be exploited in the plot line - political (Israeli vs. Egyptian), religious (Jewish vs. Muslim), sociological (urban vs. rural), or even artistic (musicians vs. not), but the creators largely avoided the obvious and focused more on the shared challenges that people of all ilks face.  In that sense, the story is revealed on a small canvas of personal matters rather than a large canvas of great issues of the day.  But in wisely avoiding most clichés, one that might have resonated well with the audience is a real l’chaim moment.

Along with incidents of no great importance, arguments occur, mostly among the Israelis who have deeper history with one another.  Yet, the overall tone is sympathetic and graced with gentle humor that flows largely from waggish and well-timed delivery rather than from jokes.  Hosts and visitors explore backgrounds and find that they experience the same human emotions of longing, love, failure, and loss.  As an element of shared history with the visitors, Dina even waxes nostalgically in the song “Omar Sharif” about growing up with a love for Egyptian movies she watched on television.

Apart from serious pain that characters have suffered, some idiosyncratic failures are explored in great fun.  A young Israeli man waits at a sidewalk telephone night and day hoping to hear from the girlfriend who left him a month before, blocking others from using the phone.  Separately, the hosts find that the Egyptian clarinetist is working on a symphony and encourage him to perform for them.  Playing what he has written so far, it turns out that in 20 years his output is less than a minute of the overture.

Janet Dacal portrays Dina with a fine mix of verve and ennui – disappointed that fate has not swept her from her bleak surroundings, yet ready to take advantage when opportunity presents itself.  Sasson Gabay reprises his well-suited role as the more reserved Tewfiq, but from the original movie, not from the New York staging.

The biggest star is the music.  Lyrics in the sung songs are witty and divulging, and the accompanying music is pleasant throughout, with eclectic influences from American pop to klezmer to bossanova.  Some of the stylings are a little rough, which at first may suggest poor casting, but on further consideration, less than perfect renditions work well.  After all, the characters represented are not singers, they are working class.

What is most distinctive, however, is how the Arabic-themed instrumental music played by the several band members is integrated into the action.  There is enough of it that it remains exotic and leaves you wanting more.  The musicianship is phenomenal especially the violinist in his solos, and the musicians playing the Arabian instruments, the darbouka, a gourd-back lute, and the oud, a smallish hourglass-shaped, finger-flicked drum.

The production transports the creative elements of the Broadway show, and they work well.  Staging is spare and reflects the humble nature of the town.  Unlike some other musicals, the staging does not upstage the show.  A correctible weakness is that on opening night, the sound delivery was uneven, and many lines were not sufficiently audible.  But overall, “The Band’s Visit” is a rewarding experience and a welcomed diversion from Covid.

“The Band’s Visit,” with music and lyrics by David Yazbek and book by Itamar Moses adapted from the screenplay of the same title by Eran Kolirin, appears at Golden Gate Theatre, 1 Taylor Street, San Francisco, CA through February 6, 2022.