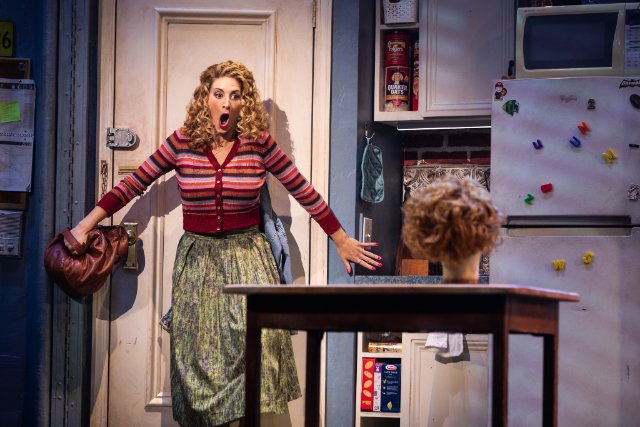 Photo by Evan Zimmerman Sandy Lester (Payton Reilly) is about to have an anxiety attack in Tootsie the stage musical. 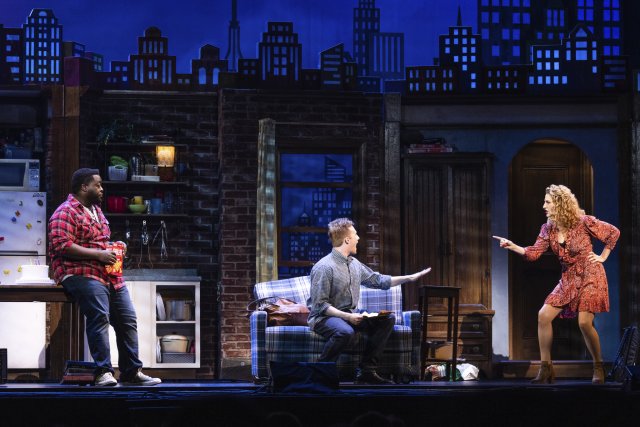 There is at least one time for celebration in Tootsie, the engaging and compelling, award-winning comic stage musical based on the 1982 hit film with the same title. Fittingly, during that moment, lead character Dorothy Michaels’ name is aglow in lights as she celebrates success.

But there is also a low moment. Specifically, a decision by Michaels threatens to ruin her career and life. In a symbolic move, the lights making her name shine go dark. And the letters comprising Michaels’ name drop from their upright position.

In the current non-equity, national touring production of Tootsie, which is playing in Ft. Lauderdale through Jan. 23, there are also high points and low points.

It would not be fair to call this production a complete failure from a performance standpoint. But it is not a total triumph either. Rather, it rests somewhere in the middle.

Of course, the aforementioned judgements are based on observations from the opening night performance on Tuesday at Ft. Lauderdale’s Broward Center for the Performing Arts. In particular, during the first act, it was hard to understand spoken or sung words. Also, the performances seemed tedious. For instance, Drew Becker, as Dorothy Michaels, lacked energy and gravitas. But there is no reason to leave during intermission; I noticed improvement during the second act.

Of course, Becker portrays not just Michaels, but Michael Dorsey. And as anyone who has seen Tootsie knows, they are the same person.

For background purposes, in the movie (set in the 1980s) and the stage musical (set during the present), Dorsey is a talented but argumentative actor in New York City. As a result, he has trouble getting along with others and obtaining parts. As a matter of fact, he has not worked in two years. To make ends meet, he works odd jobs while auditioning for roles.

While Dorsey helps his girlfriend, Sandy Lester, try out for a role, he figures he could audition for and land that part dressed as a woman. So, he assumes the name Dorothy Michaels and, clad in women’s clothing and speaking like a female, auditions for the musical Juliet’s Curse. It is the show-within-the-show, a sequel to Romeo & Juliet. However, by pretending to be Michaels, he is deceiving and hurting people, particularly Lester. Meanwhile, complications arise and Tootsie becomes a farce-like comedy.

But at its core, Tootsie carries serious-minded messages. They include the importance of treating women with respect and as equals. In fact, the fictional character of Ron Carlisle, the director of Juliet’s Curse, calls Michaels “Tootsie,” among other disrespectful names. And he treats Juliet’s Curse actor Julie Nichols even worse. In addition, Dorsey figuratively stabs Lester in the back by going behind her back and, as Michaels, winning the role that he was trying to help Lester obtain in the first place. Perhaps, then, Tootsie attempts to discourage disrespect by displaying it and contrasting it with Michaels’ pleasing, inspiring, and ingratiating behavior.

Indeed, Tootsie is female-empowering, particularly the Tony-nominated 2019 Broadway stage musical. Unlike in the Dustin Hoffman and Jessica Lange-starring movie, Michaels, a strong female character, plays a major role in improving the show-within-the-show, Juliet’s Curse (later changed to Juliet’s Nurse as an improvement). Further, Michaels inspires her castmates to do their best.

“Dorothy, you have turned this show into a joyous anthem for all women,” a character in the musical opines.

And in the end, because they knew her, they have been changed for good, to borrow a line from Wicked.

Speaking of other musicals, the stage adaptation is an irresistible celebration of live theater. It includes references to musicals you have likely seen. At one point during the live show, it suggests that Michaels is triumphing not just in Juliet’s Nurse, but in shows such as Gypsy (“Everything’s Coming Up Dorothy,” an illuminated poster screams), Cabaret (“Willkommen Dorothy”) and The Sound of Music (“Broadway is alive with the Sound of Dorothy.”)

With Tootsie’s adaptation into a musical theater piece, it made sense to change the show-within-the-show to a musical. And while he was at it, librettist Robert Horn celebrated theater as an art form. This allows aficionados to enjoy the show, even if they’re unfamiliar with the film.

The stage adaptation, Tony-nominated for “Best Musical” and victorious in other categories, improves on the film in other ways. For instance, Horn’s humorous and engaging book and David Yazbek’s witty, clever lyrics add depth to the characters. Also, Yazbeck’s score, comprising songs ranging from pop to Broadway brass, allows the characters to more fully express their feelings and thoughts.

Take, for example, the propulsive “Whaddya Do.” The argumentative, stubborn, yet indomitable Michael Dorsey sings the number almost at the show’s beginning. The melody possesses a marching, hard-charging beat. And this reinforces the fierce determination Dorsey possesses to succeed, despite casting directors and others turning him down. In addition, the clever lyrics, also by Yazbek, suggest defiance.

No doubt, the relationship between Michaels and Nichols was touching in the film. And Lange, who won an Oscar for her portrayal, brought an emotional honesty to her role. So did Hoffman. Still, one senses a richer relationship between Michaels and Nichols in the live adaptation. That is largely due to the number “Who Are You.” Its bright melody carries an air of mystery. Through the song, one character seeks to learn more about the other.

The score also includes a patter-like song. It suggests how fast Lester’s head must be spinning as she comes apart emotionally. Indeed, Lester, Dorsey’s girlfriend, is emotionally-fragile. She lets the tiniest things overwhelm her.

While much of the cast fares better in the second act than the first, there are weaknesses throughout. For instance, Adam Du Plessis overreacts as Carlisle to the point that the narcissistic, uptight character comes across as a caricature. And Becker never quite establishes gravitas as Michaels. Still, he imbues her with a touching modesty.

Payton Reilly’s Sandy Lester is a panicking mess. And the performer sings the rapid-paced, patter-like song, “What’s Gonna Happen” with impressive clarity and without missing a beat.

Lukas James Miller is a riot as the unorthodox Max Van Horn. The actor plays him with a convincing rebellious streak and an unabashed loudness, but also a touching sincerity at the end.

Jared David Michael Grant infuses Dorsey’s friend and roommate, Jeff Slater, with wisecracking sarcasm. In particular, Grant knows how to use silence to great comic effect, especially at the top of act two.

Generally, the performers possess serviceable singing voices. That is, when the vibrant live orchestra is not drowning them out. Either that, or Brian Ronan’s sound design needs work.

Christine Peters’ detailed scenic design allows set pieces to seamlessly roll on and off stage without disrupting the action.

Donald Holder’s mood-enhancing lighting and William Ivey Long’s character-defining costumes are also production strengths. Meanwhile, director Dave Solomon ensures that the actors sincerely play their roles. As a result, the cast earns laughs rather than begs for them.

Tootsie tickles the funny bone. And it presents us with an inspiring female leader and agent for positive change. Surely, we can use some of those these days.

This national touring production of Tootsie continues performances through Sunday, Jan. 23 at the Broward Center for the Performing Arts, 201 SW 5th St. in Ft. Lauderdale. For showtimes and ticket information, go to https://fortlauderdale.broadway.com/shows/tootsie. For information about future tour stops, go to https://tootsiemusical.com/tour.