Poppea is Crowned in Germany

Delightful Opera as Monteverdi is Staged 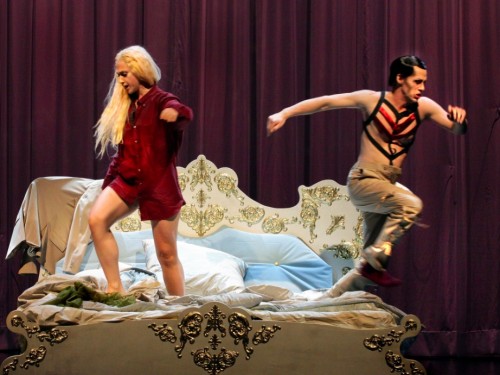 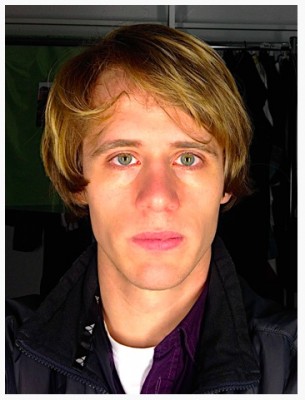 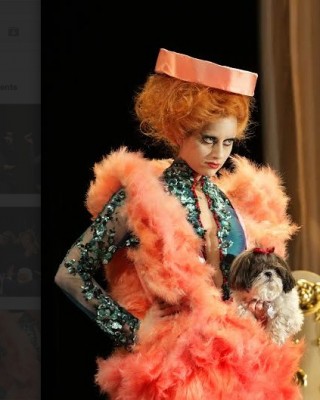 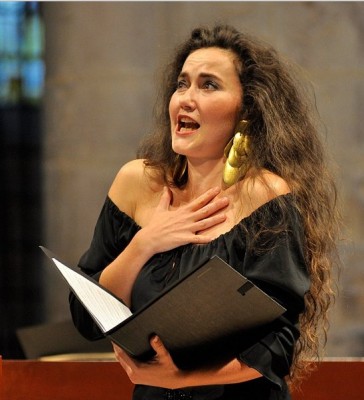 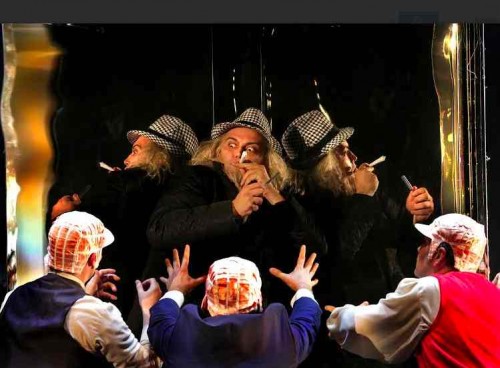 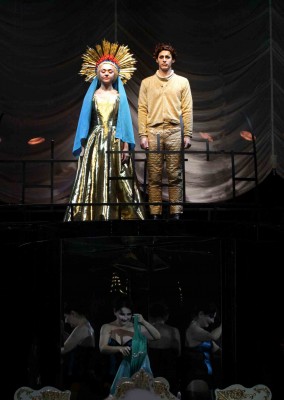 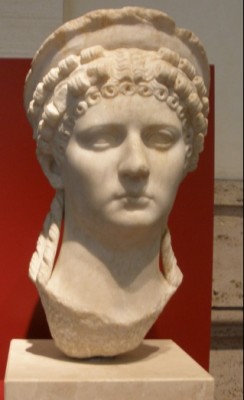 In the years before opera was officially declared an art form Claudio Monteverdi wrote Coronation of Poppea,   Sex, violence, treachery, betrayal and the triumph of a wicked woman are all the meat of 1st century Rome and perfect material for the new musical form. Shakespeare makes this brew work. Monteverdi and his librettist do too.

In the backstory, Nero, was educated by the Stoic, and perhaps cynic Seneca, who probably helped clear Nero’s way to power by arranging the murder of his mother and then bumping off his step brother who also had a claim to the throne.

We hit the story with Fortune and Virtua fluttering behind a scrim. These turn out not to be prime subjects compared to a sweet young Amore descending in her swing and singing delicately that it’s love that makes the world go around. Anyway it makes 1st century Rome titubate.

Amma-Maria Kalenidis unleashes her powers in the preferred battleground, an imperial bed, larger than a King, where she entices the Emperor and launches the plot to become his wife although he already has one.

Johannes Strauß, a tenor, sings the role often taken by counter-tenors. The edge and volume of his voice made Nero a big conquest for the vixen.

May creates Octavia as a camp, over-the-top wife who can’t quite get it together to survive. Danielle Rohr is a lusty mezzo with Raggedy-Ann movements sufficiently contained to remain on stage instead of floating off. She is around long enough to be killed too.

Seneca is rewarded for his loyalty and cunning when Poppea senses that his elimination will clear her path to power. Aleksander Stefanoski practically chokes on a cigar and pleads his case as the rhetorician.  Nero’s request that he kill himself is difficult to execute: slashing of wrists and behind the knees does not work. Reports say that Seneca was trying to compose a speech when he dies, mounting the mini-coliseum, cleverly and effectively suggested by revolving mirrors on the top of magisterial steps.

Gabriela Zamfirescuis, Arnalta, the main confidant of Poppea, is not averse to using the bed as the trampoline Nero and Poppea have inaugurated. Hers is a lush contralto, in full control of the dynamics which serve her apt dramatic interpretations.

The cast throughout is invested in the beautiful music and the antic goings on, where death just seems part of the game.  Director May is responsible. He also performed because the scheduled singer was ill.  May was convincing in his pantomime of Ortho.  Of special note was the singer who performed Ortho from the pit. Tenor Cornelius Lewenberg has been heard in churches in Baden Baden and Heidelberg, but we were treated to his extraordinarily even and yet shaped voice struggling with his loss of Poppea.

How do smaller houses solve budget issues? Imaginatively in Pforzheim. Set and  costumes were marvelously conceived by David Gonter.  The curtain which at first appears to be a rich taffeta, drawn back with ropes, decorated with ribbons and bows is painted on a moveable backdrop. Regal is presented with non-imperial efficiency. The costumes, when they are worn, are delightful. Arnalta looks a bit like a nun in stark black and white, in contrast to the brilliant orange feathers of Octavia. When she ascends with her mistress at the opera’s end, she strips and dresses as the lady-in-waiting of the Empress. This strip is a fun and amusing touch.

The Badische Philharmonie Pforzheim, conducted by Mino Marani,  deserves a special call out. The guitar adds charm to the already pleasing score. But the cembalo, played by Tobias Leppert,  held the show together with a brisk, bravura beat.

Poppea is an opera that is being performed more often and deserves to be. It offers many roles to singers and provides a rich and entertaining palette for the audience. Monteverdi is a big success in Germany, rising over its scheming title character, but very much a part of her.