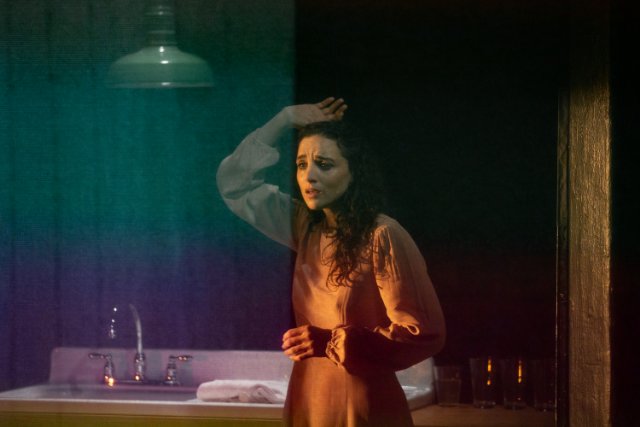 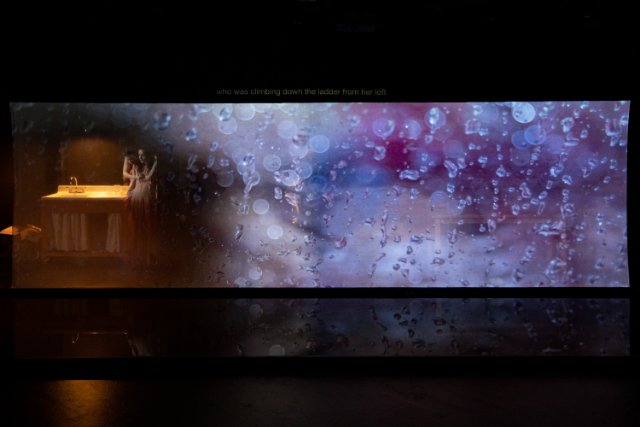 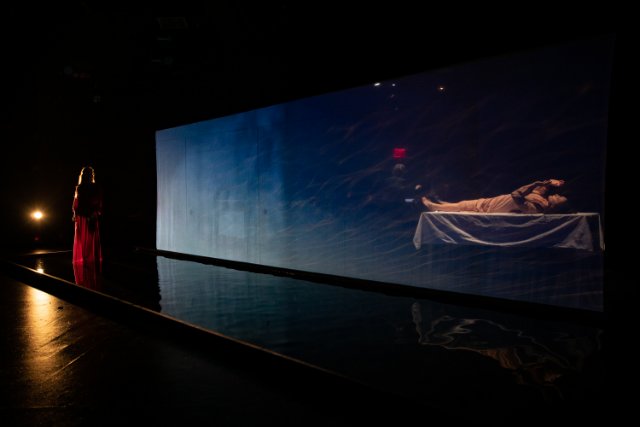 Three hundred fifty gallons of water sit on the front of the stage.  A transparent curtain contains moving projections. In a second curtain, a square transparent  section.  A backside view of the terrific conductor Mila Henry sits in the center, intriguing with music and gesture throughout Magdalene.

Music composed by thirteen women is performed by a string quartet joined by a harp.  The Desdemona Ensemble and Sonia Bize create musical magic under the direction of Henry.

Mary Magdalene is the subject of many paintings. She was with Christ when he died on the cross.  Some suppose that she was his mistress.  The Howe poem brings her issues up to date and suggestively poses answers about who we are as women.

Perhaps because all the music is played by a small band, it has similarly of tone as well as spirit.   This helps integrate a work of many musicians.

Birrittella commands the stage as she sings a tour de force extended aria.  Daub dancing gives us the colors of sex.  A humorous take on the penis sticks out in the show, but provides relief from its intensity.

The grand images which float by on the curtain and often spill over the theater are encompassing too.  Lighting adds dramatic emphasis.

This is a tone poem, which the librettos of many poets tend to be. The dramatic arcs of Alexander Pushkin's Eugene Onegin  and the often adapted Torquato Tasso are rarely seen in poets'  works made into librettos.  This also flattens our experience even when words are as rich as Howe's.  Yet the arresting voice of Birrittella and the seductive dance of Daub hold us in their thrall.