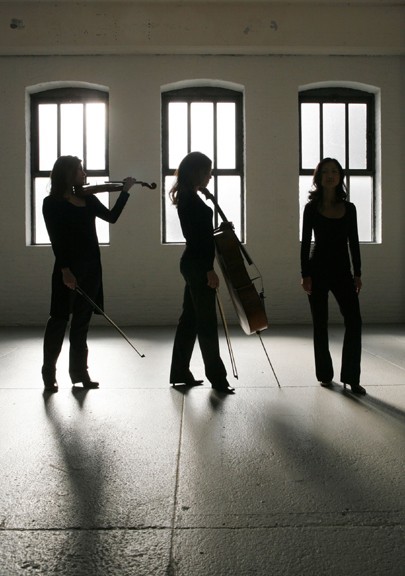 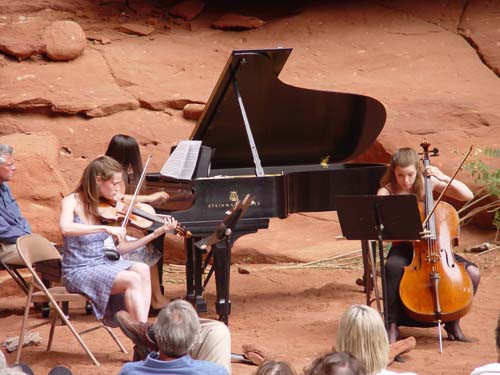 Claremont Trio pianist Donna Kwong said the Claremont Trio was “so excited about the music being written in our country and our time."

Widely regarded as the premiere piano trio of their generation

Widely regarded as the premiere piano trio of their generation, the Claremont Trio opened with Leon Kirchner's self-described powerhouse Trio No. 2 (1993) based on a cello concerto written for Yo Yo Ma, who attended. Later in the evening, cellist Julia Bruskin played Trio No. 1 (1954) with a rich, emotional palette supported by pianist Donna Kwong's bright tones and Emily Bruskin's violin. Both compositions are featured on their new CD "American Trios" released December 2008 in honor of Kirchner's 90th birthday. The disc includes Mason Bates' "String Band" written for the them in 2002, and Paul Schoenfield's "CafÃ© Music" and Ellen Zwilich's "Trio." Pianist Donna Kwong said, "The Claremont Trio was so excited about the music being written in our country and our time. We wanted to record a few of our favorite pieces to introduce more people to this great music. All of the composers featured on the album are no strangers to our Trio".

In Leon Kirchner's opening comments, he spoke of wonder at the smallest particles and his reaction to humanity's limits at the edge of a vast cosmos moving before us. Once Arnold Schoenberg's student, modern music Kirchner said, often excluded the fleeting and human gestalt, the multiple and complex mysteries of art. Artists have very few gifts, he said, but some could turn straw into gold. Kirchner was the Walter Bigelow Rosen Professor of Music at Harvard University from 1961 to 1991. He was awarded the Pulitzer Prize for his "Third String Quartet."

Three other performances carried the evening's mood. A playful "Flutings for Paula" (1973) was written for Paula Robinson. Her silken flute meandered through Ayano Kataoka's astonishing and delicate chromatic percussion. Explosive and terse, Corey Cerovsek's violin was reigned in by Jeremy Denk's piano in Kirchner's Duo No 2 (2001). The final evening performance, Sonata Concertante, ended like rolling thunder.

The Claremont Trio, based in New York, will celebrate their 10th anniversary season by returning to Carnegie Hall and Washington D.C.s Kennedy Center. There, they will present world premiere performances of works by Nico Muhly and one written for them by Howard Frazin. The group will conduct master classes and educational outreach programs this season in ten states. The trio will perform Mason Bates new work, "Red River" (2007) for piano trio, clarinet and electronics. They have also performed at Lincoln Center and recently, as part of a cultural exchange in Bosnia, Serbia and Slovenia co-sponsored by the U.S. State Department and Carnegie Hall.