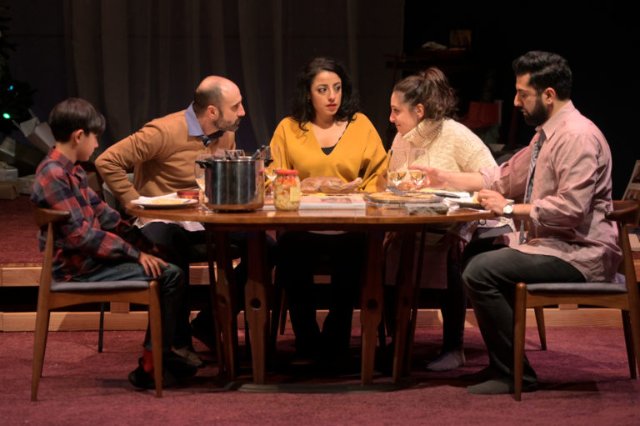 As a “nation of immigrants,” the United States is blessed with a society rich in various cultures and people. Yet, many Americans who seem to think they have special privilege because of bloodline or longevity treat many minorities with discrimination, exclusion, and stereotyping. The life of being cultural in-between often carries the additional stress and dysfunction of conflict coming from multiple sources.

Noura constitutes playwright Heather Raffo’s admirable contribution to the confrontation between assimilation and tradition faced by foreign born in American life. The title character and her husband immigrated to the U.S. eight years before the time of the play. They represent a small minority within a small minority – Christian Iraqis. Noura is middle-aged. An architect in her homeland, she has not practiced since immigrating. Husband Tareq was a surgeon in Iraq who had to work several years at Subway in the U.S. before passing exams to become a licensed physician.

The action takes place Christmas time in the living area of the couple’s apartment in New York. They are joined by Rafa’a, a male Muslim friend of Noura’s from earliest childhood in Mosul, who always spends Christmas with the couple, and Yazen, the couple’s son. The final character is Maryam, a recent refugee raised in an orphanage in Mosul.  Financially supported and sponsored for immigration by Noura and Tareq, she is meeting them for the first time.

The nature of the cast of characters is telling. Conflicts abound between these Arabs and their adopted community, including the assumption by many that because they are Arabic, that Noura and Tareq are Muslim, which creates immediate chill. The further assumption by many Americans is that these Arabs, or Muslims, or whatever they are, have a world view which threatens that of mainstream American society.

Though cross-cultural clashes with American ways are cited, the vivid tension in the play derives from the interaction of the characters onstage. Religious and social differences in Iraqi society, including the notion of self-identification and group association loom large. Critically, Noura raises the question of whether Iraqi Christians even belong to Iraqi society, given their decimation by Muslim countrymen. Further, do they belong to the greater Arab society given that ISIS has ravaged her country and particularly those of her religion?

Maryam’s arrival and departure, punctuated by Americanized attitudes and behaviors, triggers an immediate firestorm in a previously placid environment of generally accepting people. The playwright has crafted Noura, Tareq, and Rafa’a as adapted to American practices in many respects, but each discloses an unanticipated traditional side in a different way. Each has difficulty fully coming to grips with culture clashes and with the loss of a way of life and a place that they love. But as Rafa’a reminds Noura, the Mosul she loves no longer exists, and she must forget what went before.

Denouements arise in rapid succession near the conclusion, as the three main characters expose secrets that each has held for decades. Each disclosure carries profound significance and dramatic impact, yet in reality……one secret would have been hard to conceal; another would have been nearly impossible not to reveal; and the third should have been realized all along.

At the interpersonal level, Raffo’s central message concerns the power of silence, as evidenced by these secrets. Individuals often maintain silence to avoid confrontation or embarrassment. But the obverse effects are that, lacking exposure, the bearer of the secret suffers in silence. More importantly, the possibility of redemption and forgiveness are precluded.

The inclusion of cultural, social, and personal clashes at so many levels constitutes Noura’s greatest strength, along with the representation of multidimensional characters replete with internal contradictions that exist in people in the real world. The playwright introduces us to a population segment that may be foreign to most viewers, yet their concerns and conflicts are universal. One weakness is the credibility of maintaining these secrets for decades, but they are nonetheless essential to filling out the personalities of the characters and giving weight to proceedings.

Marin Theatre’s production is handsome. Heading the cast, Denmo Ibrahim’s magnetic charisma as Noura draws the audience into her complex character. She excels at eliciting laughs in the light moments and sympathy in the distressing ones. One unfortunate factor is that as a result of where the actors face, some dialog is not audible throughout the house. Also, simultaneous dialog is often used. Although the intent is to create a stronger sense of reality, that device also impairs the ability to get the speakers’ meanings. Especially because of the newness of the environment to the audience, these losses may impact understanding.

Nonetheless, the play brims with insights and issues. Not by accident, the very name of the title character opens a window into another dimension of the play by connecting with Ibsen’s A Doll’s House. Even detractors will be stimulated by discussing the play’s many interesting aspects on the way home.

Noura is written by Heather Raffo and produced by Marin Theatre Company in association with Golden Thread Productions and plays at the stage of Marin Theatre, 397 Miller Ave., Mill Valley, CA through February 2, 2020.