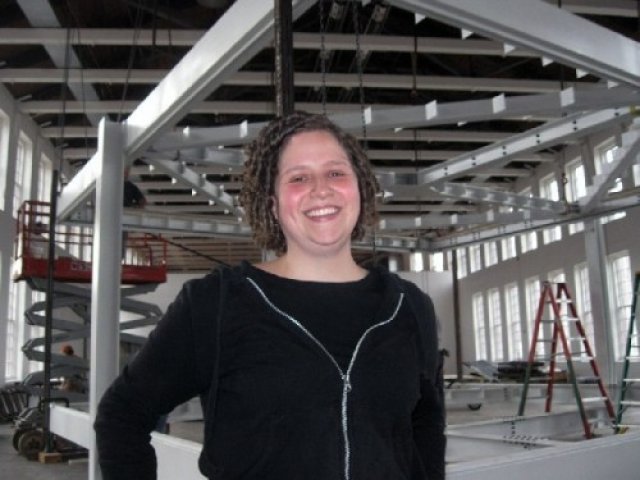 During her time at MASS MoCA, Markonish has shown a deep commitment to supporting artists, pushing boundaries, and creating exhibitions and publications that enliven the connections between art, politics, and wonder. In 2016, reviewing the exhibition Explode Every Day: An Inquiry Into the Phenomena of Wonder, critic Sebastian Smee called her “one the the most audacious curators in the country” (The Boston Globe). She single-handedly visited 400 artists across Canada for her 2012 exhibition Oh, Canada, and produced Until, Nick Cave’s largest project to date.

Her exhibitions include Marc Swanson: A Memorial to Ice at the Dead Deer Disco (also at the Thomas Cole National Historic Site, Catskill, NY); Lily Cox-Richard: Weep Holes; Amy Hauft: Terra + Luna + Sol; Glenn Kaino: In the Light of a Shadow; Suffering from Realness; Trenton Doyle Hancock: Mind of the Mound: Critical Mass; Nick Cave: Until; Explode Every Day: An Inquiry into the Phenomena of Wonder; Teresita Fernández: As Above So Below; Oh, Canada; Nari Ward: Sub Mirage Lignum; These Days: Elegies for Modern Times; and Badlands: New Horizons in Landscape. She has published books with MIT Press, Yale University Press, and DelMonico books; she edited the books Teresita Fernández: Wayfinding (DelMonico/Prestel) and Wonder: 50 Years of RISD Glass and co-edited Sol LeWitt: 100 Views (Yale University Press).

“In Denise's nearly 16-year history at MASS MoCA, she has ensured that the organization is grounded in evolving alongside the potent aspirations of artists, she has supported the creation of new work at critical inflection points in the careers of many, and has developed projects that have advanced MASS MoCA's enduring contribution to culture,” says MASS MoCA Director Kristy Edmunds. “She is an extraordinary and generous leader who builds an inclusive and entrusted process over the epic journey of art making, solving complex problems while managing a phenomenal team in the high head wind pressure of resources, budget and deadlines. Denise is uniquely equipped with the vision to lead and amplify a diverse and growing team of curatorial colleagues and support their specializations and interests while working to support MASS MoCA's overall programming areas and resource position.”

Markonish has taught at Williams College and the Rhode Island School of Design; was a visiting curator at Artpace’s International Artist in Residency Program, San Antonio, TX and The Mattress Factory, Pittsburgh, PA; an advisor and co-conceiver of the SETI Institute’s Artist in Residence Program, Mountainview, CA; and a visiting curator at the Haystack School of Craft, Deer Isle, ME.

She is currently working on projects with Joseph Grigely, Jeffrey Gibson, Vincent Valdez, and Laurent