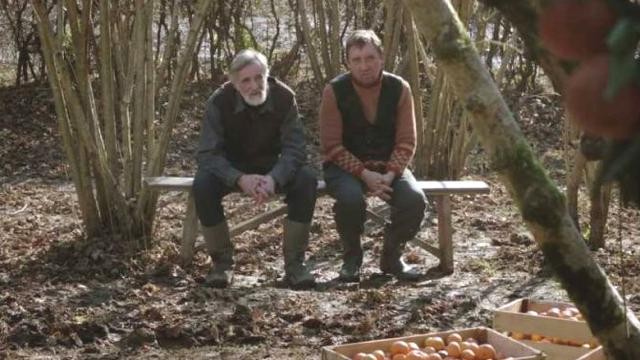 War as a subject matter is a staple of the American film industry. And with good reason. War has always been a hard-core cash cow for business and for those who toil in its vineyards. That’s probably why we continue to find the genre on movie screens around the world. America, however, has experienced relatively few “wars” on its own soil, as compared to those of Europe. The scars of numerous regional conflicts and war run deep in Europe, a continent weary of war, especially after the horror that was WW II.

“Tangerines”, Estonia’s Official 2014 Oscar submission film that screened at the recent Palm Springs International Film Festival (PSIFF), intelligently, and sensitively written and directed by Zaza Urushadze lays out the folly of war using the 1992 Georgian vs. Chechen rebels. as the players in a war designed by others.

There have been Estonian settlements on the Caucasian Black Sea coast for over one hundred years. The conflict, however, forced the majority of Estonian to return to the country of their forefathers. What remained behind were ghost towns with just a handful of Estonians who refused to leave.

When a battle takes place near a rural village, Ivo (superbly played by Lembit Ulfsak) and his friend Margus (Elmo Nuganer) end up caring for two of the combatants who have been seriously wounded. Chechen mercenary Ahmed (menacingly played by Giorgi Nakashidze), and Georgian soldier Niko (portrayed by Mikheil Meskki) discover each other in Ivo’s house while recovering. Ivo soon realizes that housing deadly enemies is not easy. His solution is to calmly declare his home a diplomatic neutral zone, in order to force both of the opponents to survive.

A truce settles over the house as the fighters keep eyeing one another waiting for a chance to settle a score. In the meantime, a Chechen Rebel group on patrol stops at Ivo’s house to check on the recent battle damage. Both Ahmed and Niko say nothing to the rebel commander in charge. Ivo reassures the commander that everything is okay. Once the wounded soldiers recover, they’ll be on their way. And he and Margus can continue to harvest his tangerine crop and then they too, will be on their way out of the war zone.

That’s the long and short of this poignant, cautionary tale of survival under duress in a worn-torn part of the world. The film works most effectively thanks to the deft direction of writer Urushadze and to the excellent cast. I think it’s safe to say that the anti-war message of “Tangerines” will not diminish the impact of an intense, well-crafted war movie that, no doubt, will resonate with audiences everywhere.