Across Shared Waters: Contemporary Artists in Dialogue with Tibetan Art from the Jack Shear Collection 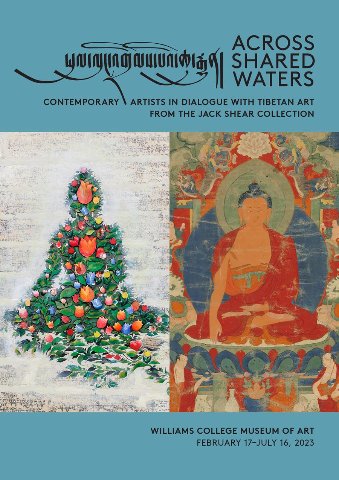 The Williams College Museum of Art (WCMA)  presents Across Shared Waters: Contemporary Artists in Dialogue with Tibetan Art from the Jack Shear Collection, on view from Feb. 17 through July 16, 2023.

Much as the headwaters of Asia’s major rivers form in the Tibetan plateau and flow into the world’s seas, interest in Tibetan art and culture has circulated globally, inspiring artists within Tibetan regions and throughout the world. Across Shared Waters: Contemporary Artists in Dialogue with Tibetan Art from the Jack Shear Collection presents works by 11 contemporary artists of Himalayan heritage alongside traditional Tibetan Buddhist rolled paintings, or thangka, from the Jack Shear Collection, a juxtaposition that highlights the richness and diversity of Tibetan artistic expression and fosters greater understanding and appreciation of Himalayan histories and identities.

Traditional works in Across Shared Waters are part of a generous initiative by collector Jack Shear to foster collaboration among the art museums of Williams, Skidmore, and Vassar Colleges. The paintings and other objects comprising the gift will be used for education, research, and informed display. Across Shared Waters is the second in a series of exhibitions of the Jack Shear Collection of Tibetan Art. The first, Mastery and Merit: Tibetan Art from the Jack Shear Collection, was on view at the Loeb Center at Vassar College in the spring and summer of 2022. The third exhibition will be on view at the Tang Teaching Museum at Skidmore College beginning in August 2023.

The WCMA exhibition is organized by guest curator Ariana Maki, the Associate Director of the University of Virginia Tibet Center and Bhutan Initiative, with Elizabeth Gallerani, Curator of Mellon Academic Programs, and Nicholas Liou, Mellon Curatorial Fellow and MA ’24, along with research support from Curatorial Intern Priya Rajbhandary ’25. Tibetan translation is provided by Rongwo Lugyal.

Pamela Franks, Class of 1956 Director of WCMA, said, “The Williams College Museum of Art is thrilled to participate in this visionary, collaborative approach that engages three leading liberal arts colleges and expands our collective research and teaching capacities to appropriately present this important work. This initiative highlights WCMA’s ongoing commitment of both sharing the art itself and collaborating across institutions to strengthen the pedagogical approaches and research resources within our teaching museum. I am so grateful to Jack Shear, our colleagues at the Skidmore and Vassar museums, and for the engaged scholarship of guest curator Ariana Maki throughout the development of these three exhibitions. We look forward to collaboration long into the future.”

“The Shear Collection provides remarkable examples of traditional Tibetan Buddhist art and its wide range of uses and meanings,” Maki said. “As the academic approach to Buddhism is generally text-focused, the paintings and 3-D objects from Shear offer faculty an incredible set of resources to further enrich their courses and help broaden student understanding of Buddhist practices. Displaying these works allows everyone direct access to better study and appreciate how historical artists masterfully gave form to highly sophisticated philosophical principles.

“It’s exciting to experience the traditional works alongside contemporary paintings and photography. The juxtaposition reflects the innovations and incredible creativity of Himalayan makers, whose works invite us into their lived experiences and challenge us to consider issues that both impact them as individuals and all of us as members of a global society,” Maki said.

Created between the 18th and 20th centuries, the thangka feature elaborate depictions of Buddhist narratives, deities, and practices. Talented, highly trained artists produced engaging scenes detailing the lives of the Buddha, chronicled incarnation lineages, and transmitted teaching stories. Some works would be used by initiates to support advanced meditation techniques while others depict deities who aid Buddhist practitioners with everyday concerns, granting blessings of wealth, long life, protection, or healing.

An opening celebration will be held from 4 to 6 p.m. on Friday, Feb. 24. WCMA is open Tuesday through Sunday from 10 a.m. to 5 p.m. Admission is free. For more information, visit artmuseum.williams.edu.

Join us for the opening celebration of Across Shared Waters: Contemporary Artists in Dialogue with Tibetan Art from the Jack Shear Collection. Visitors will be able to view the exhibit and mingle from 4 to 5 p.m. before a public conversation between curator Ariana Maki and two contemporary artists who have artwork in the show, Marie-Dolma Chophel, and Palden Weinreb, begins at 5 p.m.

Ariana Maki earned her Ph.D. in Buddhist and Himalayan art history, which is the core of her teaching and research. Maki is particularly interested in the intersections of art, text, and lived practices. She is Associate Director of the University of Virginia’s Tibet Center and Bhutan Initiative, where her work includes digital humanities projects, cultural preservation initiatives, and working closely with Tibetan and Himalayan populations. She worked with the National Museum of Bhutan (2009–11) and has maintained an ongoing affiliation with Bhutan’s National Library and Archives since 2012. She served as the U.S. Fulbright Scholar to Bhutan (2019-20).

Marie-Dolma Chophel's work features atmospheric depictions of landscapes and cosmic territories, exploring the tension between chaos and control, the expression of natural forces and the weight of their sensorial impact. Chophel graduated with her MFA from the Ecole Nationale Supérieure des Beaux-Arts de Paris, France. Her work has been shown internationally and throughout the United States in museums, art centers and galleries. Chophel’s work is part of the Shelley & Donald Rubin Collection and she was an Honorary Member of the Rubin Museum (NYC) in 2019. Born and raised in France, Chophel has been living and working in Brooklyn, N.Y., for the past 10 years.

Palden Weinreb was born in 1982 in New York, where he currently lives and works. His multimedia sculptures and precisely rendered drawings follow his search for elusive transcendental phenomena surrounding modern life which approaches a conceptual or spiritual existence, including the afterlife. He draws on Buddhist motifs and ideas while working in repetitive approach guided by a minimal aesthetic. Many of his artworks are an invitation from look where there is a seeming void—between lines, forms, light and darkness. His work has been exhibited at the Rubin Museum, Asia Society New York, Asia Society Texas Center, Queens Museum and the Asian Art Museum of San Francisco.

An evening with Georges Dreyfus: What is a tantric deity and how to become one
March 9, 2023
7–8:30 p.m.
In this talk, Dreyfus will explain the theory that is behind the deities that one finds on Tibetan thangka paintings. He will also briefly touch on their ritual use; however, he will mostly focus on the tantric practices that they aim to depict and support. The talk will last about 45 minutes with time for Q&A from the audience afterwards.

Georges Dreyfus spent fifteen years in Buddhist monasteries before receiving in 1985 the title of Geshe, the highest degree conferred by Tibetan monastic universities. He is currently professor of religion of the Department of Religion at Williams College. He has published several books, including The Sound of Two Hands Clapping: The Education of a Tibetan Buddhist Monk, and many articles on various aspects of Buddhist philosophy and Tibetan culture.

Artist Residency: Lama Tashi Norbu
April 21-28, 2023
For one week, Lama Tashi Norbu will join our campus community to share the many facets of his practice as an artist. He will lead meditation sessions in the galleries and present a public performance on Thursday, April 27, from 5 to 7 p.m. at the museum.

Lama Tashi Norbu (1974 Tibetan-in-exile born in Bhutan) was educated as a traditional thangka painter. He worked at the His Holiness the Dalai Lama residence. Later he completed his art studies in Ghent Academy, Belgium. He creates sculptures, paintings, performances, and more. His activities are between the United States and the Netherlands, where he founded the registered Museum of Contemporary Tibetan Art, the only one worldwide. His paintings are exhibited in numberless galleries and museums all over the world.

Public Tour of Across Shared Waters with Ariana Maki & Closing Celebration
July 14, 2023
5­­–7 p.m.
Curator Ariana Maki, the Associate Director of the University of Virginia Tibet Center and Bhutan Initiative, will give a special public tour of Across Shared Waters: Contemporary Artists in Dialogue with Tibetan Art from the Jack Shear Collection as part of a closing celebration.