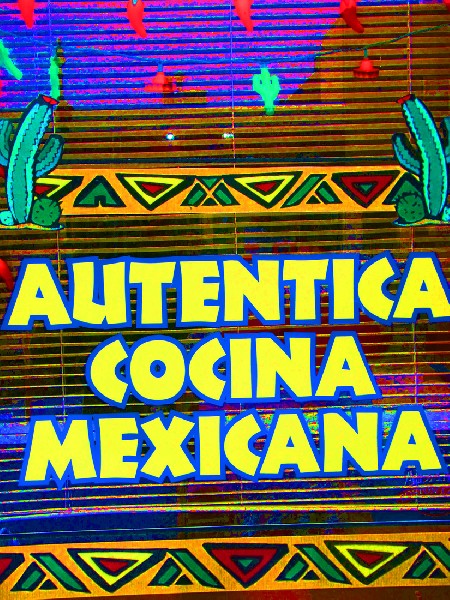 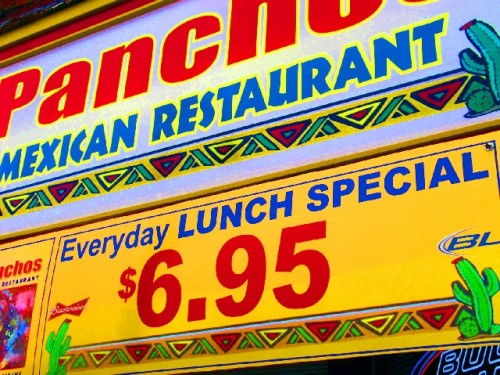 The daily special proved to be all you can eat tacos. 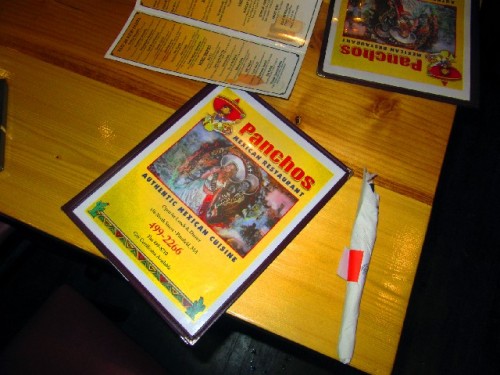 The menu for the restaurant. 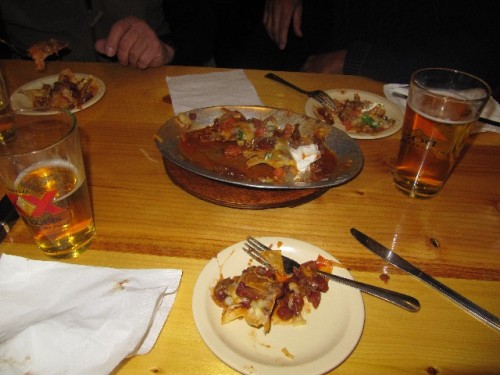 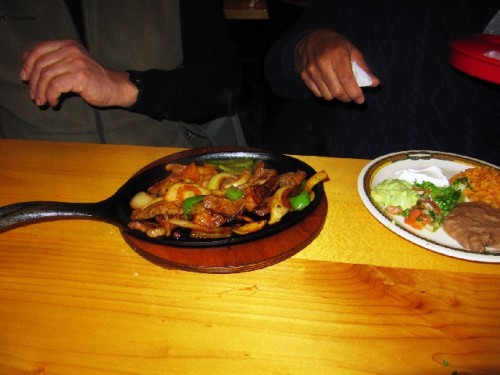 Pancho could not distinguish the bland ingredients of his fajitas. 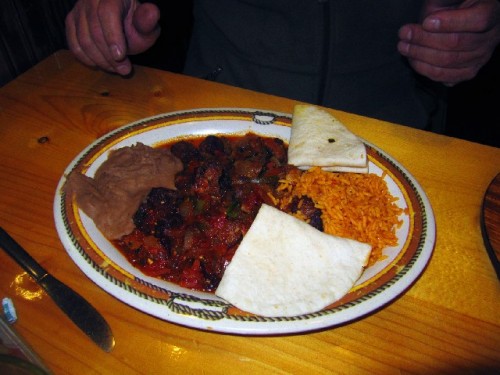 Miguel found the pork dry, unsucculent and not fresh. 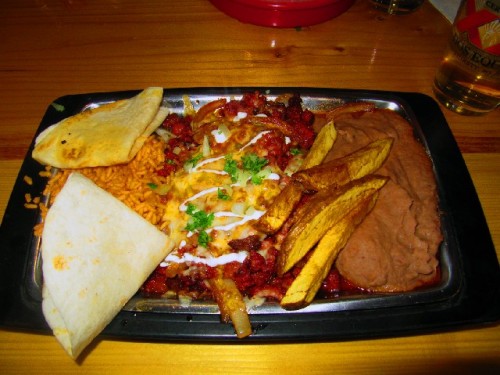 The Enchorizada con Queso was a greasy mess.

The entrance is framed by bright, festive signage. There is a banner above the entrance that proclaims daily lunch specials for an enticing $6.95.

When we inquired the Tuesday Special was all you can eat tacos.

It didn’t come with any sides.

Since we wanted to experience the range of the kitchen we ordered three entrees and an appetizer.

Looking about the large room and bar had the right Hispanic accents including colorful wall murals and other accessories.

As Pancho pointed out with humor there were TVs and loud Mexican music blaring. This is a signifier of authenticity.

It seemed like an enticing setting for three guys to enjoy a tasty lunch, knock down a few drafts and engage in lively conversation.

Although Pancho and our guest, Miguel, are natives of the area this was their first visit to Panchos. Cisco had been there a couple of times previously and ordered the tasteless, generic, Enchiladas ($9.95).

In reality we arrived at Panchos by default. The restaurant we had opted for was closed for lunch and after a quick discussion this was a fall back decision.

There were obvious diminished expectations but we decided to give it a try.

After some consultation with the waitress we ordered what we assumed were popular signature dishes. Miguel ordered the Leguna (Tongue) but the waitress returned and said that it was not available. So we switched the order.  Cisco was tempted by the Chiles Rellenos ($12.95) which is often a test of authenticity. Or the Carne Asada ($13.95) another favorite.

What follows are our comments and evaluations.

Pancho: Subpar, Tex Mex, totally commercial. The Fajitas, my God, the Fajitas at Freight Yard (in North Adams a pub restaurant) has more oomph than this.

Miguel: My Carnitas a la Mexicana ($11.95) was dry. The pork was not succulent, not fresh. It was pedestrian. Mexican food should be subtle. It has to be right. This is just ordinary restaurant food. Part of the problem, look around. There’s nobody here. When I lived in Chicago the ethnic restaurants with take out were always packed. The food was fresh and to die for. There were trays of beef, pork and chicken which they just spooned out. This food has been sitting around and just reheated.

Pancho: And we came in at prime time for lunch.

Cisco: Take the Chili Nachos ($6.75) which we ordered as an appetizer to share. One expects a nice pile of fresh, crisp chips, melted cheese, jalapenos, olives, salsa, sour cream and a spicy, meaty chili. This was a tiny portion, little or no cheese or other ingredients and a watery chili that made the too few chips soggy. It should be enough for three guys and this just barely filled each of our small plates one time. Nachos should be a no brainer for a Mexican restaurant and they served us an embarrassingly skimpy, watery portion.

Actually even the most commercial and generic Mexican restaurants greet their guests with complimentary salsa and chips. Here they were available for $2.50. Which seems inhospitable. Significantly we were not offered water with our meal. So this lack of basics indicates apathetic management and wait staff.

Miguel: They were dispirited.

Cisco: Looking at my plate of Enchorizada con Queso ($11.95) was even visually disappointing. There was a portion of luke warm, refried beans on one side and undistinguished Spanish rice on the other. In the middle was an overly greasy mess of sausage and onion. The food passed its peak several days ago. The sausage had become a blur undistinguishable from the soupy, greasy onion. There were a few old French fries on top, limp with no crispness. What a disaster. At $11.95 we are paying dinner prices for a lunch entrée. So it is no bargain that would make me want to come back. The waitress said that it was one of the most popular items on the menu which is delusional.

Pancho: I ordered the Steak Fijata plate ($12.95) which is always the most accurate test of a Mexican restaurant. It comes with the meat and onions then refried beans, guacamole, sour cream, salsa and rice on the side. Despite being different ingredients they all tasted the same.

Cisco: On a scale of one to ten, considering the food, ambiance and a place to hang out how would you rate Panchos?

Cisco In the kitchen there is no pride, personality or point of view. In the best ethnic restaurants there are cooks who have a passion for their cuisine and its traditions. That also means that there has to be a customer base of like minded diners. People who come for the flavors and ambiance that reminds them of home. Without that Panchos, like so many similar restaurants, just serves a watered down, generic version of ersatz Mexican food. The kitchen help just comes and goes. It’s a job and not a labor of love. At La Fogata, for example, there is a real owner/ chef with a commitment to bring the flavors of his country and family to his customers. Here there was a sense that nobody was in charge or cared about the food being served.