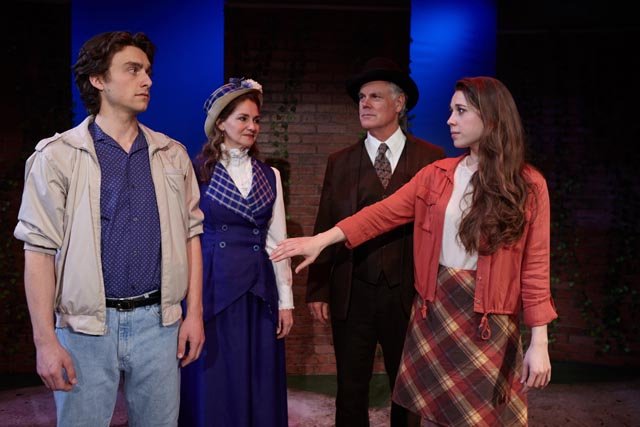 Steven Dietz was among the five most produced playwrights in America during 2019. And now his latest play “Bloomsday,” is on stage at North Coast Repertory Theatre (NCRT), making its Southern California debut.

Life’s journeys are replete with choices we humans make every day. Bombarded with choices, many of which are made in haste without a lot input.  On the other hand, many missed opportunities have slipped away because of too much cogitation and hesitation, and not enough action on our part.

“Bloomsday,” is a whimsical, magical, reflection of unrequited love that didn’t have to be.  What if we could alter time in such a way as to manipulate that pesky time continuum?   Playwright Dietz thought it might make for an interesting and entertaining evening in the theatre to attempt that leap of faith.

What place of whimsy and magical fantasy to set such a play other than in Ireland, land of tall tales and fetching colleens, the land of O’Casey, and of James Joyce and his iconic, epic story “Ulysses,” which plays a part in this ‘what if’ love story.

What better person to direct this non-linear, delightful comedy than Andrew Barnicle, native son of the Emerald Isle and a favorite NCRT director, who was the Laguna Playhouse’s Artistic Director for twenty years.

Director Barnicle is blessed with a cast of talented comedy practitioners who know their way around a witty and sometimes tricky play in order to keep their audience engaged.  Martin Kildare, as Narrator and Robert, is our guide/interlocutor who sets the story points along the way that keeps the story moving.

Caithleen, a Dublin Tour guide (wonderfully played By Rachel Weck), meets Robert and chats him up, only to lose contact later on.  Robbie, a young American of boundless energy played by Hunter Saling, is taken with Caithleen, but these two young people fail to connect, although there is interest on both sides.

Timing, you see, always plays a part in the love equation of “what if.”  To assist the audience in making this charming play work, the character of Cait, winningly played by Jacquelyn Ritz, appears as the older Caithleen, and Martin Kildare reappears as the older Robbie. It may sound a bit confusing, I’ll admit, but in the capable hands of director Barnicle and this talented cast, and as Sherlock Holmes always said to Dr. Watson, “Patience Watson. All will be revealed.” would be my admonition also.

The technical credits at NCRT are always first-rate.  The sets designs of Marty Burnett are legendary, and the light designs of Matt Novotny compliment Burnett’s designs over their years of working as a team.  The costume designs are by Renatta Lloyd, with Hair and Wig designs by Peter Herman, and Props by Phillip Korth.  A special kudo goes to Sound and Projection designer Aaron Rumley whose creative designs over the seasons have lent an authenticity that enriches the overall experience of the audience.  Mr. Rumley also stage manages this production.

“Bloomsday” is a charming production that performs at North Coast Repertory Theatre in Solana Beach and runs through February 2, 2020.