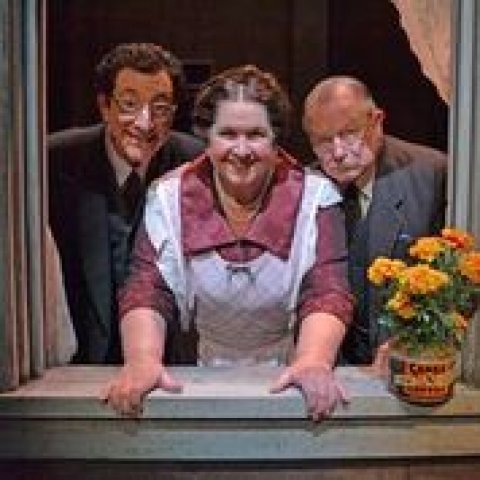 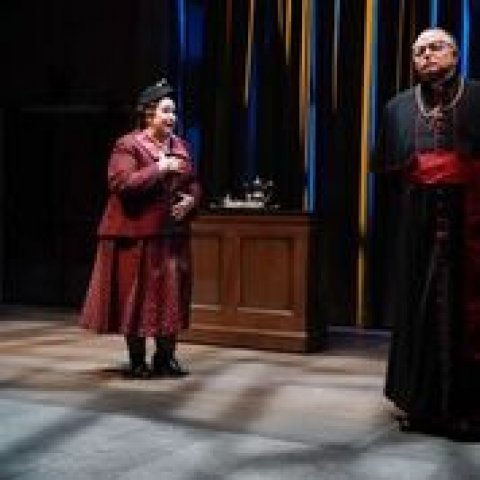 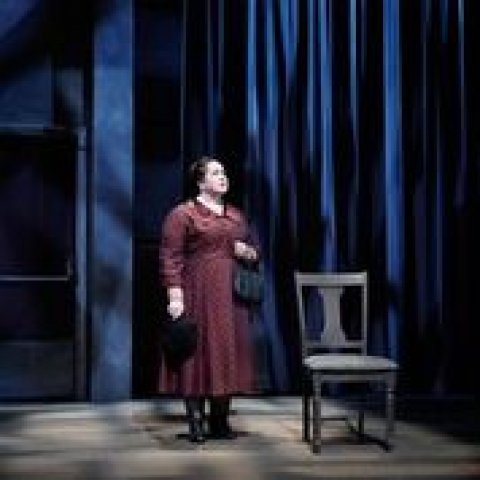 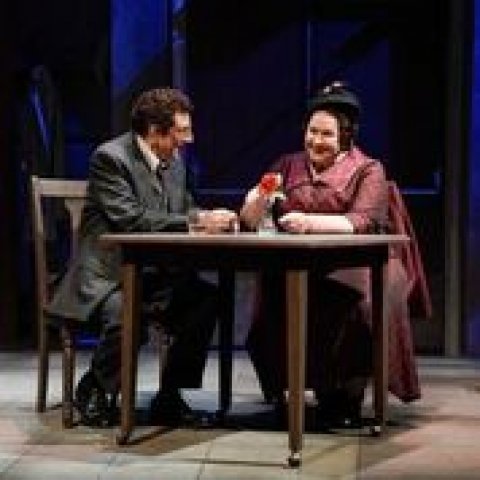 Photo courtesy of GableStage David Kwiat as Philip Loeb and Gertrude Berg as Elizabeth Dimon appear in a scene from Ordinary Americans.

Late actor Philip Loeb was a "stain," which wouldn't "go away," if you believe one of the characters in Joseph McDonough's heartbreaking, humorous and sadly all-too-timely play Ordinary Americans.

Certainly, one could also refer to hatred, fear-mongering and paranoia as stains that are equally difficult, if not impossible, to obliterate.

And for proof, just watch the impressive world-premiere co-production of McDonough's piece, which is running through Feb. 16 at GableStage's wide and intimate space in Coral Gables. Once you leave the theater, pick up any newspaper. Chances are that you'll find a story detailing an incident involving divisiveness, insult-hurling or worse.

In many ways, the 1950's in this country might seem like a completely different world than 2020 America. But at the same time, these two time periods also mirror each other.

Those who lived through the 50's surely recall the horrors of the McCarthy era, when Senator Joseph McCarthy and others accused ordinary Americans of being Communists or sympathizing with them. The result was ruined lives for many.

Meanwhile, some people thought the hatred of Jews was over by the 1950's, with the close of World War II and Nazism. But continued anti-Jewish sentiment, combined with paranoia that many Americans associated with Communism, created a lethal combination that ruined lives and livelihoods.

And despite decades of progress, hate and division still reigns today, with a frightening resurgence of anti-Semitism and racism.

Later in the play, a Catholic Cardinal says, “I worry for the future of this country."

So, it should be easy for many to identify with the characters and issues in McDonough's play. It's about actors on one of American television's earliest sitcoms struggling to save their program, their careers and their dignity in the face of widespread accusations of communism within the U.S.

The program was The Goldbergs, historical figure Gertrude Berg's baby, pride and joy. She created, produced, wrote, acted in and possessed creative control over the comedy, which aired from the late 1940's through the mid 50's. The comedy sent up the foibles of Jewish immigrants from the “old country.”

Government and television officials singled out Loeb for his ties to unions and other organizations, suspecting him of being a Communist.

However, Loeb, Berg and the play's other real-life characters were committed, brave souls who stood proud, determined and defiant.

To his credit, McDonough uses precise, smart, vivid, humorous, eloquent and gasp-inducing language to tell their story. However, the playwright tends to glorify Berg and the others. For instance, in the play, Berg claims she’s “imperfect.” Showing some of her imperfections would have helped create a more complete character.

McDonough relates this tale through Berg’s memory. Through a flashback, we witness scenes from The Goldbergs as well as heated moments between Berg and television officials. Some of the humor from sequences featuring the program can come across as silly. But, they serve a nostalgic purpose and offer comic relief.

Elizabeth Dimon endows Berg with a commanding, forceful, yet restrained presence. Clearly, her character will not yield to people who try to bully her into firing Loeb.

It takes a skilled performer to seamlessly transition to and credibly convey the many emotions Berg experiences. No doubt, Dimon proves up to the task. With wide, expressive eyes, she is, at turns, charming, graceful, comforting, torn, funny, angry, desperate, firm, vulnerable and forlorn.

As though playing Berg weren’t enough, Dimon portrays Molly Goldberg with a convincing foreign accent and a motherly, patient demeanor.

In contrast to Dimon's Molly, Kwiat credibly imbues Jake with nervous energy and impatience. And Kwiat, whose equally wide and expressive eyes convey a sense of urgency, instills Loeb with fierce pride without seeming arrogant.

But this actor's finest moments come toward the end. That is when the garbled, seemingly far-away and echoey voices of several senators shout at Loeb. In particular, the voice of one senator is menacing as he demands to know whether the Loeb is a communist. Lights blink and we hear the sound of a gavel repeatedly pounding. Altogether, the equilibrium upsetting sound and lighting effect deftly mirrors the disorienting, dizzying feeling likely occurring in Loeb’s mind.

With a mixture of bitterness and helplessness in his voice, which cracks, Loeb shouts at the senators. He's a broken man, and Kwiat makes us feel for his character.

We also sympathize with Eli Mintz, an actor on The Goldbergs whom Rob Donohoe plays with sympathy and lightheartedness.

Fannie, the assistant whom Berg says is as important to her as her limbs, is someone we care about. That’s because Patti Gardner imbues her with an earnest devotion. Speaking of Gardner, she also plays Mrs. Kramer on The Goldbergs. In that role, Gardner speaks with a voice that might remind some of Molly Picon's Yente in the movie version of Fiddler on the Roof.

Less sympathetic are some of the characters that Tom Wahl portrays. They include Frank Stanton, who served as CBS’s president between 1946 and 1971. Wahl lends these characters a curt, urgent, all-business, even arrogant demeanor. And when Donahoe, as Cardinal Spellman, somewhat bitterly tells Berg to seek help from one of her “own” (meaning Jews), audience members gasped.

Director Hayes deftly balances tension, pathos and a sense of urgency with comedy. Some scene transitions occur at a cinematic-like pace. Other scenes include longer transitions, featuring lighting designer Steve Welsh's shadowy, non-realistic lighting. This is appropriate; the play essentially takes place in Berg's memory. Also, the use of spotlights is particularly effective when Berg stands alone in a pool of light, abandoned, vulnerable and looking forlorn.

In almost all sitcom scenes, Molly Goldberg refers to and promotes Sanka instant coffee. General Foods, which made Sanka, sponsored The Goldbergs.

Apparently, many enjoyed the instant brand because it was easy to make coffee. Plus, without the caffeine, you could sleep better.

If only wiping away racism, stereotyping, and fear mongering from society were as easy as using instant coffee, surely many of us would sleep a whole lot better.

The world premiere of Ordinary Americans continues through Feb. 16 at GableStage at the Biltmore, 1200 Anastasia Ave. in Coral Gables. Show times are 8 p.m. Thursday through Saturday, as well as 2 p.m. and 7 p.m. Sunday.  For tickets, call (305) 445-1119 or visit www.gablestage.org.