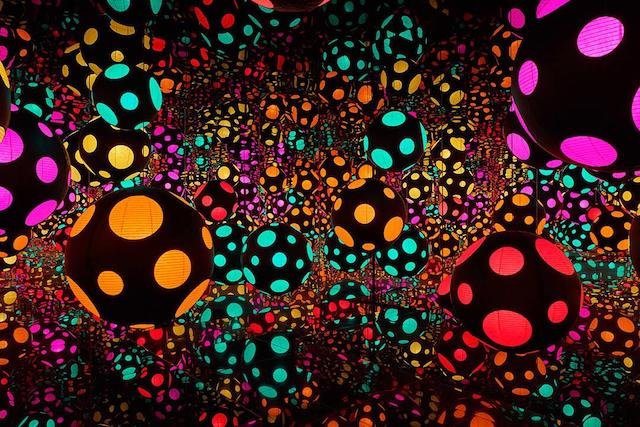 In a landmark collaboration between two leading U.S. modern and contemporary art museums, the Albright-Knox Art Gallery and the Hirshhorn Museum and Sculpture Garden announced today the joint acquisition of an important immersive artwork by Yayoi Kusama. Infinity Mirrored Room—My Heart Is Dancing into the Universe (2018) will receive its East Coast debut when One with Eternity: Yayoi Kusama in the Hirshhorn Collection opens at the Hirshhorn this spring; dates to be announced. The artwork will go on display in Buffalo, NY, in the years following the completion of the Albright-Knox’s campus expansion and development project designed by OMA/Shohei Shigematsu. When the museum reopens it will be known as the Buffalo AKG Art Museum.

Among Kusama’s most ambitious immersive works, Infinity Mirrored Room—My Heart Is Dancing into the Universe represents a dynamic continuation of her artistic investigation of space and time through a series of more than 20 dazzling Infinity Mirror Rooms that create distinctive illusions of a limitless expanse. The jointly acquired mirror room installation is lined on all six sides with reflective surfaces and filled with colorfully lit paper lanterns covered by the artist’s signature polka dots. Visitors are invited to pass through the darkened Room as the lanterns gradually change color and watch as their own reflections are absorbed into seemingly endless kaleidoscopic patterns.

The joint purchase, the result of an important collaboration between Albright-Knox Peggy Pierce Elfvin Director Janne Sirén and Hirshhorn Director Melissa Chiu, is emblematic of the Museums’ shared commitment to championing the presentation and study of the leading art, artists, and ideas of our time.

“The acquisition of Infinity Mirrored Room—My Heart Is Dancing into the Universe builds on the art-historical legacy of the Hirshhorn’s 2017 blockbuster presentation Yayoi Kusama: Infinity Mirror Rooms, which introduced the artist’s spellbinding artworks to record audiences across North America,” said Melissa Chiu. “Our forthcoming exhibition places this recent work in the context of her early painting, sculptures and groundbreaking immersive work. We are grateful to partner with the Albright-Knox to bring this work to view on the National Mall as we celebrate our reopening.” Betsy Johnson, assistant curator at the Hirshhorn, has organized One with Eternity: Yayoi Kusama in the Hirshhorn Collection.

Infinity Mirrored Room—My Heart Is Dancing into the Universe becomes the first major work by Kusama in the Albright-Knox’s permanent collection, continuing the museum’s acquisition of immersive works by global artists. At the Hirshhorn, the acquisition builds on the Museum’s holdings by Kusama, joining not only Infinity Mirror Room—Phalli’s Field (1965/2017), the artist’s first Infinity Mirror Room, but also her sculptures Pumpkin (2016) and Flowers—Overcoat (1964) and her early painting The Hill, 1953 A (No. 30) (1953). Powerfully coalescing key motifs into an environment that offers a breathtaking vision of sublime obliteration, this acquisition expands the ability of both museums to illuminate the breadth of Kusama’s impressive seven-decade career.

Sirén said, “We are delighted to partner with the Hirshhorn Museum and Sculpture Garden in acquiring this extraordinary work by Yayoi Kusama. We plan to debut this landmark installation in Western New York soon after our museum reopens following the completion of our campus development and expansion project. Collaborations such as this one are vital to the fulfillment of our mission to make art accessible to diverse audiences. My team and I are deeply grateful to the Hirshhorn Museum for this partnership.”

Albright-Knox Chief Curator Cathleen Chaffee said, “Yayoi Kusama has always been a trailblazer and a visionary, and we are honored to welcome Infinity Mirrored Room—My Heart Is Dancing into the Universe into the Albright-Knox collection, where it can be contextualized alongside Pop, Minimalist, and installation artworks by many artists who have been her peers, as well as works by contemporary artists for whom she has been a true inspiration. This particular Room is transformational. It is emblematic of Kusama’s kinetic use of color as well as her lifelong disruption of art viewership, as she asks us to see ourselves seeing.”

Between February 23 and May 14, 2017, the Hirshhorn welcomed almost 160,000 visitors to Yayoi Kusama: Infinity Mirrors and a record 475,000 visitors to its building and sculpture garden during the same period—its highest spring visitation since the museum’s opening in 1974, driving attendance in 2017 to 1.2 million. The touring exhibition welcomed more than 800,000 visitors to partner museums across the U.S. and Canada during the next two years. Additional records set by Yayoi Kusama: Infinity Mirrors include:

Yayoi Kusama (b. 1929, Matsumoto, Nagano, Japan) continues to produce paintings at her studio in Tokyo. She studied traditional Nihonga (Japanese-style) painting in Kyoto before moving to New York City in 1958. There she was active in avant-garde circles during the formative years of Pop art and Minimalism, exhibiting her work alongside such artists as Andy Warhol and Claes Oldenburg—both of whom cited Kusama as influential to the development of Assemblage art, environmental art, and performative practices. Kusama exhibited widely in Italy, Germany and the Netherlands in the mid-1960s, participating in exhibitions with artists associated with the Nul, Zero, and New Tendency movements in Europe and beginning to develop her interest in optics and interactive elements such as mirrors, electric lights, sound and kinetics. Kusama’s fame grew in the late ’60s through her radical antiwar “Happenings,” which featured nudity and polka dots in the streets of New York. Kusama returned to Japan in 1973, where she has since resided. In recent years, Kusama has achieved celebrity status and tremendous critical respect.