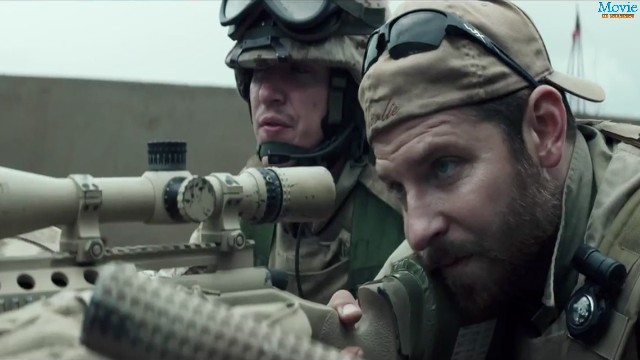 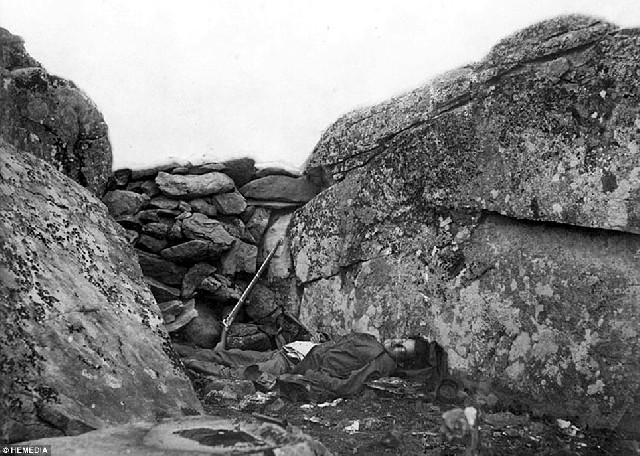 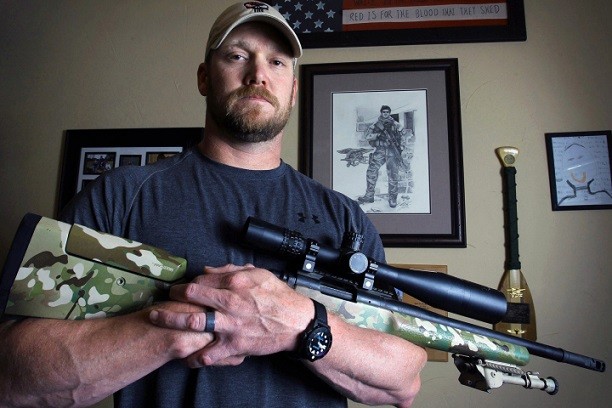 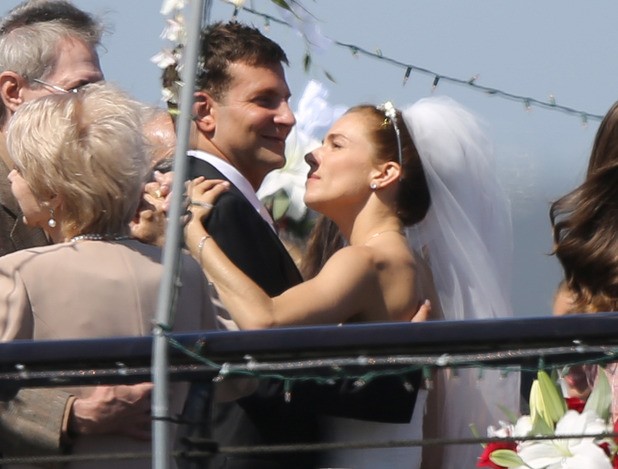 Bradley Cooper and Sienna Miller on their wedding day. 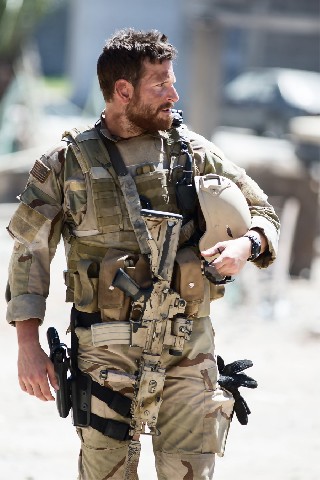 Cooper bulked up for the role. 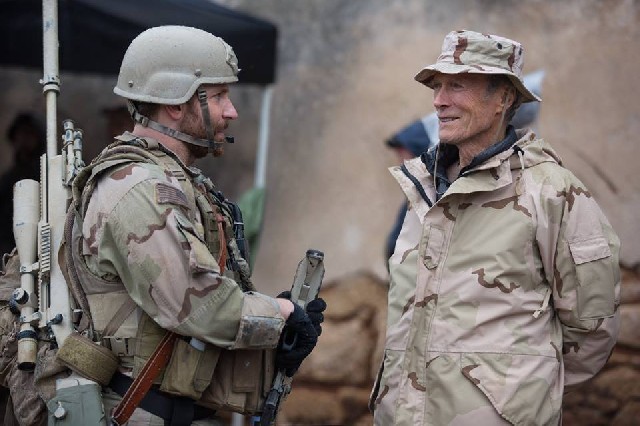 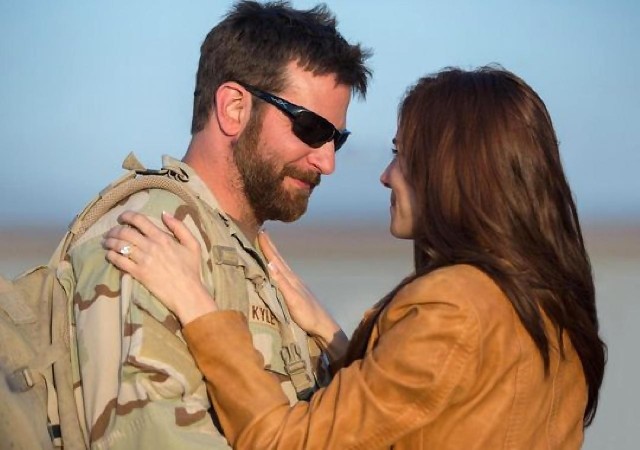 The wives who remain at home are also heroic.

The development of rifles with range and accuracy from their inception changed the protocol of war.

During the American Revolution frontiersmen and back woods hunters hid behind trees as “irregulars” picking off the Redcoats marching and charging in disciplined but vulnerable formations on open battle fields.

While violating the rules of chivalry, so masterfully depicted in the Jean Renoir film Grand Illusion, World War I marked the end of aristocratic military traditions. Weapons including machine guns, gas, tanks, airplanes and submarines were added to improved arsenals of artillery and bombs.

The intent of war is to kill the enemy by any means necessary.

President Harry Truman, noted for his declaration “The Buck Stops Here,” made the ultimate decision to use atomic bombs against Japan. To date we are the only nation to deploy this ultimate weapon of mass destruction.

Despite the threats of living in the nuclear age of Dr. Strangelove Americans were spared the fear of domestic terrorism until the events of 9/11. For many nations and regions of the world it is a day to day reality.

Clint Eastwood, an unrepentant hawk, has yet again divided American opinion with a well crafted and compelling film American Sniper. It is based on an autobiography by Chris Kyle who holds the “record” for most confirmed kills. In a brilliantly nuanced performance, a strong contender for an Oscar for best actor, a bulked up Bradley Cooper evokes the heart and mind of what it takes to end the lives of 160 human beings including women and children.

From Dirty Harry uttering “Make My Day” to the WWII epics Flags of Our Fathers, and Letters From Iwo Jima he has been noted for justice and patriotism inflicted by weapons. It is a theme that both enthralls and roils audiences.

Now 84 most Americans admired Eastwood for his machismo and pumped up patriotism. For democrats and liberals that ended in shock with his "chair" speech at the Republican National Convention. While I continue to admire his work as an artist that glimpse into his inner soul was disturbing if not pitiful and disgusting.

Yet again it revealed that great artists are not by default admirable human beings.

When Truman as Commander in Chief dropped the bomb, not once but twice, it abruptly ended the war and spared American troops the enormous potential casualties of an invasion of Japan.

As John Toland wrote in the two volume The Rising Sun and Eastwood conveyed in Iwo Jima Diary the Japanese military was prepared to resist to the last man. In their Shinto philosophy there was no notion of surrender. Toland described defeated soldiers jumping off cliffs and clustered around their last grenades to commit honorable suicide.

Using atomic weapons was viewed as revenge for the “sneak attack” on Pearl Harbor. There was similar “payback” with the fire bombing of Dresden which had little military significance and was devastating on a par with Hiroshima.

Documentary filmmaker Michael Moore has attacked the notion of Kyle as “hero” for saving the lives of fellow soldiers with the posted comment “My uncle killed by sniper in WW2. We were taught snipers were cowards. Will shoot u in the back. Snipers aren't heroes. And invaders r worse.”

Given Moore’s over the top past remarks it is difficult to have a rational response to anything he says. Arguments about the morality of using snipers, however, have a long history.

During the Civil War the photographer Alexander Gardner moved the corpse of a Confederate soldier to create a famous and controversial staged image The Home of a Rebel Sharpshooter, Gettysburg (1863).

The image of a “Rebel” getting his just deserts played well to defenders of the Union.

In the film Eastwood plays on the notion of heroism with us vs. them contrast between Cooper’s character and a former Olympics medal winning marksman turned sniper Mustafa (Sammy Sheik).

We watch as he picks off American soldiers from the distance of a mile. In a strategy meeting the commanding officer mandates taking out this deadly “son of a bitch.”

It comes down to a duel between Kyle, admired by the troops as ‘The Legend’ and the remote S.O.B. Ultimately, he takes out the enemy but in doing so exposed his position resulting in his comrades being outgunned by swarming enemy troops. They escaped in a timely and blinding sand storm. Having succeeded in putting down the sniper who killed his comrades Klye returned to his troubled wife Taya (Sienna Miller) and two children. With nine month deployments he served four tours in Iraq and Afghanistan.

The dichotomy of Kyle as warrior and family man makes American Sniper into much more than an action/ adventure film. Eastwood presents the complex humanity of a love story and metaphor for women at home who raise children as single mothers. Their lives are no less heroic and valued than their husbands who fight in foreign wars.

It is the range and depth of a superb script and director that allows us to see Cooper, now fully mature, as one of the finest actors of his generation.

Several summers ago we saw Cooper perform in the intimate setting of the Nikos Stage of the Williamstown Theatre Festival. That production of Elephant Man is currently a hit on Broadway. It is entirely possible that he will win both a Tony and Oscar this year. Recognition through both awards is richly deserved.

After seeing him stripped down, knotted and contorted in Elephant Man it was shocking to see him older and bulked up in American Sniper. Once dubbed the "Sexiest Man Alive" he is easing into middle age but evolving as an artist.

Both roles reveal his level of extreme physical commitment to performing complex and remarkably different roles.

There is the inevitable question of what it takes to gun down people with seeming impunity and a lack of  troubled conscience. When asked these questions by his wife or a psychologist his responses reflect a love of country, duty, honor and the highest level of training and discipline as a Navy SEAL.

That moral conflict informs the opening scene of the film. He must make the decision to take out a child given a grenade by his mother. He calls command for a decision but they don’t have “eyes on the target.” It’s his call. He kills both the boy and his mother who charges a group of marines with a grenade.

Back in camp a soldier smirkingly remarks that he heard “You lost your cherry today.” We later see him agonize about taking out a youngster who has picked up the grenade launcher dropped by the victim of his sniper’s bullet. There is compelling insight as he prays that the kid will drop the weapon.

Is one, as Moore states, who remotely shoots women and children a “coward” or murderer?

It’s complicated and who among us occupies the moral high ground to judge such an act?

The young risk life and limb in foreign wars that we may sleep at night. We owe our freedom and security to their sacrifices.

But let us be cautious of the romance of war from Homer’s Iliad to Eastwood’s American Sniper.

Sitting in the dark with popcorn there is so much killing and violence in American cinema. Like the ancient Romans in the Coliseum we are entertained and pacified by the combat of gladiators. Is it any different than The Hunger Games or Robert Duvall declaring that “I like the smell of napalm in the morning?”

On a bitter cold January midweek night our local North Adams cinema was packed. It is more usual to attract audiences of a dozen people like a recent screening of Selma. Which, by the way, had its quota of murder and brutality.

It’s difficult to speculate what the audience took away from American Sniper. For most folks it was an evening of entertainment. Mass audiences don’t go to movies to think or evaluate the nuances of art.

During its first weekend the film took in $105 million. That’s a record for a January release. Yet again the master of machismo, Eastwood, knows how to "Make the Day" of audiences. Kudos to Bradley Cooper for portraying The Legend  as sympathetic and credible.

How ironic that having survived four tours of duty Kyle was gunned down at close range by a wounded warrior he was just trying to help.

It left me with a lump in my throat.