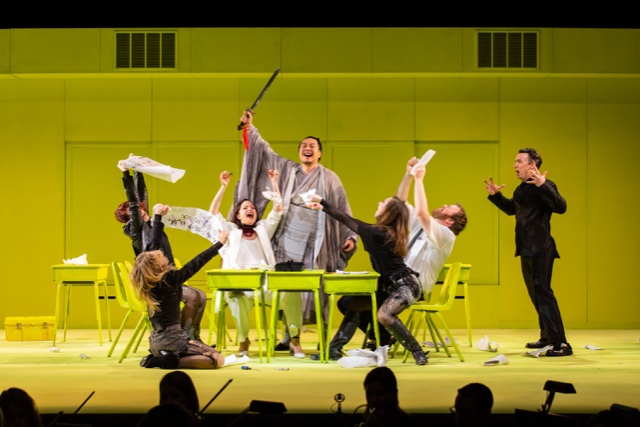 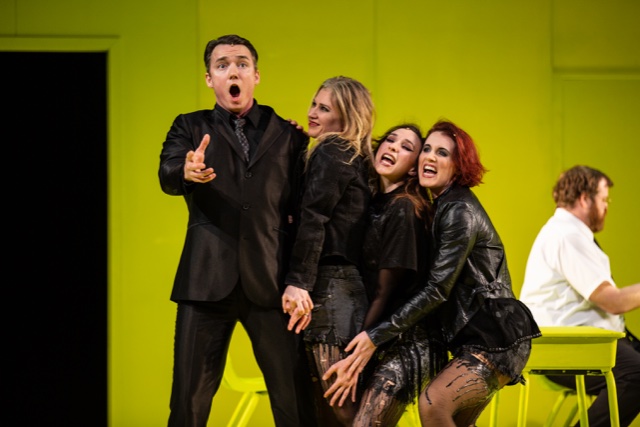 Lucifer and the Furies as Hadas types in the background 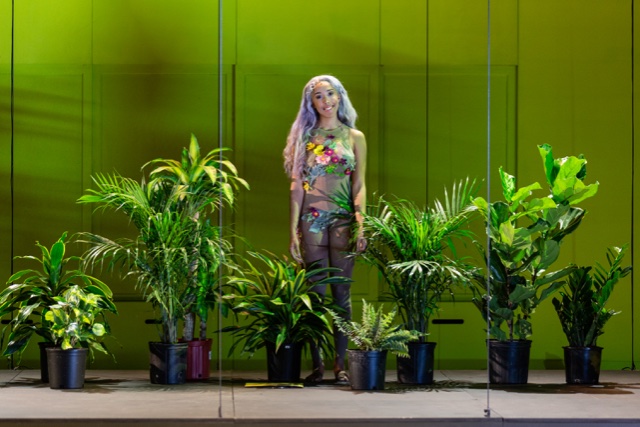 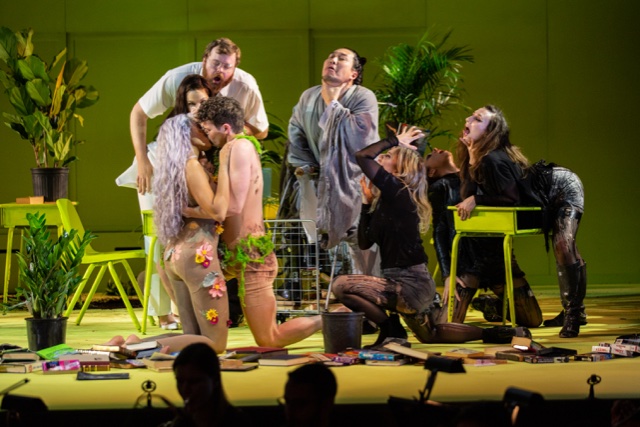 Cast out, Adam and Eve are still full of love 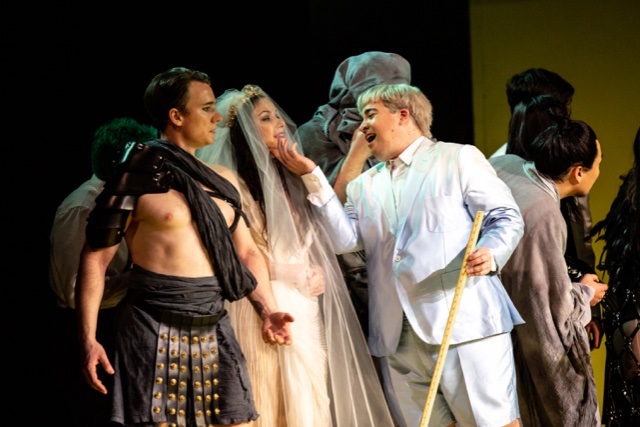 Revelation 22 is the last book of the New Testament. We are given a redacted version to read before we are to see Rev. 23.  At the end of Rev 22., we are told the time is at hand. The book must not be sealed.  And so the pages left blank when Rev 22 was written are now filled in by composer Julian Wachner and impish librettist Cerise Lim Jacobs.  How could anyone possibly have known when 22 was written that God had such fun in mind for humans?  Yet fun it is on stage at the Gerald Lynch Theater as part of the Prototype Festival.

We are immediately struck by the lime color of the set: the walls, lights, desks in a school room where God’s lessons are being taught, or unlearned.  Clever James Darrah captures both the weight of Rev. 23 and its surprising hopefulness in his production.  Responding to an exuberant score by Julian Wachner, the Furies dance together across the classroom, lofting comments, instructions and denigrating the ideas of Lucifer.  This is his world and Alexander Birch Elliott makes a virile, big-voiced demon. Kyle Van Schoonhoven is a rattled Hades with a commanding voice.

Borrowing from Greek mythology, we find Persephone in Hades, now his wife.  She is of course the bridge between Hell and Earth. Coleen Daly as Persephone is a superb singing actress and so beautiful you can easily imagine Hades falling for her.

In order to bring destruction to the peaceful world above, the denizens of Hades bring in Sun Tzu who suggests infecting the minds of earthly beings with subversive literature.  Darkness will then come again. The Hades' inhabitants ascend to distribute dirty ideas.

In Rev 22, the Garden of Eden and Adam and Eve are introduced for the first time since Genesis, thousands of pages ago.  Sophia Byrd looks like an Eve Barbie doll as she first appears amidst the garden’s shrubbery. She describes her voice as soprano with belt which this Eve has.  She moves well reflecting the dancer she also is. Still a college junior, she has appeared at BAM and with Riccardo Muti.  Listening to her and watching is a real treat.

Adam and Eve cast out of the garden are charged with cleaning up the literature distributed widely.  This is Fahrenheit 451 without the fires.

Archangel Michael arrives to protect and heal. Michael Maniaci is a compelling counter tenor, who weaves good will with his charming style.  He orchestrates the conclusion when good and bad people seem joined in joy, following Rodney King’s admonition: why can’t we all get along. King probably got this idea from Archangel Michael.

With jazzy, propulsive lines and big lyric sound, the score by Wachner is irresistible. Daniela Candillari conducts for full effect. This production captures the humor and daring of the participating creative and performing artists.