At Irish Rep Off Broadway 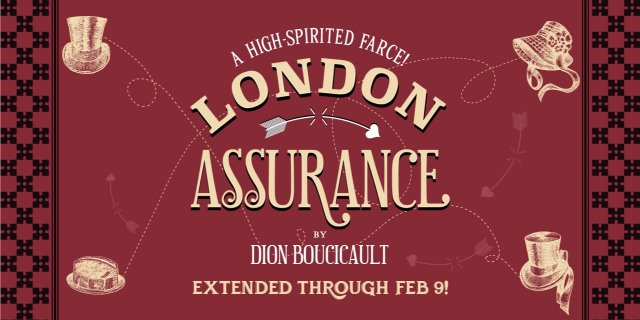 Their choices of what to produce coupled with the actors they choose to cast is wonderful. This includes top-of-the-line, set, costume, lighting, sound, and hair and wig designers for each play. Each and every production is a joyous event. I

Touching of one’s heartstrings is an Irish thing, a deeply ingrained trait, if you will.

First produced in Convent Garden in 1841, when Boucicault was 21, London Assurance, is a farcical comedy of manners, this time directed by Charlotte Moore. It is the cleverest and most enjoyable play to open this year.

It is a precursor to the plays of Oscar Wilde (1854-1900), with more linguistic wordplay than chickens in a coop. His speechifying characters not only tell each other (and the audience too) everything that they are thinking but everything that they would like to persuade themselves that they have thought. Often a familiar phrase is used where dignified language would be expected; sometimes the reverse.

Boucicault’s style as an introduction of words to each other, which have never made acquaintance and which think that they will not get on together. It is ingeniously ear-opening. Though the playwright’s embroidery of language, hand tailored with much thought and observation on culture and class, fits each character like a glove. It is in each actor’s letter-perfect delivery where the fireworks reside.

It is no accident that shards of Oscar Wilde’s (1854-1900) clever wit, sharp satire, striking use of language and keen observation – obviously characteristics shared with Boucicault – permeates London Assurance. Though 34 years younger than Boucicault, it seems the older playwright was friendly with Oscar’s parents. Wilde was not only aware of Boucicault’s plays but had the temerity to send him a copy of Vera; or, The Nihilists (1880), his first play.

“You have dramatic powers but have not shaped your subject perfectly before beginning it,” Boucicault responded. He suggested that “a chain of incidents,” not mere dialogue, should “lead from one to the other” of the main events of the play. A couple of years later, in a letter to a mutual friend he writes that Oscar “…might make a fair income – if better managed – reduce his hair and take his legs out of the last century.”

Like his characters in London Assurance, Boucicault’s life, both as an actor, theater producer and a playwright were a wild ride. He had a great many twists and turns, bankruptcies, a scandal or two, and three marriages. Anne Guiot, his first wife, much older than Boucicault, died in a Swiss mountaineering accident in 1845, the first year of their marriage. In 1853 he eloped in New York City with 20-year old actress Agnes Kelley Robertson. They eventually became naturalized American citizens in 1873. Boucicault suddenly left Agnes and their six children for 21-year old Josephine Louise Thorndyke, whom he married in Sydney, Australia in 1885. A global scandal ensued, as his marriage to Agnes was still valid. It was eventually dissolved by reason of “bigamy with adultery” in 1888.

Along the way the ever-prolific Boucicault managed to write over 125 plays, many of which he acted in both to great acclaim on Broadway, cities across the country, as well as in Australia and London. In the USA, as Irish Rep’s program informs us, Boucicault was instrumental in passing the first copyright law for drama in 1853, and he staged the first-ever matinee performance a year later.

This same period introduced several of Boucicault’s most beloved plays, including The Poor of New York, The Octoroon (the first play to treat seriously the black American population), and The Coleen Bawn, along with major technical innovations in stagecraft, including trap doors and fireproof scenery. His last play A Tale of a Coat ran for a month in 1890 at Daly’s Theatre on Broadway the same year that Boucicault died. His final resting place is Mount Hope Cemetery at Hastings-On-Hudson, Westchester County, New York.

The premise of the play revolves around the 60-something Sir Harcourt Courtly’s (Colin McPhillamy) impending engagement to 18-year old Grace Harkaway (Caroline Strang), some 40-plus years his junior. It seems that her dead father’s will stipulated, inexplicably, that if she refuses to marry Harcourt, the estate goes to Harcourt’s son Charles (Ian Holcomb). If Grace does marry him, something she has already resigned herself to, the formidable dowry,  becomes the property of Harcourt. In short, as both parties frequently comment on, it is an arranged marriage based on economics.

As Harcourt tells it, he has seen her “banker’s account” and looks forward to the 15,000 pounds annually that this marriage will give him. As for the ever rationalizing and pragmatic Grace, adding a whiff of hope to her situation, states that the “gentleman swears eternal devotion to the lady’s fortune, and the lady swears she will outlive him still.”

Sir Harcourt’s character is brilliantly played to a fare thee well by Colin McPhillamy with delicious eye-popping double-takes, physical and facial contortions and abrupt changes of mind. While his portrayal elicits the most laughter, every character, has a hilarious star turn.

The play begins at the London home of Harcourt with light banter between Harcourt’s tipsy son and a newly found friend Dazzle (Craig Wesley Divino), who brings him home from a night on the town. Small talk about marriage takes place between them and Harcourt’s friend, Grace’s Uncle Max Harkaway (Brian Keane). Also, on stage is the annoying presence of Mark Meddle (Evan Zes), a slimy and devious, non-stop talking lawyer. He is eager to make a fast buck by selling information he claims to know. With conversation at a lull, everybody leaves for Harkaway’s country estate to get the engagement underway.

It is here at Oak Hall, amidst an amazingly detailed set (James Noone) and fabulous period costumes (Sara Jean Tosetti) which gently brings us back in time. Here we  meet the lovely Grace, Harcourt’s intended, and the lusty, uber-wonderful breath of fresh air, Lady Gay Spanker (Rachel Pickup), who actually carries a whip. Her equally wonderful, and all accepting – and possibly gay – husband Adolphus Spanker (Robert Zukerman) follows her around like a puppy. In no time at all, with a good deal of double-dealing intrigue, spying on each other, clever repartee and audience-delivered asides, all hell breaks loose.

Harcourt falls in with Lady Gay. Grace and Harcourt Jr fall in love, and the shifty-eyed Meddle, eager to fill his pockets any way he can, attempts to blackmail  everybody in sight. Watching the unraveling and reweaving of everybody’s life, is a satisfying hoot. It had the audience leaving the theater with a big smile on our faces.

London Assurance opened on December 15, 2019 at the Irish Repertory Theatre in New York City at 132 West 22nd Street. It closes on Sunday, February 9, 2020. Playwright: Dion Boucicault, Director: Charlotte Moore. 2 hours and 20 minutes with one 15-minute intermission. For more information, or to buy tickets click on irishrep.org or call 866-811-4111.