The Gulf by Audrey Cefaly 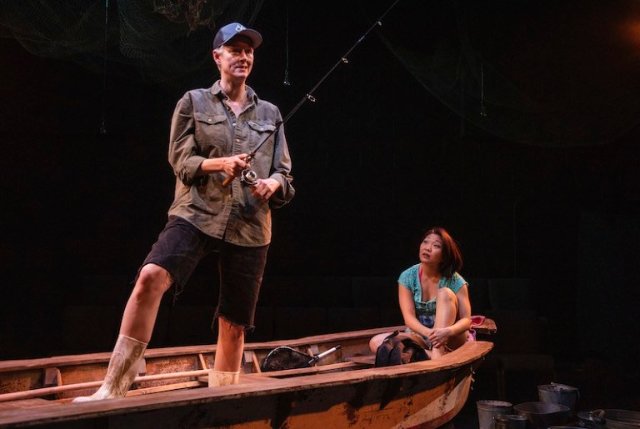 Two women on a fishing boat in the Alabama Delta. One casts and sometimes reels in…nothing. The other alternately suns, dozes and reads. It’s late afternoon on a hot, humid day. Kendra and Betty are southern women, together for six years, but their relationship is fraying, if not unraveling. As it turns dark, they’re stuck in a boat that won’t move. Kendra gets out and sloshes thru the shallows to try to start it up to no avail. They’re in the mud alone to face their conflicting views of happiness.

The Gulf  by Audrey Cefaly is About Face Theatre’s latest production, directed by Megan Carney, now on stage at Theater Wit. The gulf, of course, is both literal and symbolic. The two women couldn’t be more different. Betty (Deanna Myers) is lively, chatty, ready to explore changes in her life and theirs. She wants Kendra (Kelli Simpkins) to consider a new career, something more suited to her than working at the sewage plant. While Betty is attractive in her t-shirt and tight shortshorts, Kendra wears baggy cutoffs, a man’s shirt and a baseball cap. She acknowledges, “I’m a beast, I’m pissed and miserable…. I don’t wanna drown! I just wanna fish and watch football and eat steak…..”

Over the course of the hours spent overnight in a ramshackle boat, Betty and Kendra argue. (Should they move so Betty can go to college and do better than her bartender job? Why doesn’t Kendra want to do better, when she’s smart as a whip?) And sometimes they make up and then fight again. Smart dialogue and strong acting save this play from being boring. The 85-minute duet is broken only by crickets and other delta wildlife, the boat’s movement from Kendra’s oar, and occasional watery background noise. Not much happens. Not even a thunderstorm. It’s not easy to maintain excitement with two people in such a restricted setting, despite director Megan Carney‘s skilful management of the scene, and the two characters’ warm and affectionate portrayals. I found myself checking the time well before the play was over.

Both actors have been seen often on Chicago stages—Simpkins, most notably as John Wesley Powell in Men in Boats at the late American Theater Company, and Myers in Steppenwolf’s recent The Great Leap.

Playwright Cefaly writes realistic dialogue and, although no dialect coach is listed in the credits, both Myers and Simpkins have believable working-class Alabama accents. We’ll get to see Cefaly’s work again next month when 16th Street Theater opens her play, Alabaster.

Joe Schermoly’s set design creatively suggests the muddy shores of the delta with a sea of washbasins partly filled with water. The boat is a stunning derelict, badly in need of a paint job, at least. Lighting design is by Rachel Levy and sound by Robert Hornbostel. Costumes and props are by Caitlin McCarthy.

The Gulf by About Face Theatre continues through February 15 at Theater Wit, 1229 W. Belmont Ave. Tickets are $32 for performances Thursday-Sunday.