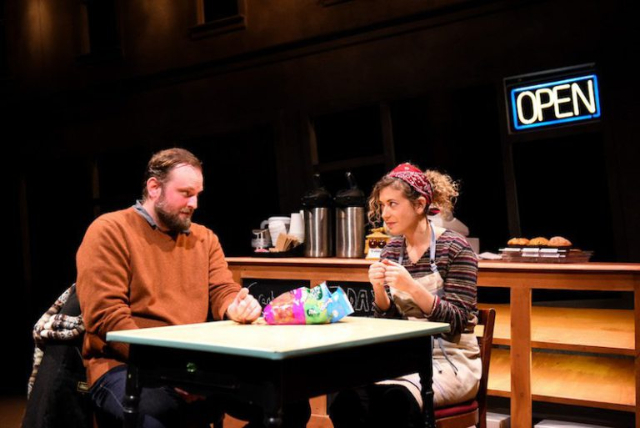 The headlines are about major cities declining—in population, in industry, in jobs. But smaller cities are changing too as revolutions in manufacturing, agriculture and mining affect small cities and towns, in the rust belt midwest as well as in the northeast and south.

In Five Mile Lake, playwright Rachel Bonds tells the story of five young people and the small Pennsylvania town where they have connections. Shattered Globe Theatre’s new production, directed by Cody Estle, portrays their dreams and despair sympathetically, in amusing, sometimes eloquent conversations. Estle moves the 90-minute play along smoothly to show the desires and paths chosen by each.

Jamie (Steve Peebles) and Mary (Daniela Colucci) both work at the bakery. They get there early in the morning to make coffee, arrange the muffins and cookies in the display case—and feed the stray cats outside. Jamie keeps trying to get a conversation going. About Winter Olympics hockey…or even figure skating, which Mary prefers.

Jamie clearly is fond of Mary, but she’s distracted and finally says, “Don’t you ever get claustrophobic?—like don’t you ever want to just tear your skin off and run away and be a whole different person?” That sentence becomes the theme of Five Mile Lake. Are you satisfied with where you are in your life or do you yearn to be in a different place and time as a different person?

Jamie is content with his life in Five Mile Lake. He gets satisfaction out of renovating the old family house on the lake even though he would like to build a relationship with Mary too.

Jamie’s brother, Rufus (Joseph Wiens) arrives from “the city” with his girlfriend Peta (Aila Peck). They’re graduate students and needed a break. Rufus is ABD but stuck on writing his dissertation on “the laments for the dead. In Greek tragedy. And in the Iliad.”

The relationship between Rufus and Peta has been getting rocky. And the trip to Rufus’ home doesn’t help. He sees the home and the people he left and Peta gets a new perspective on traits she doesn’t like.

We also briefly meet Mary’s brother, Danny (Drew Schad); he and Rufus were high school buddies and he enthusiastically greets the visiting Rufus. Danny has served two tours in Afghanistan and now is home, searching for a job and a life.

Varieties of ambition are also part of Five Mile Lake’s theme. As the playwright says in her playbill notes, staying behind in your hometown doesn’t mean you lack ambition. Ambition can take different shapes.

The two-part scenic design sets up the bakery café on one side and the exterior of Jamie’s lake house on the other. Jeffrey D. Kmiec’s set design is practical and changes as needed with J.R. Lederle’s lighting. But I was distracted by the fact that the bakery faces the wrong way. The fluorescent OPEN sign and the pastries in the bakery counter appeal to us, the audience. Not the people who might be looking in the café window. The store entrance is behind the counter, which wouldn’t make sense if this is a real café. The sign would read NEPO to arriving customers.

Nevertheless, the acting by the four main actors is excellent. There’s a different mix of yearning and quiet desperation for each of them. A scene between Rufus and Mary in the café sparkles with the chemistry between them as they discover they really used to have special, unexplored feelings for each other.

Rachel Bonds has developed or produced plays such as Curve of Departure, The Wolfe Twins, Firecracker and Swimmers at theaters all over the country. She was a Tow Theatre Foundation Playwright in Residence in 2016. Her current commissions include works for McCarter Theatre and the Geffen Playhouse.