Our Great Tchaikovsky by Hershey Felder 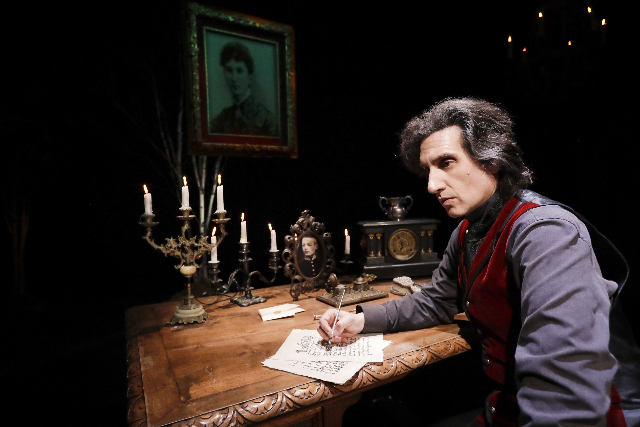 The inimitable Hershey Felder has carved a special niche in theater as a portrayer of great music composers. In his solo performances, he adeptly characterizes a composer and deftly performs his compositions on a grand piano. He has imitated the likes of Bernstein, Berlin, and Beethoven. Currently, he regales audiences at TheatreWorks as the great Russian composer, Piotr Ilyich Tchaikovsky. The choice is an excellent one. The composer’s music is beautiful and familiar. His life’s story offers scope for drama. The result is a compelling entertainment.

Tchaikovsky’s path to fame was slow and circuitous. Although a piano prodigy, he was schooled for the civil service and didn’t complete the music conservatory until he was 25. He would die at age 53. In that relatively short interval, he would produce some of the world’s most memorable and respected classical music. But acceptance of his work was slow and begrudging. His great 1st Piano Concerto in B-flat Minor was trashed by Russian critics, and only after resounding plaudits from an American tour did it receive its deserved recognition at home.

Russian music was ascendant when Tchaikovsky was breaking through, led by a group self-styled as the Mighty Handful – Rimsky-Korsakov, Mussorgsky, Borodin, Cui, and Balakirev. This cabal sought to create a uniquely Russian classical idiom, that embraced folk themes, Orientalism, and technical characteristics that provoke a sense of ominousness and elusiveness. Tchaikovsky, however, believed that music had no boundaries. Although he refused to adhere to the theories of the Mighty Handful, he incorporated some of their methods and bridged their approach with the traditional Western European ways.

The complete auteur, Felder not only plays the piano score and acts the role of Tchaikovsky, but he wrote the script as well. He emphasizes the composer’s humanity and generosity to family and strangers as well as his anguish. In particular, the storyline dwells on the composer’s homosexuality as being an overarching influence on his daily life.

Although Tchaikovsky’s sexual preference is generally acknowledged by most historians because of the record of public associations, dedications, and such, Felder extrapolates well beyond the documented to impute thoughts and actions. This liberty may not represent good research, but it does result in better storytelling by connecting Tchaikovsky’s passions to other humans. Even the composer’s death is tainted with the speculation that he took his life because of his angst over a preference that was unaccepted in his day.

One deviation from the biographical format of the show is Felder’s exposition (expressed in his own persona rather than the composer’s) on the treatment of homosexuals in Russia today. He does provide relevant linkages of the current situation with Tchaikovsky and with Russian government interest in this show being performed there. However, it is unclear whether formal interest has really been expressed by the Russian government or whether the notion is a fictional plot device. In any case, it is interesting, but some may feel it deflects from the subject at hand.

Felder depicts his subject with great authority. Adopting a Russian accent and presenting an appearance in keeping with place and time, his characterization adds to the overall ambiance. So does his masterful piano work at the black lacquer Steinway grand. He performs the cream of the composer’s catalogue, with excerpts from the 1st Piano Concerto, the 6th Symphony (known both as “The Passionate” and “Pathétique”), The 1812 Overture, Swan Lake, The Nutcracker Suite, and more. Aficionados and wannabes may carp that some of the numbers that are played are not properly introduced, and in fact, those prior to the playing of the 1st Piano Concerto are not identified in any way. But more importantly, Felder plays each piece with skill and enthusiasm.

What distinguishes this solo performance from many others is the quality of the production values. The staging far exceeds expectation. Felder himself designed the set, which incorporates a Russian interior downstage, with a birch forest exterior to the rear. Christopher Ash’s lighting and projection design are stellar. Overall, lighting levels are dramatically low but effectively variable. The backdrop to the stage is a curved curtain running the width of the stage. Subtle, often monochromatic and sometimes moving, images are projected throughout. Deer graze and crows fly through a forest. Humble villages and big cityscapes show the land of Tchaikovsky. In all, it provides a total effect that feasts the eyes as well as the ears.