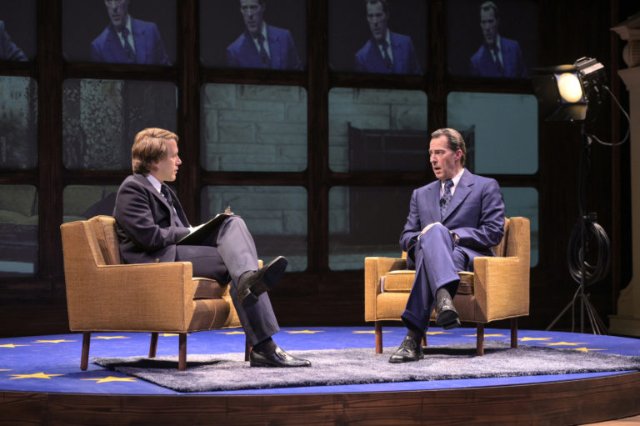 Each year, a theater company must make artistic and financial decisions in selecting productions for the following season. Recently, many theatrical works have particularly resonated given the current political environment. Perhaps the most foreboding has been Sinclair Lewis’s It Couldn’t Happen Here which is about a president assuming dictatorial powers.  A common criticism of the play was that it was not realistic, but then the election of Donald Trump occurred, and some of his predilections have worried many Americans.

Now, TheatreWorks has revived Peter Morgan’s Frost/Nixon, which in our current political climate may be considered Back to the Future: the Presidential Episode. It is hard to imagine that this selection wasn’t influenced by concerns about the character of the current administration. The parallel circumstances and personal traits of presidents Richard Nixon and Donald Trump are telling – hubris, denial, obstruction, dislike for media.

Of the two figures, however, Nixon appears the more tragic as he did seem to truly care about the country, unlike Trump. In Morgan’s characterization, it is easy to sympathize somewhat with Nixon. Notwithstanding that his political leanings were divisive and his personality lacked warmth and sincerity, Richard Nixon was a accomplished politician. Among his considerable achievements were establishing diplomatic breakthrough with China; signing every civil rights law passed by Congress; and establishing the Environmental Protection Agency and Office of Budget Management – a decided liberal agenda. He even pursued universal health care.

Nixon did not paint himself into idealogical or strategic corners like the current president or intentionally inflame political adversaries. His downfall resulted not from initiating an illegal activity, but as is the inclination of many politicians, from obstructing and denying after the fact. It is already clear that Trump has covered up.  Time will tell whether he initiated illegal activities.

In 1977, still scorned and isolated three years after resigning from the presidency, Nixon was approached by second-rate, British talk show host David Frost to participate in a series of interviews. Nixon saw the opportunity to tell his side of the Watergate story, extol his achievements, and earn some well needed money.

Dramas such as Frost/Nixon – modern history as theater – present challenges. Those who lived through whatever subject at hand may feel they remember the facts well enough that a rehash will offer little interest. Those who sense there will be a political tilt to the play that doesn’t conform with their own may resist attending. In the case of Frost/Nixon relatively little time is dedicated to the interviews that were on television as part of the public history. What enriches the public narrative that some may know is the backstory. How did the television deal evolve? What kind of risks did the principals take? Who were the other influencers who shaped the process? What were the goals and strategies of the key players?

Through it all, we learn about the warriors who sat in the chairs and the men who prepared them for battle. We see a humbled and downtrodden past president trying to rebuild his reputation, to connect with people, and more importantly to him, to regain a sense of purpose in his life. Nixon was a man of considerable intelligence and fortitude who had overcome his social clumsiness, unsympathetic personality, and nervous perspiration to reach the pinnacle. But at the time of the interviews, he came to rely on others of less consequence in hopes of ascending again.

David Frost is revealed as a somewhat shallow party boy. Also looking to resurrect his presence in the United States, he knows how to seize opportunities and is willing to take tremendous financial risks. But the imbalance in competence between the two men is exposed in the first interview as Frost allows Nixon to drone on for 23 minutes in answer to a question of little significance.

One weakness in the script deserves notice. Stories of this sort that are built around real people and real situations may be characterized as fictionalized plausible reality. We can infer that behind the scenes action of this sort could have taken place, and nothing otherwise presented reflects a falsification of history. However, one scene concerning a middle of the night phone call from a drunken Nixon to Frost that reveals things that Nixon would never have exposed crosses the line. It is unnecessary and unworthy fantasy in what can stand ably as a dramatized documentary.

Frost/Nixon works for a number of reasons. The character revelations are intriguing, especially Nixon’s complexity, with a mix of pride in what he did and self-loathing for the failures brought about by his social ineptness, his paranoia, and the poor judgments about Watergate that led to his downfall. The references to events during the Nixon administration are informative. But the drama unfolds from the interactions leading up to and behind the scenes at the interviews. Even though the historical record is available, the tension builds as we wonder which contestant will better achieve his goals.

The pace is rapid, with numerous scenes and changes of venue. Scenic designer David Lee Cuthbert makes good use of the venue’s pulley systems for moving set pieces around with great dispatch, and the matrix of video cells as the back wall of the interview stage adds richness and a sense of authenticity. The cast is led by Allen McCullough, who succeeds in conveying the vocal character and gesticulations of Nixon, along with Jeremy Webb, who is effective as Frost. The remaining cast is otherwise good overall, but uneven in parts.

Frost/Nixon by Peter Morgan is produced by TheatreWorks Silicon Valley and plays at Mountain View Center for the Performing Arts at 500 Castro St., Mountain View, CA through February 10, 2019.

Posted courtesy of for all events.