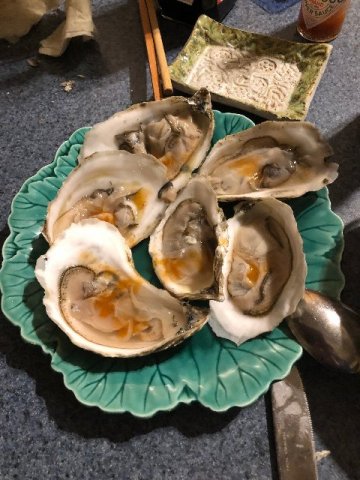 A plate full of shucked oysters. All photos by A. Hiemer 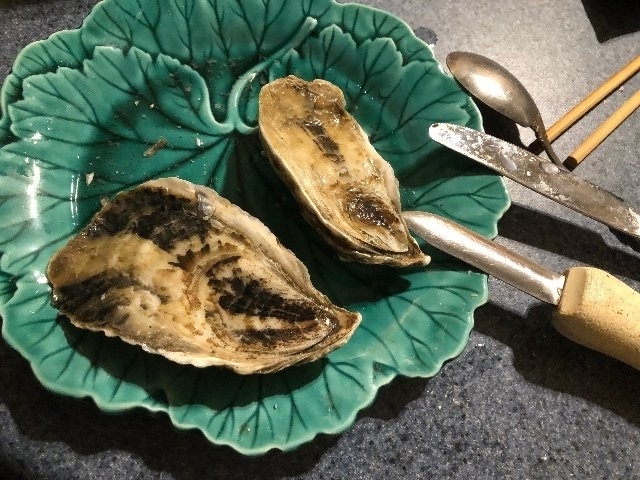 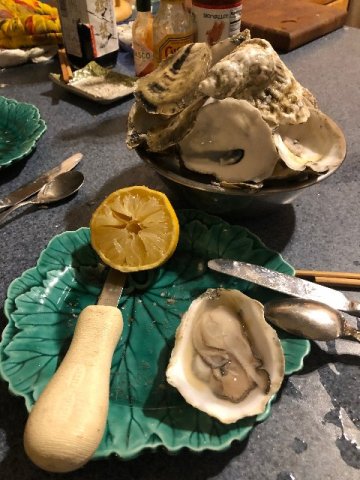 Oyster knife and a bowl full of shells. 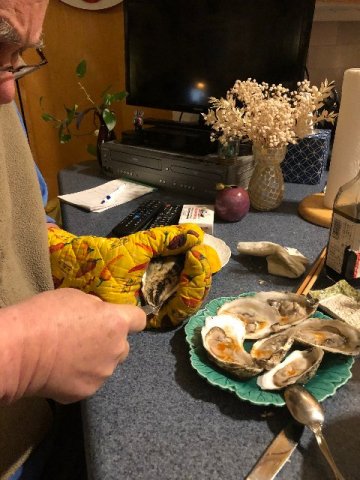 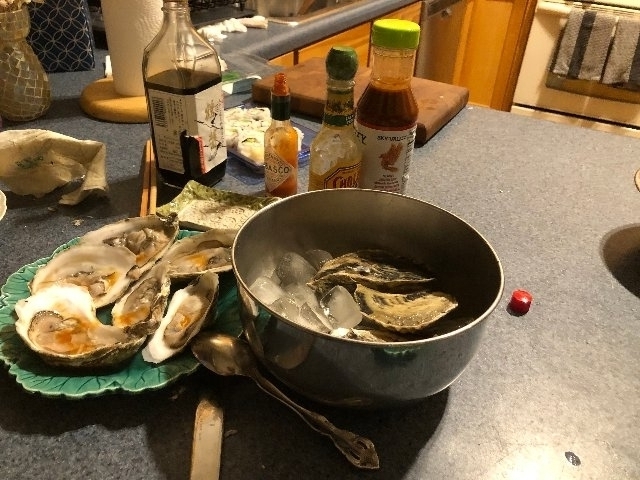 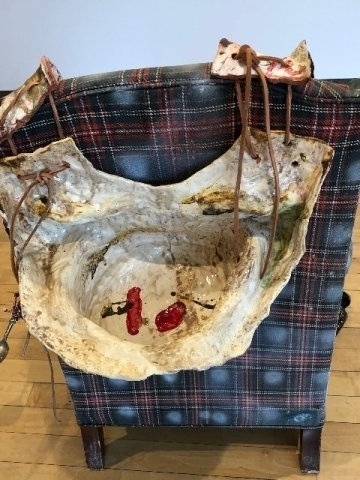 It’s known from coast to coast that Wellfleet Oysters are one of the best! When we saw the sign for Wellfleet Oysters for $ 0.99/each at our nearest grocery store, Big Y, in North Adams – we had to buy a dozen. It is still oyster season and they may have come from Puffer Oyster Farm, located in Wellfleet Harbor, or Field Point Oyster Farm, off Fox Island Wildlife Reservation. Farmed oysters feed on plankton and other organic matter, just like the natural ones, without needing added chemicals or antibiotics. They are self-sustaining, farmed on racks and inside ’bags.’ Actually, oysters contribute to cleaning waters. They are nutritious and good for the environment.  Millions, perhaps hundreds of millions of oysters are farmed up and down on both coasts of the Atlantic and the Pacific Ocean in various locations, names and varieties.

Yes, oysters are great filterers. Two big projects in New York, The Billion Oyster Project and the Hudson River Park Trust's River Project aim to restore New York City harbor and the Hudson River to healthy waterways, which will take many years. The newly installed oyster reefs, since 2014, also protect from storms and prevent waterway erosion. Both projects continue to install reefs. They are also assisted by many volunteers and currently by thousands of New York students.

Checking on Fulton Market, New York and Boston, one can order online 14 East Coast and 8 West Coast oysters by names, which all have their own distinct tastes, flavors, and sizes. Wellfleets were one of two best known kinds for decades. Now, however, the meroir of oysters is very individual and desired depending on the waters and surrounding feed environments. (As in terroir of wines.) There are only five oyster species. Eastern oysters are Crassostrea virginica and now grown into hundreds of varieties. Some names are: Beau Soleils, Wellfleets, Delaware Bays, and Malpeques. Then, some Pacific oysters, Crassostrea gigas, are called: Fanny Bays, Hammersleys, and Hood Canals.

Oyster meat and its brine contain zinc, calcium, selenium, vitamin A and B12, omega-3 fatty acids and they are high in protein. Rumored as an aphrodisiac for centuries it cannot be proven, yet perhaps the Placebo Effect works just as well.  -- The earliest oyster consumption has been mentioned in the 17th Century in western literature.

Now, I still have an oyster knife from the 1990s or was it 1980s? We’ve held on to it for all these years and have not used it in a decade or more. The friendly sales woman encouraged us that we will able to shuck the oysters. So, we brought oysters home, put them on ice in a metal bowl and intended to fry smelts and eat a selection of sushi as well. In the end, we had oysters and sushi and felt a real accomplishment in relearning how to open oysters. It was great fun! Please see our series of photographs above.

Susan Woll, me, and our two girls, Lauren and Olivia, spent a couple of weeks in Wellfleet a lifetime ago (1990/80s). We had discovered a non-commercial clams and oyster bank, where we were allowed, without a license, to dig for clams and pick-up oysters. We would walk out at low tide. The clams would leave a small hole in the sand, sometimes even spit water onto the surface, which indicated that there were live clams below. First, we started digging for clams; however, when it became clear to us that the oysters were just lying on the beach surface, oysters were it! What fun and, as I already mentioned, our oyster knife goes back to those days. Being more food adventurous than Susan, she did not think that she would use the oyster knife again.

While in Wellfleet, we had called Professor Gyorgy Kepes and his wife Juliet Kepes, who owned a summer home in Wellfleet on a rare inland lake. He had encouraged me to get in touch, while we were there on vacation. I had known Prof. Kepes, the founding director of the Center for Advanced Visual Studies, at MIT, since 1975, while I managed The Center for nearly a decade.  So, we visited them one day with a bucket full of fresh oysters. We all enjoyed the afternoon with them, had a feast - and who opened most of the oysters, I do not remember.

But back to our recent evening: In the end we had 14 oysters, lemons, Tabasco Sauce, and other hot sauces on the table. Also, a very special soy sauce for sushi with added pickled ginger Gari. We both opened some of the oysters, our left hand protected by a thick kitchen glove. It’s easy to miss opening a shell, while digging hard near the oyster hinges, and trying not to injure yourself. The shells are rough on the outside and wonderfully smooth on the inside. I had to defer the bigger and tougher shells to Charles. He has more strength, since he’s been pushing weights for the past eight months and his right arm biceps are bulging bigger every day, according to him.

The oysters just go down easy, soft, and are surrounded by salty sea water, the brine. It’s not everyone’s delicacy. We enjoyed slurping them. And, we both felt a great deal of accomplishment, having worked diligently for our meal! We had fun, which we seriously try to experience every day! We’ve earned it, while still working hard at maintaining Berkshire Fine Arts and other artistic and cultural projects.

These Covid-years have their challenges daily everywhere around the world, as well as severe hardships and tragedies - millions of people have died already.

Yet, these are also times to live intentionally, while trying not to get infected by the virus, the current Omicron.