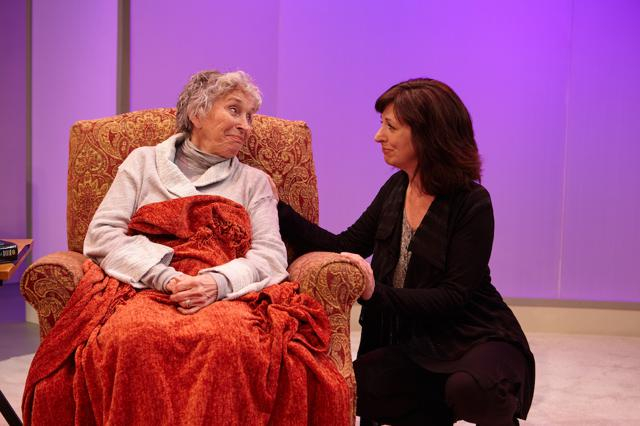 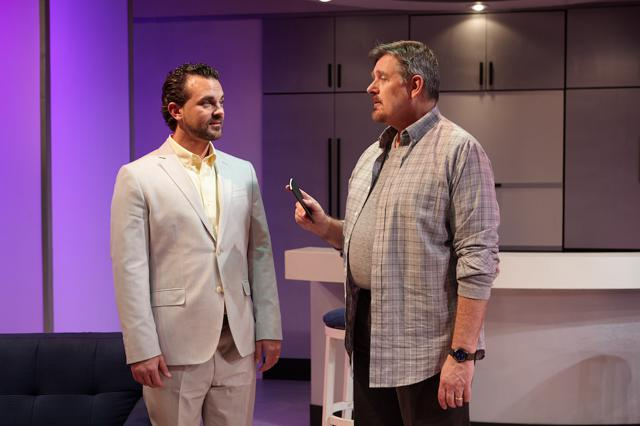 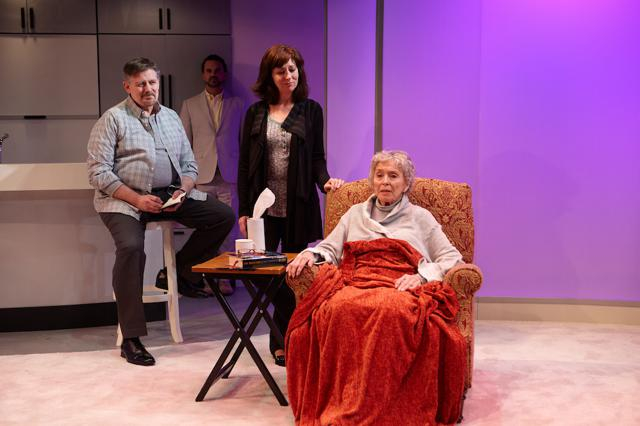 The power that are in words are the keys to understanding; with clarity comes hope, and a great many more feelings, all merging into a larger life-affirming force that becomes the tools of the writers, the playwrights, the actors, the technicians, and the creative artisans who move us to feel human.

When we’re in their thrall, these creative artists motivate us to be more introspective to sooth and comfort those grieving souls around us and to assist those less fortunate.  They heighten our memories that are so essential to life. These are but a few of the gifts that the live theatre experience celebrates. Here’s another… we’re the only species that has the ability to smile, which then leads to laughter; a staple of most theatrical experiences.  North Coast Repertory Theatre’s San Diego Premiere production of “Marjorie Prime”, is written by Jordan Harrison and deftly directed by Matthew Wiener. The drama incorporates all of the necessary components that ‘words and technology’ can muster and then transforms the totality into a superb, satisfying futuristic look at the technologically robotic driven world of tomorrow, that is actually here today.

The story playwright Harrison presents is a tale set in the not-to-distant future in which artificial intelligence is used to treat dementia and depression in the forms of “primes”- ‘humanoid’ lifelike robots that speak with patients in the form of lost loved ones and provide companionship for the lonely. They are basically programmed as memory machines to sell to the elderly as a way of easing the frustration of elderly people fighting the effects of dementia.  Marjorie’s prime is modeled to look and talk like her dead husband Walter, at age thirty. I know, but the idea is not as disquieting as it sounds.  It’s actually fascinating when seen on a stage.

Marjorie, who is 85 in the play, is winningly played by Dee Maaske, who brings the quality of a bored, tough, old woman who still has issues to discuss with her daughter Tess (played by Elaine Rivkin). Marjorie’s decided she’s not quite ready to join her husband Walter just yet.  It’s a wonderfully focused performance by Ms. Maaske.

Ms. Rifkin’s Tess, is a bit of a Freudian delight when it comes to the love-hate, mother-daughter relationship.   At times, Tess feels guilty, yet irritated, then she’s concerned and caring where Marjorie is concerned. And she feels her husband Jon (nicely portrayed by Greg North) as the peacemaker always seems to side with Marjorie. Ms. Rivkin turns in a nicely nuanced performance.

Jon played by Greg North, is the glue that keeps the entire family together. He’s the son-in-law that delights every mother.  He’s kind, caring, understanding, and he really listens to both his wife and his mother-in-law. Mr. North has stage presence, and although a big man, he brings a  warm quality with energy to his character  It too is a winning performance.

Walter the Prime, as played by Steve Froelich, is a study in discipline and stamina.  He portrays Walter at age 30. He must be always be engaged with the on stage action but must be presented to the audience, not as a robotic, monotone voiced machine, but a warm, smiling, pleasant, engaging memory of Walter.  He sits, he stands and walks like a perfect facsimile of Walter. Like his fellow actors Mr. Froelich also delivers a fine performance. The real beauty of this highly skilled production lies in the fabulous ensemble performances of the cast.

In the technical department led by director Wiener, Set Designer Marty Burnett has created a slick-looking, futuristic set with cleans lines and a muted color palette. The projection designs on each side of the set give the scene changes an ethereal look and is an inspired touch. Matt Novotny’s light design compliments the set and the costumes of Elisa Benzoni. Melanie Chen’s sound design and Andrea Gutierrez’s props and Peter Herman’s Wig designs complete the technical team.

North Coast Repertory Theatre has another triumph on its hands with its sublime show of “Marjorie Prime”.  The stellar production runs through February 5, 2017.