Arthur Miller’s All My Sons 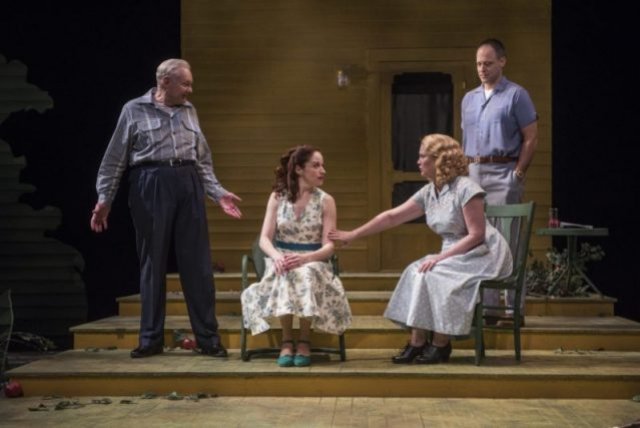 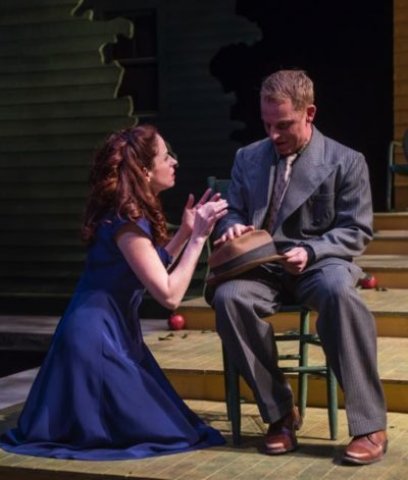 Charles Newell’s production of Arthur Miller’s All My Sons at Court Theatre is an emotionally wrenching tragedy. Secrets and lies that have been hidden for years are gradually teased out. Not until the last few minutes do you understand the enormity of the story and then it punches you in the gut.

The play is set in 1947 in the back yard of the home of Joe and Kate Keller. The setting is usually a traditional mid-century back yard with plants, trees, a porch, outdoor furniture and the facades of two other houses partially visible. In the Court Theatre version, John Culbert’s scenic design suggests this back yard in a deconstructed, stylized way.

Joe Keller (John Judd) is Miller’s modern take on a Greek tragic hero. He’s a decent, self-made man concerned about his family and his company. Joe was exonerated for the company’s war crime–delivering faulty aircraft parts that caused 21 planes to crash—but his partner, Steve Deever, is in prison. That story always looms in the background and eventually overtakes Joe. As if to emphasize the classic nature of the story, at tense moments, the two next-door couples come out and stand as witnesses or silent choruses.

Joe’s wife Kate (emotionally and truthfully played by Kate Collins) is a typical 1940s housewife, but she believes that her son Larry, who was missing in action in 1943, is actually alive and will return. She gets more support when Frank, a neighbor with an interest in astrology (Bradford Ryan Lund) determines that November 25, the day Larry went missing, was a favorable day for him and therefore he could not have died that day. “The odds are a million to one that a man won’t die on his favorable day,” Frank says.

All My Sons takes place on one summer day when Ann Deever (Heidi Kettenring), who used to be the girl next door, comes to visit from New York. She was Larry’s girlfriend and Kate insists she still is. However, her other son, Chris (Timothy Edward Kane), has always been in love with Ann and they soon discover that she shares his love. She gets an urgent call from her brother George (Dan Waller), who has been to visit their father in prison and needs to talk to Ann. George is on his way. His arrival sets a series of actions in motion that lead to the play’s conclusion.

Newell’s direction in this hyper-real story is profound. He takes an ordinary family and delineates their story at the height of tragedy. His cast also benefits by his excellent direction. Collins and Kettenring offer fine, authentic performances. Judd is a tower of strength that others rely on until his collapse. Kane portrays Chris as a sensitive and ethical man, who ultimately faces off against his father.

All My Sons was one of Arthur Miller’s first plays, and his first commercially successful one, written when he was 28. He based it on a news story about an Ohio aircraft manufacturer that conspired with military inspection officers to sell faulty aircraft engines to the Army Air Force. That story gave Miller the hook for the play and its critique of capitalism. But it’s one thing to adapt a story to the stage. It was much more to write a play with such nuanced characters and believable family relationships. He showed that talent by elevating ordinary men to tragic heroes again in plays like Death of a Salesman and A View from the Bridge. All My Sons premiered in 1947 and won a New York Drama Critics Circle Award. Film versions were produced in 1948 and 1987. [I once performed the role of Kate in a Wisconsin college theater production of All My Sons, so this play has a special meaning for me.]