A co-production in South Florida 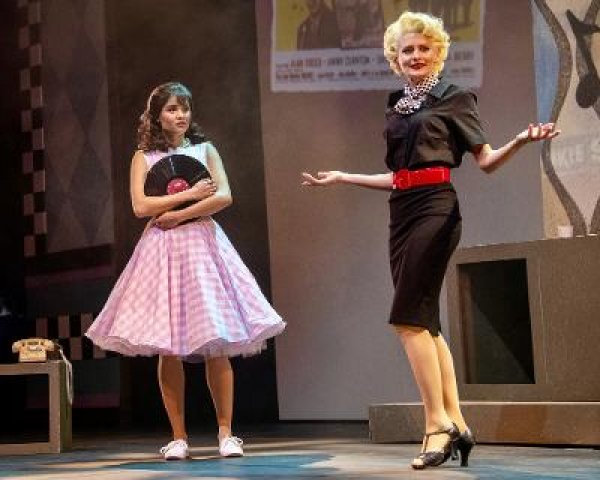 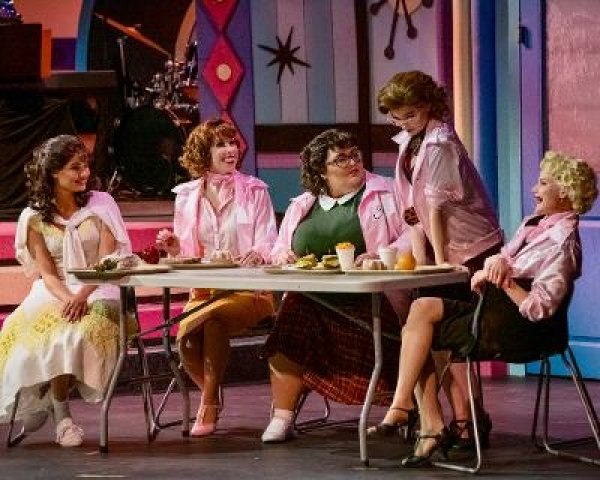 Photo by Amy Pasquantonio/Amatista Photography It is easy to spot the “Pink Ladies” in MNM Theatre Company and North End Theater Company’s co-production of Grease in Lauderhill.

Some arrived at the theater wearing outfits emblazoned with the word “T-birds.” Others came clad in clothing containing the words “Pink Ladies.”

And judging from the large audience’s enthusiastic reaction, all had fun in the company of such characters as Danny Zuko and Sandy Olsson.

If you are a theater, film, or pop culture enthusiast, you have probably guessed that the show in question is Grease.

Fortunately, you have time to catch South Florida-based MNM Theatre Company and North End Theater Company’s spirited professional production of the beloved 1950’s-set show. The production runs through Jan. 30 at the Lauderhill Performing Arts Center (LPAC). Grease is one of three shows that the two companies will present in 2022. The others are Sister Act and Guys & Dolls.

You’re probably familiar with the 1978 film adaptation of Grease starring John Travolta as Danny and Olivia Newton-John as Sandy. While those stars shined in the film, MNM and North End’s production of the original stage musical also features a fine cast. For instance, the performers create their own dynamic and convincing characters without mimicking performances in the film.

For the uninitiated, Grease takes place during the late 1950’s. It focuses on two cliques at the fictional Rydell High School in California. Danny leads the fun-loving, tough-talking T-birds. They are a high school-age group of “greasers,” or young men who grease their hair back.

Meanwhile, Sandy, the new girl in town, tries to fit in with the Pink Ladies. They are a wisecracking group of young women who also like to have fun. Can Danny maintain his tough-guy reputation and enter into a relationship with the sweet and quiet Sandy?

Certainly, part of what draws so many to Grease is the show’s rousing Rock and roll 1950’s music, and the innocence of the decade. However, Sandy and Danny’s wholesomeness also wins us over.

Danny might try to talk tough with his fellow T-birds. But deep down, he is a sweet and charming, easygoing young man. In addition, Sandy is pure and innocent. These are the kinds of people with whom you would want to attend school, or enter into a relationship.

This couple seems made for each other. Therefore, we want them to be together and stay together. But the T-birds present an obstacle. Specifically, in the stage musical and the film, Danny faces a moment that tests the strength of his loyalties.

Over the summer leading up to their senior year of high school, Danny and Sandy experienced a fling. But neither mentioned which school they attend. Naturally, when the two see other at Rydell High, they are surprised. In particular, Danny is with his buddies before class when Sandy and the Pink Ladies approach them. Danny starts talking sweetly to Sandy. Suddenly, though, he feels pressure to act cool and tough in front of his friends. As a result, Danny starts talking rudely to Sandy. She walks away emotionally hurt.

During this sequence in the film, Newton-John made Sandy’s emotional pain palpable. No doubt, people watching the movie ache for the couple to instantly make up. Perhaps some feel anger toward Danny, while others might forgive him. After all, who among us can say we never felt pressure and acted in a way we later regretted?

In MNM and North End’s otherwise mostly commendable production, the aforementioned scene is over too quickly for us to feel much of anything. That is because after Danny is rude to her, Dez’s expression is too mild; it does not sound like Sandy is hurt.

Fortunately, this one weak scene does not ruin the whole show. In fact, other than some sound issues and a late lighting cue, this production is generally strong. For instance, the performers possess pleasant, strong, and expressive singing voices. An energetic-sounding live band accompanies them.

In fact, we hear tunes from the 1950’s even before the show begins. We walk into the LPAC’s auditorium to find the curtain is open. A sign reads “Class of 1959 returns tonight.” Soon, a DJ named Vince Fontaine enters. He interacts with the audience, and plays 1950’s song such as “Tutti Frutti.” As a result, we instantly feel drawn into the world of the show.

In a strong performance, Larry Buzzeo believably and energetically captures Fontaine’s charismatic, flashy demeanor. A gold-colored, sparkling jacket that the performer wears helps to reinforce the DJ’s flashiness (Penny Koleos Williams designed the period-specific, character-appropriate costumes). Speaking of clothing, it is easy to recognize the T-birds from their name-revealing black leather jackets.

Dorian Quinn projects confidence, charisma, and a touchingness as the T-birds leader, Danny. For example, you can sense the ache Danny has to re-unite with his girl when he sings the song “Sandy.” Danny is also among the characters singing “Summer Nights” shortly after the show begins. They sing the number with an appropriate nostalgic-like quality.

Among the other T-birds, Michael Harper is full of comic energy as Roger. And Ryan Michael James brings a surly demeanor to the T-birds’ second in command, tough guy, Kenickie.

Among the Pink Ladies, standouts include Jordan Gonzalez. She is commanding, assertive, and brings toughness to the role of Rizzo. Noticeable tension arises as Rizzo confronts others, including Sandy. To Gonzalez’s credit, she also deftly capture’s the character’s vulnerability. This is particularly true when she sings “There Are Worse Things I Could Do.”

During the performance that I attended, an understudy, Caiti Marlowe, squealed with excitement as the comical Patty. Marlowe, skipping across the stage, imbued this cheerleader with uncontained girlish enthusiasm. Similarly, Ashley Rubin gives a winning performance as the ditzy yet good-hearted Frenchy.

Except for the one scene mentioned earlier, Jonathan Van Dyke’s assured direction highlights key emotional moments. Also, Van Dyke’s deft pacing ensures that the action does not move too fast or too slow.

Under Caryl Fantel’s music direction and Angela Morando-Taylor’s choreography, the singing and dancing is always dynamic.

One might think that a production of Grease would mostly attract people who lived through the 1950’s. But the appreciative audience attending the reviewed performance comprised young and senior patrons. Certainly, that is a positive sign for the future of live theater.

MNM Theatre Company and North End Theater Company’s production of Grease continues through Jan. 30 at the Lauderhill Performing Arts Center, 3800 NW 11th place in Lauderhill. Grease is one of three shows that the two companies will present in 2022. Performances are at 7:30 p.m. Thursday through Saturday, as well as 2 p.m. on Wednesday, Saturday, and Sunday. Tickets range from $45-$65. Audience members must wear masks covering the nose, mouth, and chin in the building at all times in order to attend. For tickets, and more information, visit www.lpacfl.com or www.mnmtheatre.org. You can also call 954-777-2055.