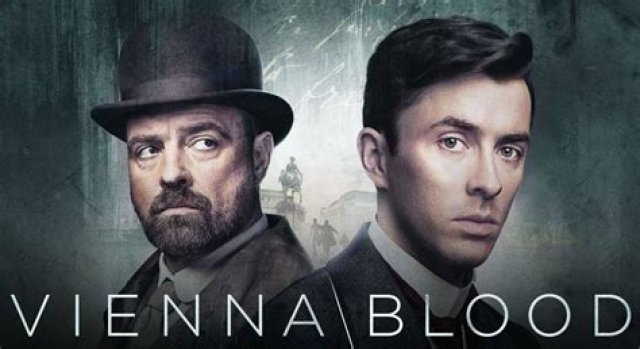 Agatha Christie was the queen of the murder mystery genre hands down. The transfer of her novels to  the stage and film mediums for viewers only increased her fans and followers.  She was the most popular author in history second only to the book authors of the Bible.  However, after seven decades of her plots, characters and clever plot twists her plays are now viewed as dated classics.   They lack the freshness, and challenge for lovers of both feature films and for murder-mysteries filmed as TV series in the 21st century.

New creative players have tossed their hats and talent into producing quality films for American TV audiences.   Only this time the creative story tellers and technical wizards are from Austria, and the UK. Case in point is the new British/Austrian psychological thriller series ‘Vienna Blood”.

It’s beautifully filmed by cinematographers Andreas Thalhammer and Xiaosu Han, as part of Masterpiece Theatre’s TV series that is streaming on PBS on Sunday evenings at 10:00 PM (PST).  The technical camera set ups and shot selections are top tier. Their capturing of Vienna’s magnificent museums, great public buildings and its many architectural landmarks is the icing on the cake of this thriller TV series that keeps the viewer fully engaged right to the end. Series Two is wonderfully directed by gifted Robert Dornhelm.

The series based on British author and psychologist Frank Tallis brings cultural diversity to the table enriching these new stories and the performances.  We’re in the 21st century now, film and theatre art forms today are evolving; sometime even being ahead of the public in many cases.  Gone are the days of Edwardian England where ladies were frowned upon for the sin of ambition by having careers of their own outside the home.  Their place was at home raising their children and pleasing their husbands.

The “Vienna Blood” series has already entered into season two as of January 9, 2022  It is however, still set in Vienna at the turn of the 20th century and features the same terrific cast of core characters from season One.   Screenwriter Stephen Thompson, adroitly stitches the disturbing events throughout the subtle, and the not so subtle, smell of anti-Semitism that wafted throughout Europe that eventually consumed a sub-rosa element in European society.

At first both men have to size each other up. Inspector Rheinhardt believes Max’s youth and lack of police procedures and experience will get in the way of catching this madman. Max, however, feels that Oskar is too rough around the edges when questioning witnesses and suspects in using old fashioned heavy-handed techniques. What is called for, according to Max, is someone with a cool and composed logical mind and intelligence to win the day. One catches more flies with honey than with vinegar. And the beat goes on….eventually the on-stage chemistry between Max and Oskar kicks in and the pair become a formidable crime-solving team.

Max’s financially comfortable parents are portrayed by Conleth Hill as his father, and Amelia Bullmore as his mother, both of whom believe that what their doctor son really needs is a wife and children to fulfil his place in Austrian society.  His sister Leah played by Charlene McKenna, is Max’s protector and supporter at home.  Max’s younger brother Daniel Liebermann is passionately played by Luis Aue, alas he is too young to challenge his parent’s rules and regulations at home.

There are nineteen performers in this excellent TV series along with limited space to list everyone.  However, there are always standouts and “Vienna Blood” is awash with them.  Louise von Finckh as Clara, who has an on and off relationship with Max, much to his parent’s delight, comes close to tying the knot but both young people agree that marriage to one another is not in their futures.

Hospital lab assistant Amelia Lydgate crisply played by Lucy Griffiths catches the eye of Max, but 1900 Vienna, hospitals still enforced the ‘Verboten’ rules of no patty-cake fingers between employees while at work.   Besides, Max has to deal with his tormentor boss, the anti-Semite Professor Gruner, who is deliciously played by Oliver Stokowski, along with the duplicitous Raphael von Bargen as Inspector von Bulow, and Simon Hatzl as the equally venal Police Commissioner Strasser.

Initially the “Vienna Blood” series received mixed review: 56% positive and 44% negative. As a film critic I write my reviews for audiences that were unable to see what I viewed.  Ultimately however, the success of any creative endeavor lies with the audience, and in the case of this series - with a whiff of anti-Semitism. The technical components are superb.  Mathew Beard and Jurgen Maurer will become stars as American audiences discover their talent.

If you missed the initial screening of “Vienna Blood”, don’t despair.  Just keep your eyes peeled for future screening dates and times..  It’s bound to be reprogrammed for later in 2022.